On the evening before the Iwo Jima Flag Raising Anniversary Parade and Ceremony, the Ira H. Hayes American Legion Post 84 hosted a dinner for its guests and honored visitors.

Marcella Gonzales delivered a beautiful rendition of the National Anthem while Post 84 posted the colors.

Commander Urban Giff emceed the event and opened saying, “The heritage we enjoy from Ira Hayes has [resulted] in quite a few Pimas and Maricopas…joining the military because of that example.” He said that with the permission of his family, Post 84 bears his name and carries on “the good example that he has set…for future generations.”

Out-of-state visiting tribes included the Puyallup Tribe of Washington, the Pokagon Band of Potawatomi from Michigan, the Seminole Tribe of Oklahoma, and the Prairie Band Potawatomi Tribe from Kansas.

“The Prairie Band Potawatomi Nation wanted to present this to the Ira Hayes [Post],” said We-Ta-Se American Legion Post 410 member Chuck Jacobson. “This is a real buffalo head from our herd.”

The crowd gasped in wonder as members of Post 410 unveiled the large head of a 3-year-old bison. Commander Giff said it was a great honor to receive such a gift, and he and the other members of the Ira Hayes Post were deeply thankful.

“We’re a plains tribe and this is where we get most of our meat,” said former We-Ta-Se Post Commander Jim Potts. The tribe has almost 450 head of bison in its herd, he said, and the We-Ta-Se Post uses bison meat today to supplement meals for the elders in their community. “It was an honor for us to bring this to you, sharing with our brothers and sisters down here,” he said.

Later, 102-year-old World War II veteran Sgt. Sophie Yazzie presented Tony McDaniel with a personal gift, a Pendleton blanket, to thank him for his support of veterans and the work he does to bring vets together. As the Iwo Jima Event Committee Vice-Chairman and Parade Coordinator with the Ira Hayes Post, McDaniel dedicated himself to make the Iwo Jima memorial events happen.

Giff also thanked McDaniel for all his efforts to support veterans. “We benefit from [his work] every day here in Gila River.”

“This is an awesome gathering of veterans,” he said. “It’s amazing to see all the different tribes here represented.”

While reflecting upon the memory of Ira Hayes and O’otham contributions in World War II, Gov. Lewis recalled the memory of his own grandfather’s brother, Richard Lewis.

“[Richard] was killed in action, January 12, 1943,” he said. “He was the first Pima killed in the Pacific theatre. He was awarded a Purple Heart for military merit [and he] was a member of the First Marine Division.” Gov. Lewis honored his memory the next morning at the parade and ceremony.

Gov. Lewis closed with an excerpt from a letter that Hayes wrote home during WWII: “He wrote on April, 1943, ‘I’m glad that you sent me the clipping about the memorial service in honor of Richard. It must have been impressive where they said Corporal Richard Lewis, United States Marine Corps – first Pima killed in the war for the four freedoms. I wipe tears of pride out of my eyes. Us Indians have so much to be thankful for and so much to gain in this war.’”

Lt. Gov. Monica Antone commented on the track record of O’otham warriors and the deep commitment they share in the protection of our land.

“The Gila River Indian Community and other tribal nations have and continue to have warriors among us. They fought to protect our homeland, our culture, our customs, our community,” she said.

She described the anniversary as a significant annual reminder “of the efforts of Ira Hayes…and his fellow comrades who raised the U.S. Flag at Mt. Suribachi, which became a symbol of huge efforts being exhibited by our military.”

“[She was] a member of the Auxiliary until she came into office,” said Post 84 Auxiliary President Yvonne Davis, “but she’s always with us, no matter what. We’re so proud of her...and she’s done a lot of work [for veterans].”

Later in the evening, the Casa Grande High School Amerind Club performed a dance to honor the veterans and thank them for their service.

Three students from local area high schools won the Post 84 essay contest and read their works aloud, which focused on what it means to have a veteran in their families. The winners were Anesa Barehand, first place, Adrian Thomas, second place, and Ashley Thompson, third place.

The Acoma Sky City Dancers and Singers from the Pueblo of Acoma tribe in New Mexico honored the Post with a series of dances and songs, and the Hashan Kehk Oriole Women’s Basket Dancers closed the dinner with a social dance and farewell blessing. 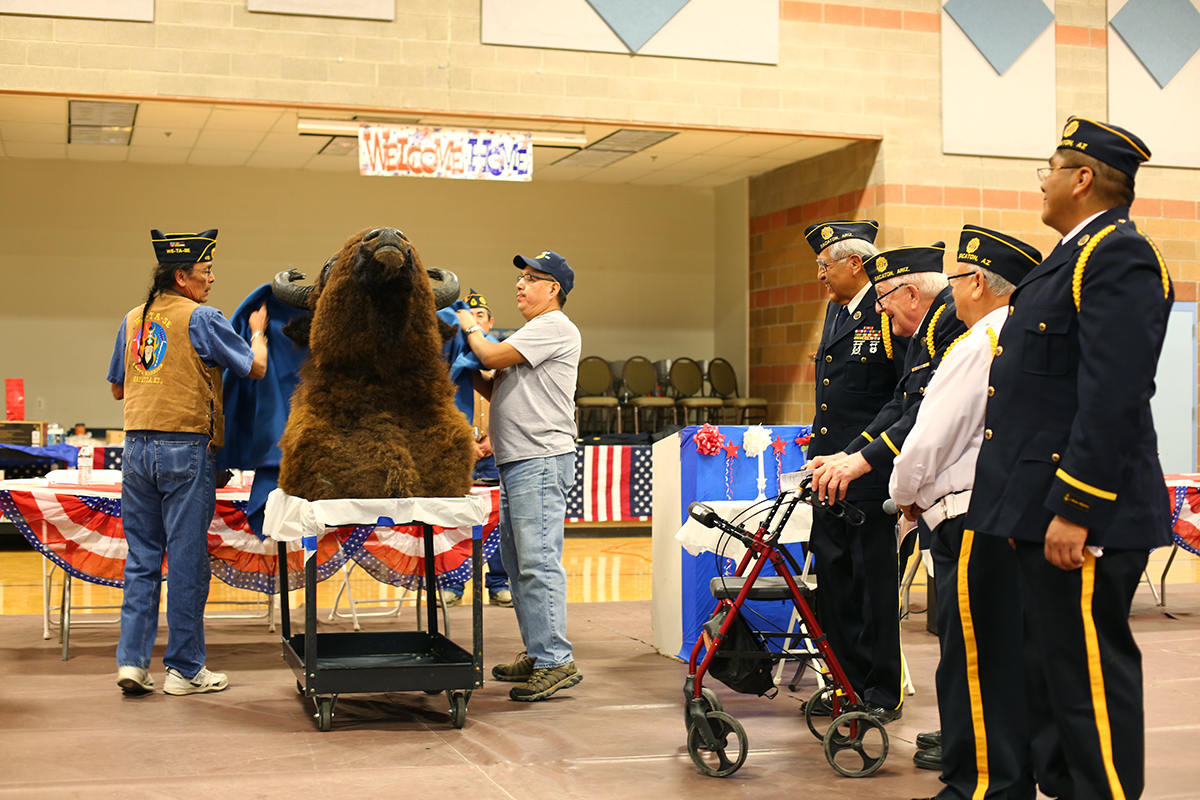 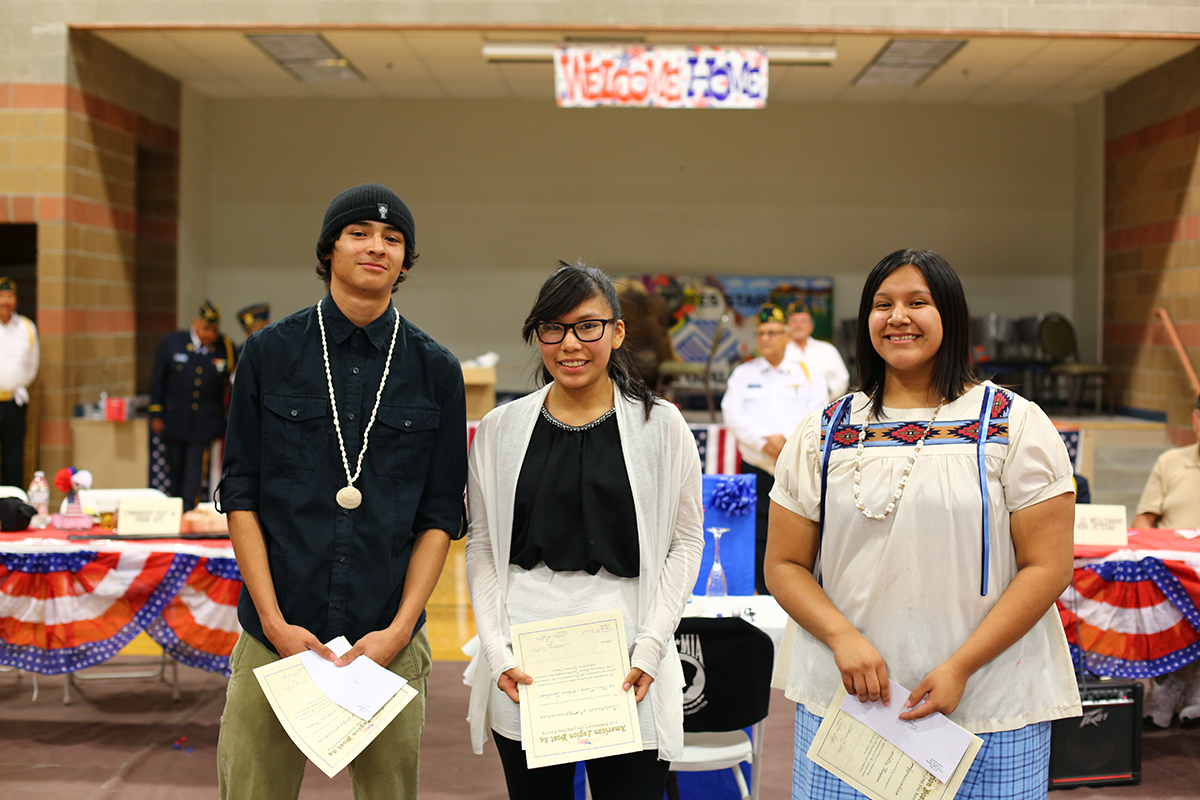 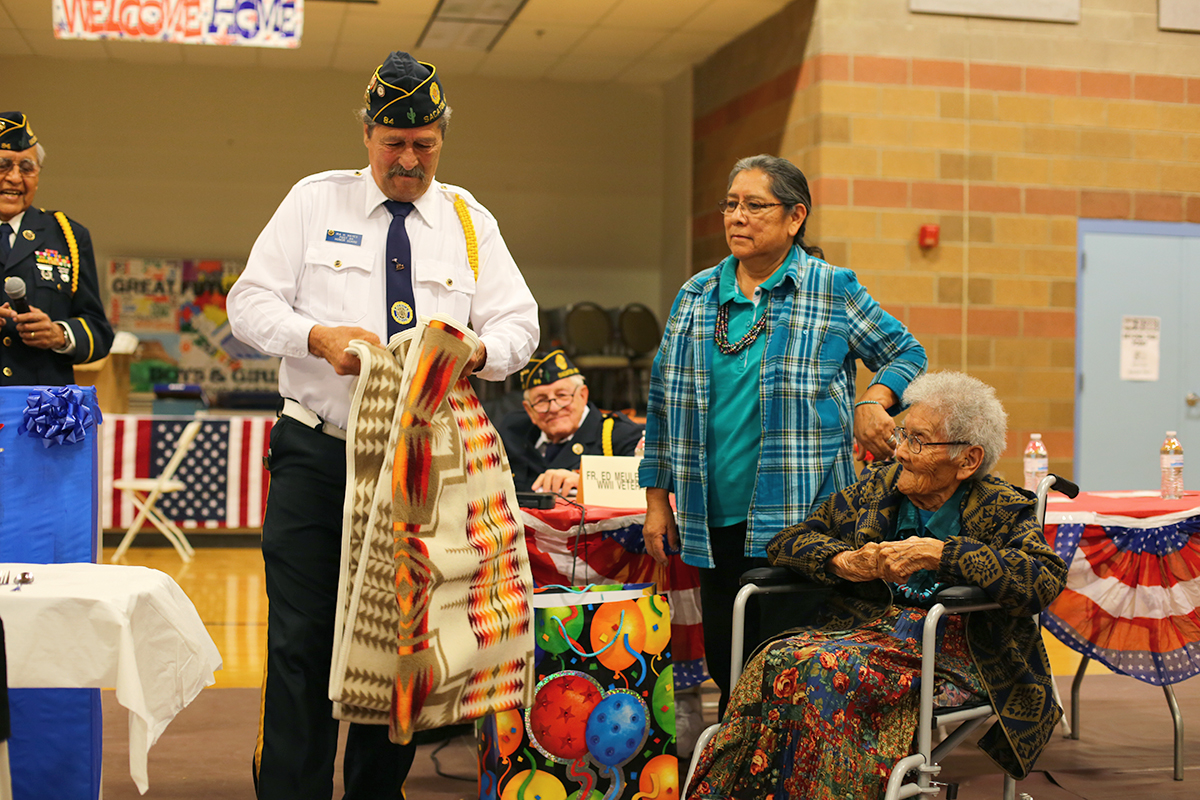 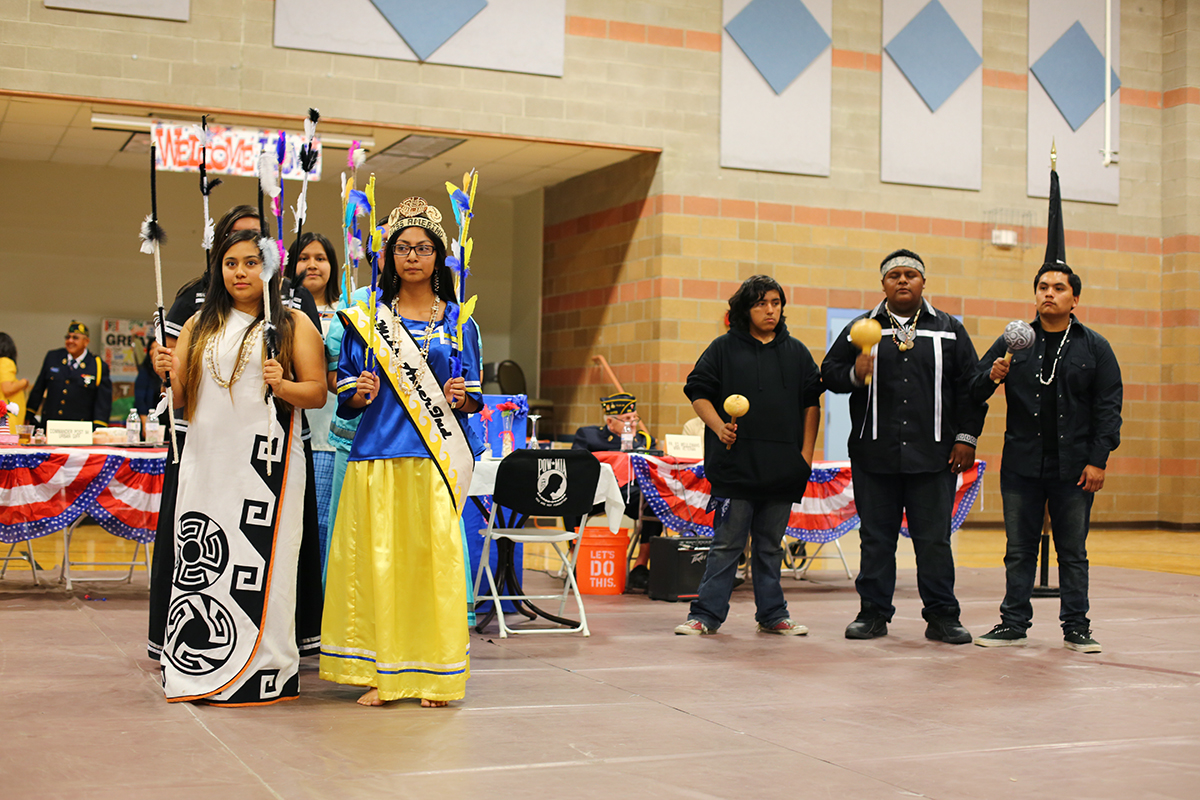 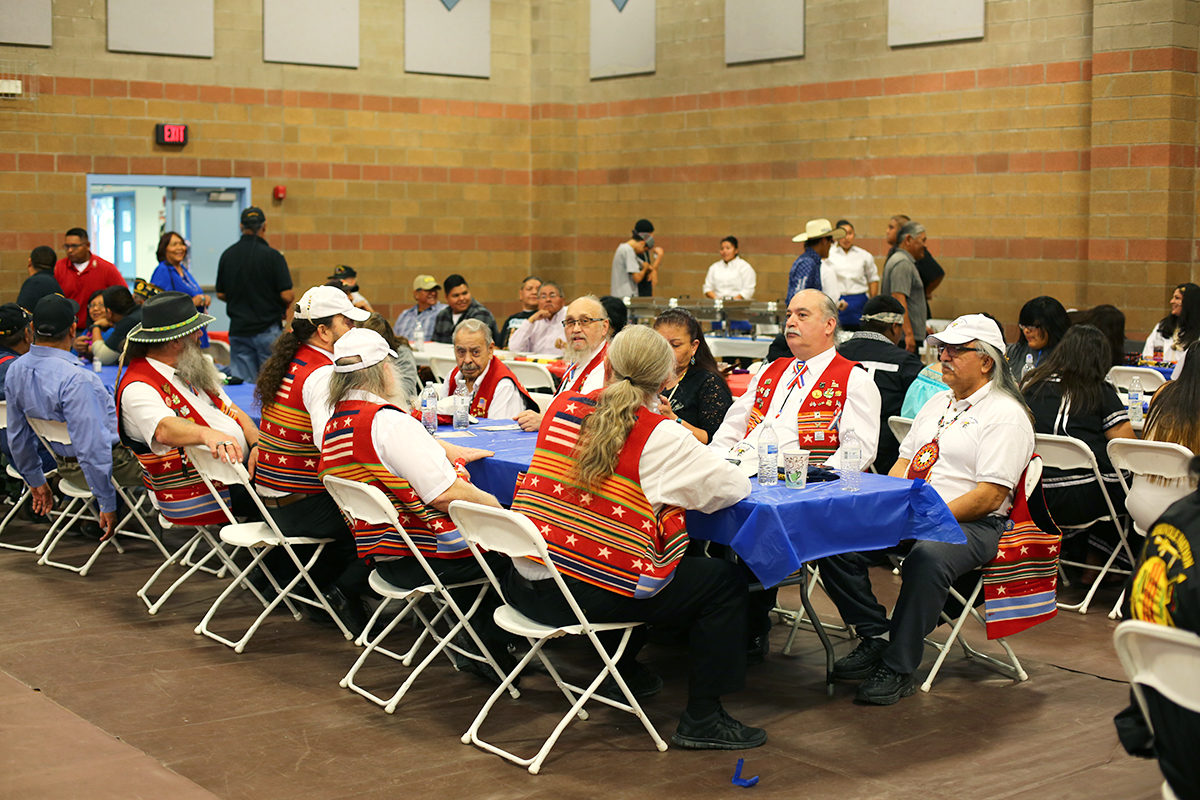 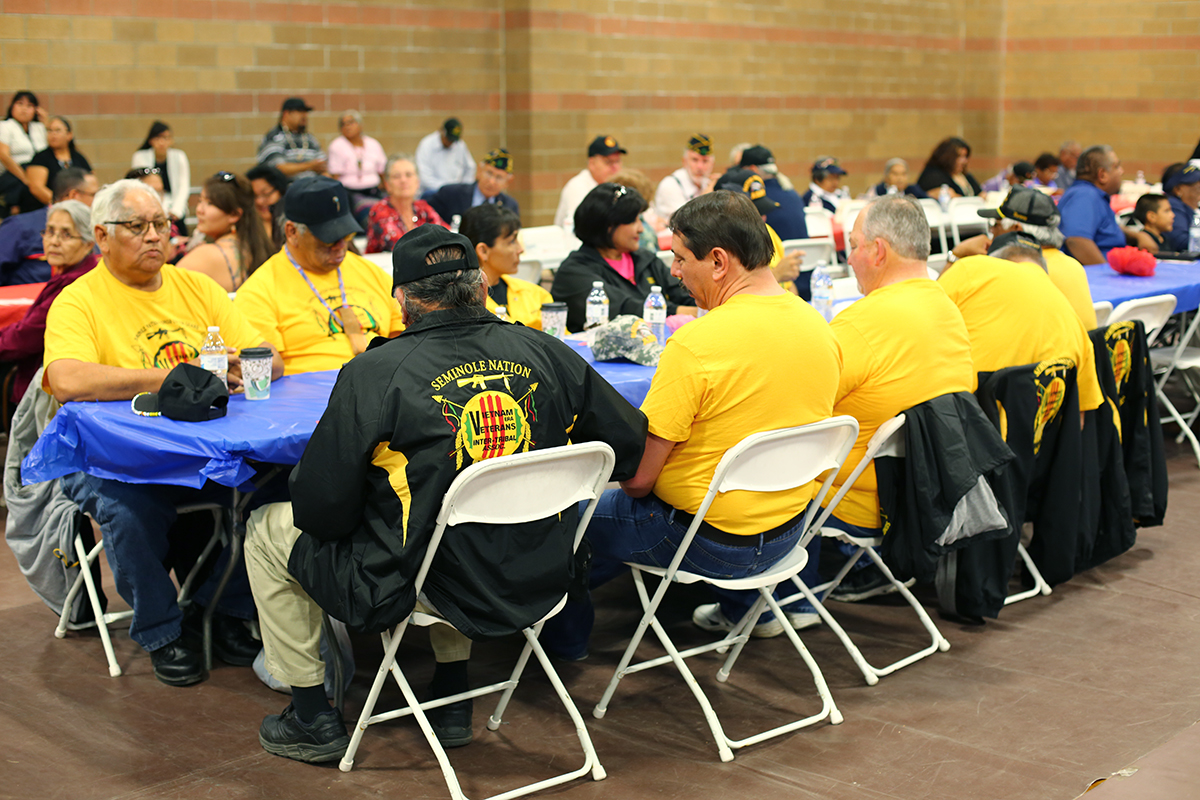