The panel included Bidtah Becker, executive director for the Division of Natural Resources of the Navajo Nation; Gov. Stephen Roe Lewis, Gila River Indian Community; Rebecca Tsosie, Regents Professor at the James E. Rogers College of Law and Special Advisor for the Provost on Diversity and Inclusion at the University of Arizona; and Margaret Vick, Special Counsel for Water Resources for Colorado River Indian Tribes.

Jacob Moore, the Assistant Vice President on Tribal Relations at ASU’s Office of University Affairs, moderated the conversation, asking the panelists about the challenges that tribal communities face when talking about water security.

Water: Not a Zero-Sum Game

“I think one of the biggest challenges moving forward for water management, not just for tribes, but water management in general, is a philosophical mindset,” said Vick. “We still have too many people who see water as a zero-sum game. [For example:] ‘If Gila River has water, Phoenix does not.’ [But] water is not a zero-sum game. It is a shared resource that is, most often, a renewable resource.”

Tsosie said it is very important to consider how the conversation around water security is framed. “The work that I do...is to look at the way that the dialogue about rights is put out into the public.” Tsosie read an excerpt from an April 19, 2015 op-ed by Earl Zarbin in the Arizona Republic.

The selection reads: “More than 51 percent of Arizona’s annual entitlement to 2,800,000 acre-feet from the mainstream of the Colorado River is reserved for Indian reservations, under present law and court rulings. An acre-foot equals about 326,000 gallons.

Water is a shared resource and should be treated as such, not divided up with a winners-and-losers mentality, said Tsosie. “If you look at the water, there are no borders. It is that life force that goes through the land and through all of these areas. So I would encourage all of us to adopt that framework of thinking about water policy.”

Becker said when it comes to tribal water, “You can easily make this conversation, ‘us against them.’ But from my perspective, it shouldn’t be. It’s a shared resource. We all need water. Every human being needs water, so we need to find a way to make that conversation work. … That’s my hope for the future – that our humanity is what brings us together.”

A Seat at the Table

Vick said another challenge is that there are two disparate ways of looking at water: the tribal view and the state view.

“You have a state law system that is based on consumption, and you have a Native concept of water that is based on the importance of water in place, and the value that it brings to life at that place for those people. Those two things don’t work together very often.”

“Tribes have to be at the table,” said Becker, who argued that just being heard is an important first step for tribes. When state or federal-level decisions on water policy are made without tribal input, their interests are not being accurately represented.

Not only that, but the tribes must work together when approaching city, state and federal parties, said Lewis. “You know, we as tribes, we have to stand in a unified position where we need to be at the table. We can’t have our water taken away from us again.”

The debate over how to manage water scarcity continues among scientists, lawmakers and water managers, but often Native American communities are left out of the discussion.

As an example, Vick said, while CRIT has the number one priority right to Colorado River Water, “in broader discussions of drought and how the state of Arizona is going to deal with drought, CRIT is not invited to the table…and that highlights the differences [in the] state approach [to] water and tribal approach to water.

Tribes are speaking up to make sure their interests are considered, but to be heard, tribes need a seat at the table. How do they accomplish that?

“What I think would be productive is to have a statewide accord,” said Tsosie. “So the state of Arizona, for example, signs an accord with all federally recognized tribes in Arizona around notification of things that would happen. So they should be on notice, and they should have an opportunity to attend if they want to, and that should just be, it should just be a formality that is always recognized.”

Until something more formal can be developed, tribes primarily rely on good networking.

“Relationships are critical,” said Becker. “Building those relationships, finding solutions...to develop and preserve the world’s shared resources is critical. We live in a system called planet earth, and that’s a closed system. And water is a shared resource, not just locally, but regionally, nationally, and then even across the world.”

Other challenges to ensuring tribal water security include funding, infrastructure, and climate change, but the panelists did point out some points of hope.

“When I came into [office in 2015], that was one of the things that was very important to me, that we put our water to good use,” he said. “It had been about 10 years since our water settlement passed. … One of my first executive orders as governor was to honor our water, and to…come up with initiatives to use our water, to put our water to use.”

Many of the panelists cited Gila River’s behavior as a model for tribes on how to proceed in working with state and municipal governments on water management.

“Gila River, to me, is the prototype of positive steps,” said Tsosie. “I’m so encouraged by the idea of water storage, aquifer recharge, sustainability, really thinking this through and forming partnerships with a major municipality like Phoenix to actually accomplish goals in common for all of the people here in this area.”

Vick said through its use of water credit leases and groundwater recharge, “Gila River is leading the way on [getting] away from this zero-sum game mentality in relation to water. … And we need to encourage our political leaders, our water management leaders at both the federal and the state level, to adopt that kind of an approach in relation to tribal water rights. It’s not us against them. We are all on the same river, and we are all sharing the same resource.” 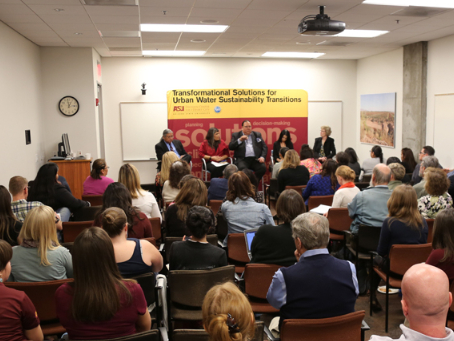