Our ancestors had to be smart to live in this desert, where it’s scorching in the summer sun and sub-freezing on a winter’s night. The key to their success? Adaptability. They knew how to overcome by better design.

Now, a team of architects and designers from Arizona State University is endeavoring to combine the old and the new in a project called the Sustainable Housing Study, which aims to create houses that are environmentally conscious and will endure for generations, but also echo the genius of our ancestors who have lived here for millennia.

Housing on the Whole

It’s no secret that the need for quality housing in Gila River is high, but the goal of this project is not expediency. The team’s objective is to design a new kind of home for Community residents, one that is sustainable, durable, affordable, modern, and intelligently designed to meet the needs of desert dwellers. The project also seeks to respect O’otham heritage by seeking the influence of traditional housing structures and promulgating O’otham culture. The team hopes to develop a number of prototypes of houses at the project’s conclusion.

In a public meeting on June 15 at the Huhugam Heritage Center, project staff sought input from Community members on design and construction materials. The team asked residents what they would like to see in future Gila River homes.

“You can’t have any action on something like this that will affect the Community so much, without the Community’s input,” said project lead Wanda Dalla Costa. “It would be nice if the Community [was a] co-creator of whatever the final product will be.”

Dalla Costa is from the Saddle Lake First Nation in Canada. She said, “I’ve been living a year and a half here and I’ve realized the best people to ask are the people who have been living here for thousand and thousands of years.”

In one classroom at the HHC, Dalla Costa asked Community members to design their ideal home layout by arranging paper cutouts to represent various rooms and other housing elements.

Some said they wanted a kitchen with easy access to a garden. Others placed a vatho on the north or west side of the home with a nearby outdoor cooking area. Several people mentioned the importance of landscape architecture because trees and tall plants provide vital shade and wind blocking.

Dalla Costa said it was a simple exercise to study user preferences, but “through that these amazing stories came out [about] the vatho and how they expected social gatherings and how many people gather and what the purposes of the gatherings are.”

In another classroom, the team was gathering input on preferences of construction materials and techniques.

Architect Joseph Kunkel led the discussion. He said Gila River seems to have a tradition of changing up its building methods and materials of choice, but consistently prefer to build their own and pass on construction knowledge from one generation to the next.

Adobe bricks have been a staple of desert construction for centuries, but by studying traditional methods and materials, designers can extrapolate from the designs of ancient structures and reinterpret them for a new age.

Whether or not the final product does make use of adobe, some reinterpretation of adobe, or none at all remains to be seen. New forms may include fiber reinforced enhanced adobe, a combination of rigid foam and concrete, rammed earth, or prefabricated modular homes. There are many options out there, but as the conversation between Gila River and ASU continues, the team will move closer to a best-fit solution.

When it comes to interpreting traditional forms, said Kunkel, “It’s more about how one would inhabit that space and understand that space.

“I think we would take a similar approach to how we would develop a home for Gila River,” he said.

Dalla Costa said O’otham and Huhugam structures of the past offer principles for contemporary housing. She cited examples such as the vatho, the dense walls with high thermal mass (which keep houses cool in the summer and lock in warmth in the winter) of adobe homes, and partially subterranean rooms, which are cooled by the earth.

“So there are all these principles embedded in all of the precedents that we study,” she said. “To me, you don’t have to recreate the vatho and all these traditional structures, but you can take the principles of them and pull those forward.”

The project is a long-term, multi-year endeavor. Dalla Costa said the team will return for another round of input as their work progresses. She said the team learned a lot from the initial public input meeting last month, and has to go back and work it all into their study before they can develop some samples.

“It’s so much nicer to have something that the Community can review and critique and provide feedback on. So, the aim is to come back…before Christmas [with] some concrete drawings and to have the Community to critique the work.”

The final product or products of the study will be determined by the desires of the Community members who participate in the public input meetings.

Dalla Costa said, “It could be very contemporary. It could be more traditional. I think there’s an endless possibility with how it could be designed, but I think what’s most important is the technology within that. Does it save energy? Is it better for this climate? And I think that, as a person coming from ASU, this is really important to me. If I can reduce the energy bills of a house and it is based on an indigenous technology, I think it’s a win-win.” 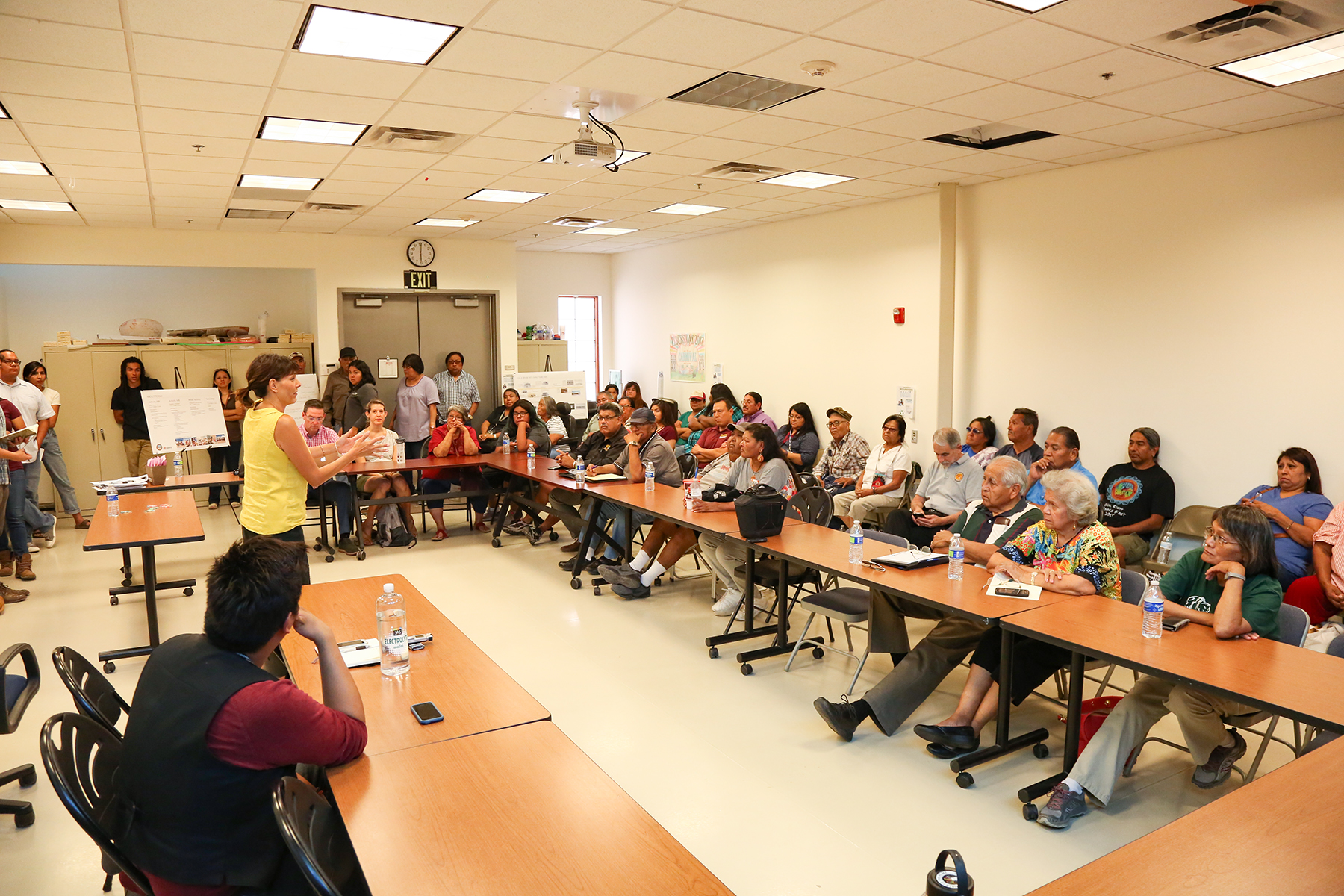 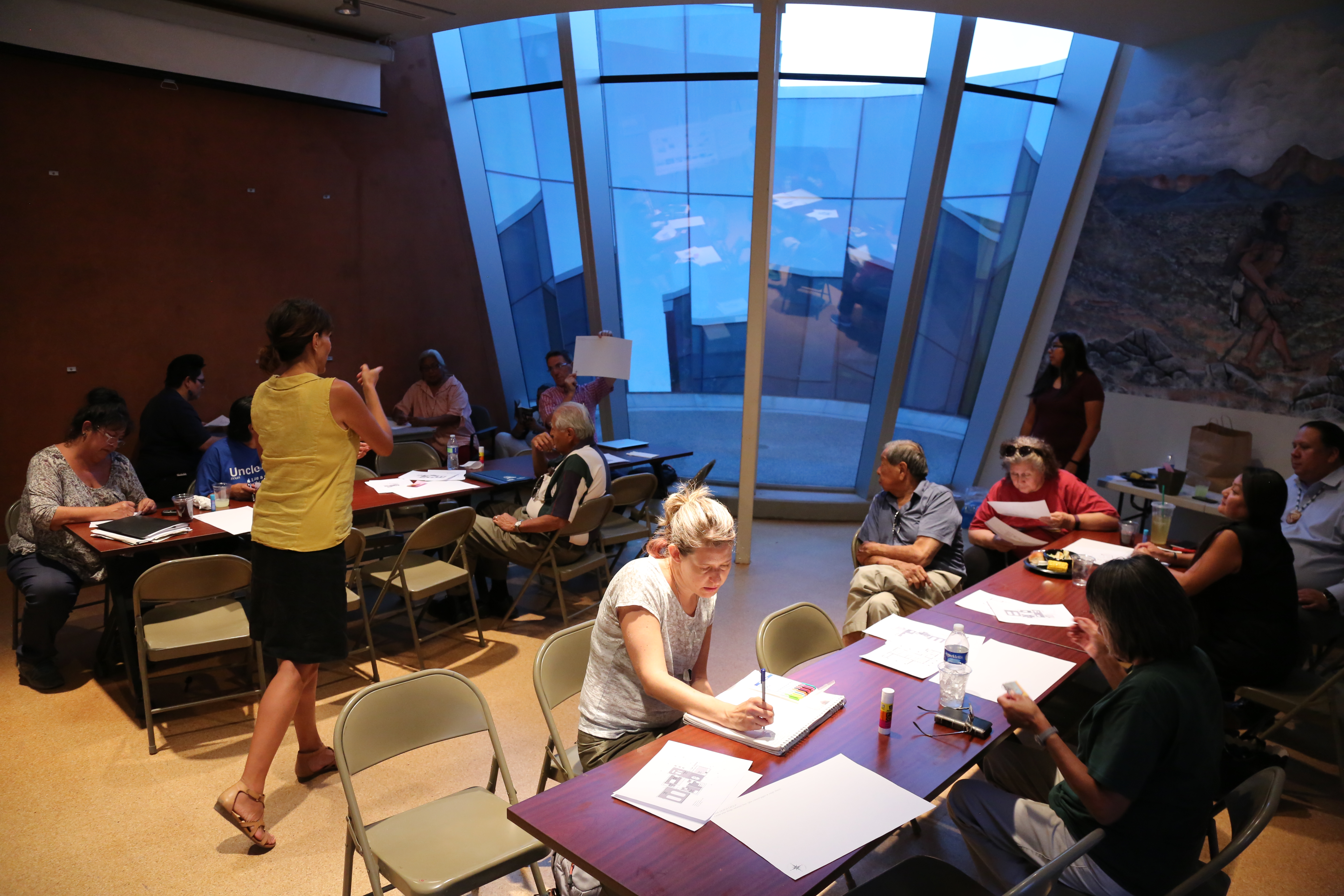