Washing, Bathing and Cleaning in O’otham

In O’otham there are different words used for personal grooming to express the meaning of “wash”, “bathe” or “clean.” For example, one phrase that is often spoken to children is Ha vapkuan heg e no:nov or “wash your hands”.

This phrase makes use of the O’otham verb vakuan ‘to wash’, which in this example is used in its plural form vapkuan. Most verbs (action words) in O’otham have a singular and a plural form that match the number of items that undergo the action (in this case two since both hands are being washed).

The verb vakuan can be used when washing different types of items like individual parts of the body, tools, household items, and even cars and trucks. When you want to tell someone to wash something you use either the phrase Vakuan heg (e) _______ or Ha-vapkuan heg (e)_______ and add the item that you are requesting to be washed at the end.

This is probably because the first word Ha, which is used to indicate the action is happening on a plural item, is not needed as the verb is already in its plural form.

A similar word that is used for personal grooming is the O’otham verb vachvi. Vachvi means to “bathe” or “shower” and is different than vakuan because vachvi implies that you are getting fully immersed in water like when you take a bath or shower. When you want to tell your kids to go take a bath you can say “Him k e vachviñ” or more straightforwardly “E vachviñ”.

Vachvi is more limited than vakuan because its meaning is restricted to people and animals where the whole body is washed as opposed to parts of the body. Nevertheless it is useful in contexts where you want to tell someone to bathe themselves, their pets or other family members.

One more word that is useful to know is kekchuth. Kekchuth is used when talking about cleaning, fixing or repairing something that is broken. It can be used with personal grooming in contexts like brushing your teeth or cleaning your nails.

So when you want to tell your kids to brush their teeth you can use the word kekchuth as in the following phrase “kekchuth heg e tha:tham”. Kekchuth is not used as often when talking about personal grooming as it is more often used when talking about cleaning a house or fixing a car. But as can be seen kekchuth is used in much the same way as vakuan and vachvi.

Now that you have learned (or refreshed your memory) on words for washing, bathing and cleaning in O’otham try using them with your family members. Talk with elders and speakers in your family and find out how they use the words vakuan, vachvi and kekchuth and ask what other words they use when talking about personal grooming.

This month’s word match will test your memory on the phrases you just learned. 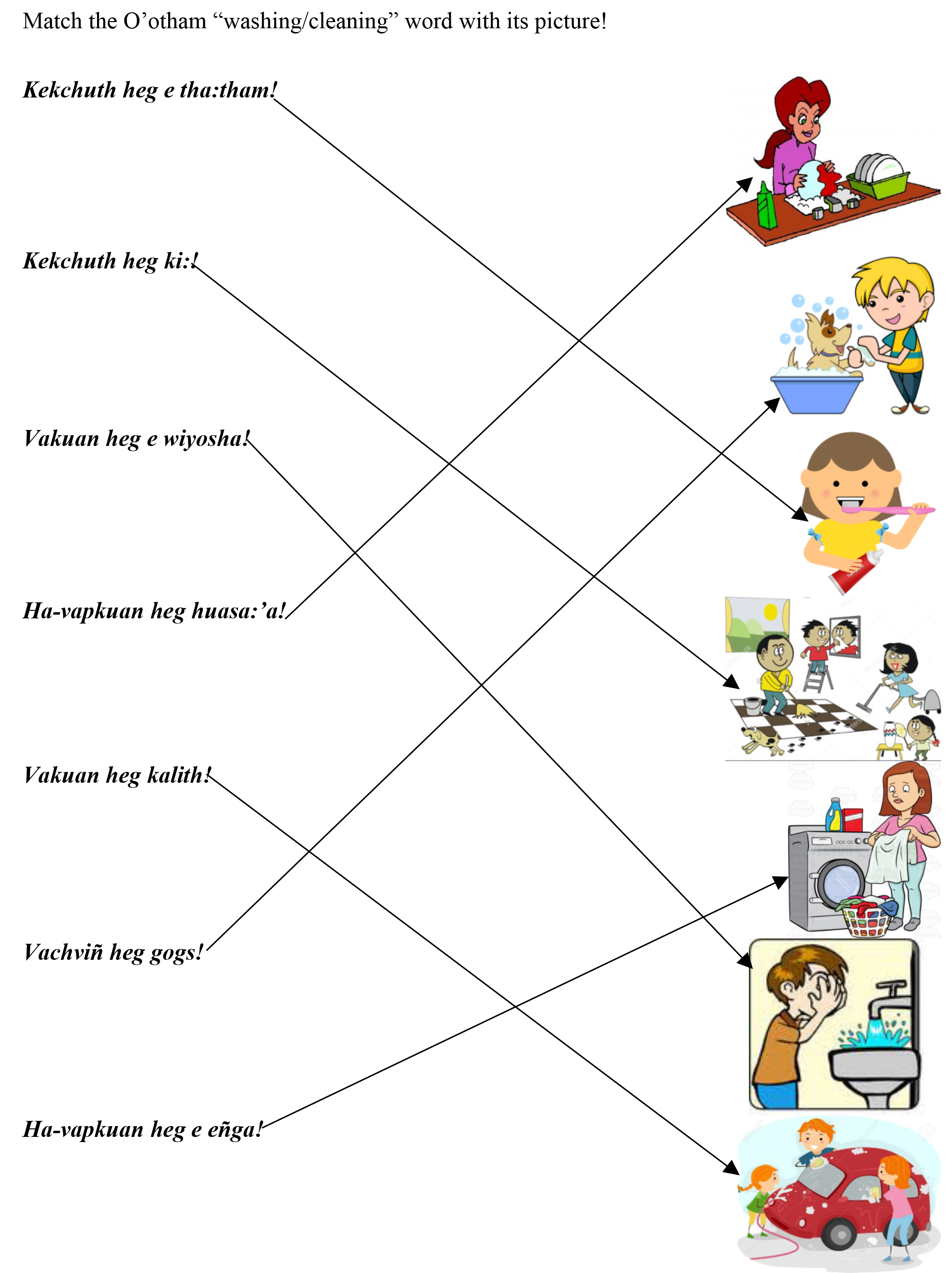