The exclusive design featured the Seven Layer Army logo on the nose of the board. The tail of the board had the logos of the sponsors from Go Skateboarding Day.

The deck holds the exclusive graphic design by Molina. The overall design is based on the desert landscape and enduring the heat. It features a cactus mimicking a hand. Sticking out of the bottom of the cactus hand is a bone and features a “7” at the bottom.

Little icons within the cactus are an owl, star, lightning bolt and a bird. The little icons are what Molina described as “lucky charms.”

The bone represents how strong skaters are, falling down but always getting back up. The “7” at the bottom represents the seven districts of the Community.

“I don’t really tell anyone about them,” said Molina, referring to the symbols. “I like to leave it up to the person viewing it. Anyone that is looking at it will perceive it their own way. I wanted to do something off the wall and fuse together my own artwork style and skateboarding.”

Despite this being the first deck produced by Seven Layer Army Skateboards, they will produce more exclusive designs for upcoming skating events in the Community. However, they will not be available for purchase and will only be available at the specific events that they are designed for.

The decks were produced in California by a small company. Before the skateboarding event, Molina and co-owner Reuben Ringlero did a live unveiling on Seven Layer Army’s Instagram account.

The pair has received positive feedback and general inquiries about obtaining one of the decks. There were 30 boards given out in various sizes on assorted wood colors.

“I wanted to do something different than just giving out t-shirts,” said Ringlero.

For the pair, it’s about giving back to the Community youth. Whether that’s encouraging a healthy lifestyle by skating and being active or helping local kids develop their own passions. Ringlero, a graphic/web/video designer, and Molina, a local artist, allow kids to photograph and record their events to help them find a niche that they want to pursue and hope it inspires them.

The next event that will have a custom Seven Layer Army deck will be the Mustering-In Day Celebration held in the Maricopa Colony in September.

“It’s still kind of unreal that we made a board,” said Ringlero. “I never thought I’d be doing stuff like this when I was skating 10-15 years ago. It’s a very cool feeling to give that back to the kids.” 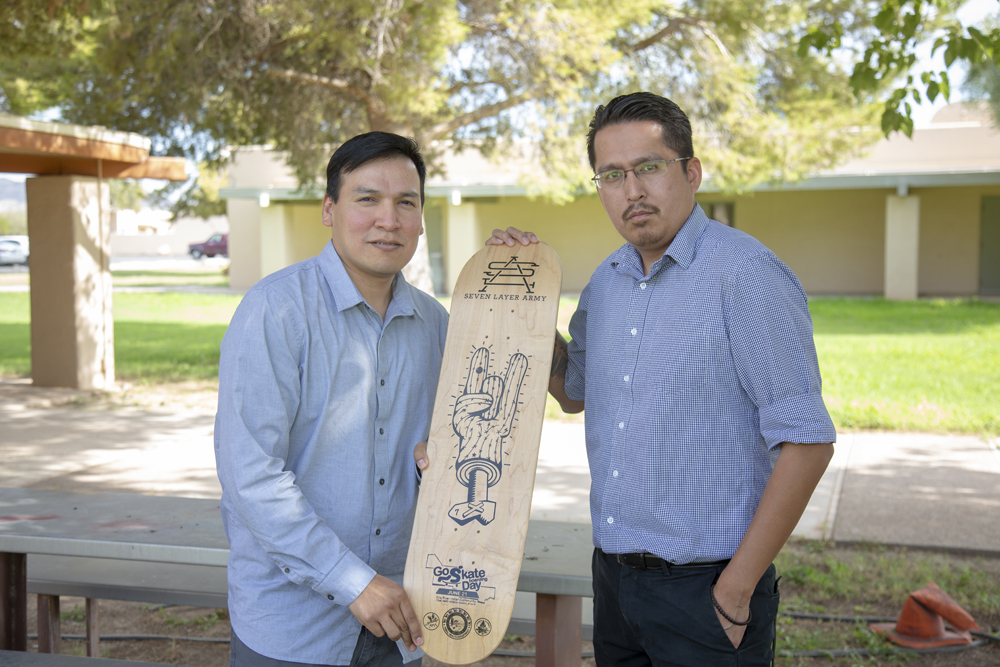