For the many individuals that travel through the intersection of Sacaton and Casa Blanca roads, the empty dirt lot across from the Matthew B. Juan and Ira H. Hayes Veterans Memorial Park may seem of little importance, but once a year it is the start of a historical journey that tells the story of Chief Antonio Azul’s many accomplishments.

As the procession entered the cemetery, the group formed a circle north of Chief Azul’s gravesite, where military and traditional honors were offered.

Master of ceremonies, Pacer Reina said Azul was a warrior, who served in the U.S. Arizona Volunteer Infantry Guard.

To recognize Azul’s service in the military he was honored with a flag raising and singing of the national anthem.

Gov. Stephen Roe Lewis said Azul was, “A warrior, a statesman and ambassador and a person of moral authority.”

He said bringing Community members together on a day set aside to recognize Azul is a way of remembering the legacy he left behind.

One of those lasting influences was Azul’s ability to lead his people during times of hardship and the turbulent history of relations with the government.

Lewis said Azul was an advocate for education, encouraging many GRIC members to go and learn from schools outside of the Community.

Today, his influence on education has given way to the creation of the Chief Azul Scholar award, which recognizes students for their academic achievements.

Azul, known for his military prowess in bridging alliances between his tribe and the Pee Posh, contributed to Arizona’s first volunteer army in 1865 with the formation of Company B and C.

Eight years earlier, a decisive battle was fought, when Azul led a force of Akimel O’otham and Pee Posh warriors into battle against Yuma, Mohave, Apache and Yavapai tribes at the Battle of Pima Butte, also known as the Battle of Maricopa Wells near the village of Sacate.

The battle was one of the largest in Arizona’s history and would be a victory for the Akimel O’otham and Pee Posh, who were successful in repelling the Yuma and Mohave tribes from the area.

Taking from his experience as a military leader, Azul also wielded his political skill in preventing his tribe from relocating to Oklahoma, which would have taken the Akimel O’otham from their ancestral homeland.

Lewis said as a military leader, “Chief Azul united the Akimel O’otham and Pee Posh people. It is a history that is commemorated with the annual Mustering In day celebration, when both people came together to protect our neighbors and community.”

Lewis said Azul was a diplomat as well and one of our first water protectors, he protected our water at the very earliest critical points as we see in our O’otham history.

“It’s important what Chief Azul left for us his teaching, his example of traditional O’otham leadership that sometimes we don’t see very often. We commit ourselves to not forget about those teachings,” said Lewis.

To end the morning ceremony at the gravesite, Gov. Lewis and the family of Chief Azul placed wreaths, while Taps was played in honor of his military service.

After members of the procession paid their respects at Chief Azul’s gravesite, they made their way across the street to District 3’s Head Start building for a hot lunch and musical entertainment. 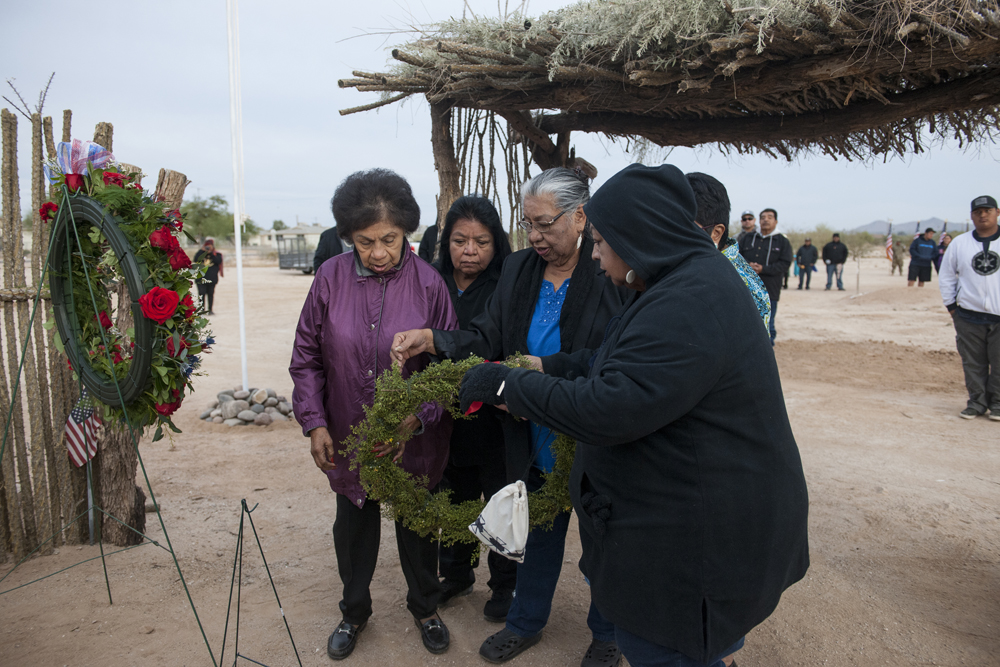