Members from the Department of Environmental Quality led representatives from various federal departments through two of the Gila River Indian Community’s wetland preserves.

They were given insight into their efforts by DEQ Aquatic Scientist Charles Enos and Pima-Maricopa Irrigation Project Assistant Public Involvement Specialist Henrietta Lopez.

Enos talked about the transformation of the wetlands into a thriving environment that is home to native plants and animals.

Benford said Lopez talked about the Community’s cultural ties to the wetlands, which provides many materials used by the Akimel O’otham for several traditional uses.

About the Urban Waters Federal Partnership

According to the UWFP website the program assists communities in the revitalization of water ways by providing sources of funding and increased collaboration with the partner community.

Its mission is to partner with and engage with community stakeholders by strengthening those ties and in the process, assist with community organized initiatives, to achieve long-term goals.

Benford said the UWFP group was impressed by the amount of restoration and how it has been achieved through minimal funding.

The wetlands are an integral part of the neighboring cities and agencies that view the wetlands as a vital natural habitat to native plants and animals.

Akin Gump Policy Consultant Steven Heeley said the visit is part of a larger project that involves several municipalities, who have a stake revitalizing the Rio Salado river system, includes the Community.

A conglomerate of various entities, the project led to the establishment of a UWFP for the Rio Salado river system.

“Both Senator John McCain's office and Arizona State University reached out to various departments,” said Heeley, “The outcome of previous discussions was, that there was interest in coming out and doing a site tour for various representatives of all of those agencies.”

The project’s proposal involves the development of parks, bike paths, bridges, habitat restoration, flood management and associated river enhancements that will be developed along a 45-mile stretch of the Salt River corridor.

A success story in the wetlands

Heeley said several state and federal agencies are interested in learning about how the Community has been able to revitalize their wetlands.

Their success story has garnered interest from Arizona Fish & Game and the U.S. Forest Service on the possibility of bringing in the Community to assist with projects of a similar nature.

Along the banks of the Salt River, when development is underway, Heeley said, DEQ’s knowledge on wetland restoration could be an invaluable resource for the Rio Salado project.

“There’s an opportunity to provide an exchange of ideas and methodologies and exchange best practices with some of the neighboring parties,” said Heeley, “From the tour, people were very interested in what the Community has done in terms of developing these wetlands.”

Benford said the tour is a promising sign of the cooperation that is ahead between the Community and the UWFP, because it will help with many of the DEQ’s initiatives to revitalize the area.

Benford said the wetlands are unique because they have a strong cultural connection with the people of the Community.

Benford said, “It is evident the Community has an emotional and spiritual connection to the area.” 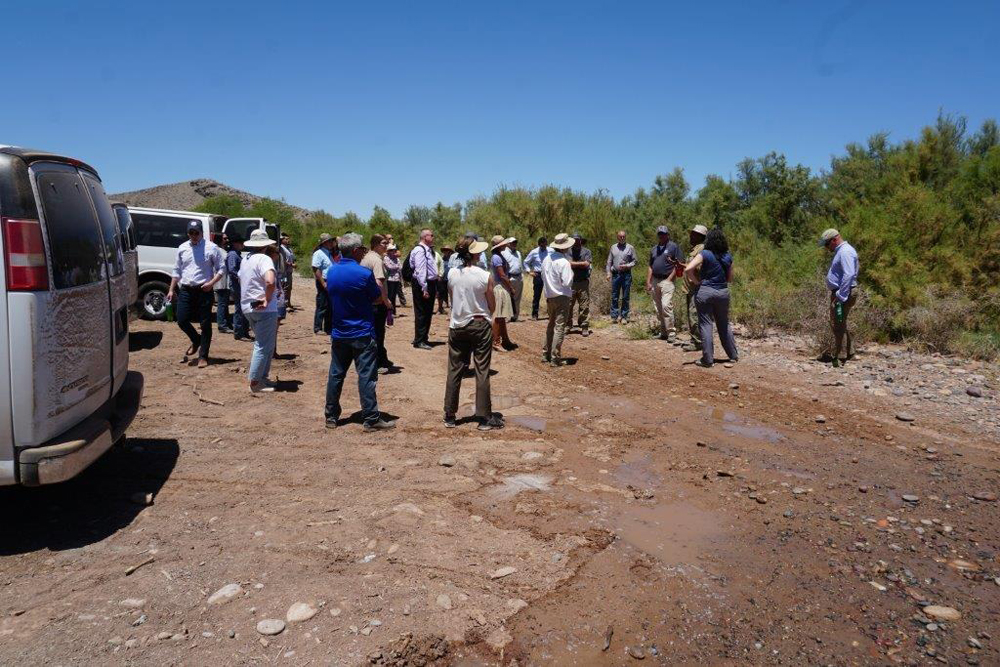