The Huhugam Heritage Center held its Museum Grand Opening to the public on Friday, Jan 24. Community members and guests celebrated the museum’s opening with blessings, remarks, a ribbon cutting ceremony and entertainment. Guest speakers, former GRIC leaders, and Heritage Center administrators provided remarks to honor the occasion. O'otham and Pee Posh singers and dancers from across the Community also presented throughout the day.

“My father saw the opportunity to build a repository, not in Phoenix, not in Flagstaff, but here on the Gila River Indian Community and bring our sacred artifacts home.”

Gov. Lewis later cut the ribbon accompanied by Huhugam Heritage Center staff, Gila River Royalty and former governors Richard Narcia and Donald Antone. With the the doors officially open, the public walked through the new space, which included the collections, displays, and exhibits on the history and culture of the Akimel O'otham and Pee Posh.

Shirley Jackson, District 5, Huhugam Heritage Center Director, said, “It's been a long time coming, and I'm very grateful for its completion, to the Community, and it’s past leadership."

Former governor Donald Antone recalled the repatriation of remains and other cultural objects during his speech and also said how proud he was to see the renovations on the museum, which was closed for contruction on May of 2018.

The musuem building now has an open concept, and two levels for patrons to experience the rich history of the Community. Tools, weapons, clothing, musical instruments are displayed, including O'otham baskets and Pee Posh pottery.

The renovations also include modern and interactive exhibits for digital learning. Video footage of the community waterways is showcased on a 20-foot display, and a touchscreen “game” provides lessons on the O’otham gender roles, and a video provided a brief history of the Akimel O'otham and Pee Posh.

Breaking ground on the original site in 1999, the Huhugam Heritage Center served initially as a repository for artifacts and items that were returned to the Community over time.

Plans for the Center include the addition of a museum gift shop along with developing the surrounding grounds outside the Center.

Jackson shared that starting in March, the museum will open full time with regular hours for the general public. Until then, the Center will continue its First Friday events every month, elders day event, and veterans activities. 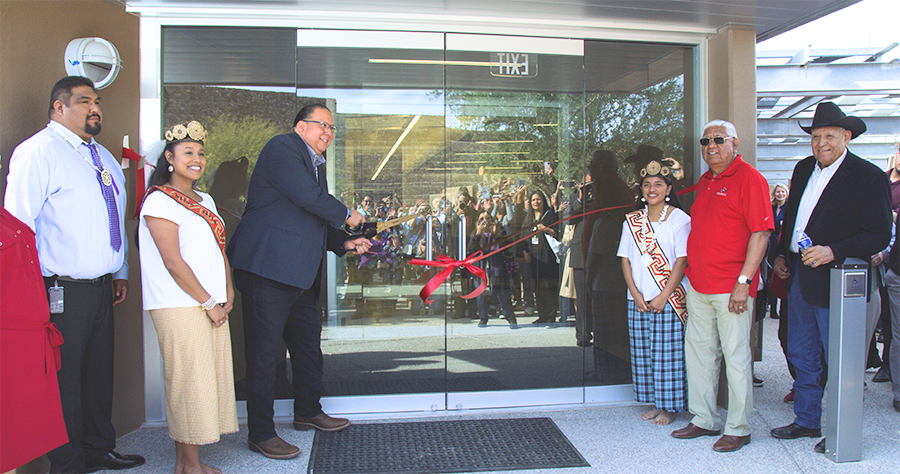