DEQ remembers the work of the late Charles Enos

On June 21, 2020, the Gila River Indian Com- munity lost one of its true environmental stewards. Charles Enos was from District 6 and worked with the Community’s Department of Environmental Quality for 18 years as an aquatic scientist. He was a visionary focused on the restoration of the environment to when the Gila River owed in its riverbed. For Charles, this effort included studying, preserving and restoring riparian habitats within the Community, as well as management and protection of the wildlife of the Community. His efforts led to the Community’s first environmental easement, which expanded in 2015 to include the Pee Posh Wetlands and Gila Wetlands to ensure protections of the wetlands. His other passion included sharing his knowledge with others because he knew the only way to truly preserve the environment was by empowering others with the knowledge to carry on this work by future generations.

For a decade, Charles was the lead for the Community’s Annual Winter Bird Count a well-respected activity both within and outside of the Community. The Bird Count draws in our families, pro- motes environmental education and has collected two decades of field data regarding the migratory birds within our Community. This information is important because birds are an excellent measure of the overall health of the environment. The Bird Count is also a major opportunity for traditional dance and storytelling. Gila River youth are connected to their culture through elders who attend the annual Bird Count to share their knowledge and wisdom during the cultural celebration and lunch that take place after the count of birds in the field is concluded.

Charles also worked on bobcat, javelina, wild horse, and other wildlife issues for the Com- munity prior to the development of DEQ’s current wildlife program. To sup- port wildlife work on the Community, Charles was instrumental in completing a critically-needed Memorandum of Understanding (MOU) with the Arizona Game and Fish Department. This allowed for cross-jurisdictional wildlife management between State and Tribal lands for effective wildlife management.

Charles’ work restoring our precious riparian areas has trained and involved many members of the Community and other Tribal Communities throughout the country. This hard work, which was often backbreaking, has helped the Community in its ongoing efforts to “Return of the River” program under the Community’s 5 Year Water Plan.

In 2019, the U.S. Environmental Protection Agency and the Regional Tribal Operations Committee of tribal representatives recognized Charles by giving him the highly-respected Conner Byestewa Jr. Award. In receiving this award, Charles recognized his colleagues in the DEQ, the Community members who did so much work on projects, including the Community Basket weavers, and Community leadership for their support.

Speakers at the award ceremony noted that Charles was a person who never gave up. At a meeting with a governmental wildlife agency, Charles asked for funding for the effort to build a wildlife management program at GRIC. Some of the attendees said ‘good luck getting money out of this agency’ but Charles never gave up and he eventually got the funding. Because of the riparian restoration work that Charles championed, our basket-weavers are now able to access native plants, as they did for centuries, and we once again have eagles nesting on our lands.

When Charles spoke at the award ceremony he talked about the program to protect the eagles within the Community:

“The return of the eagles to the Community and the success of the breeding program, is a miracle. It was a joy and honor for me to hold a baby eagle in my hands for the first eagle banding in Pee Posh. In 2012 when we lost two eagles in a wild re in Pee Posh, the District 7 Com- munity buried the eagles in the Pee Posh wetlands with full honor. They sang gourd songs all night long and buried the eagles in the early morning, carrying them to the Wetlands burial site, in a horse-drawn wag- on. I was honored to be a part of it all.” 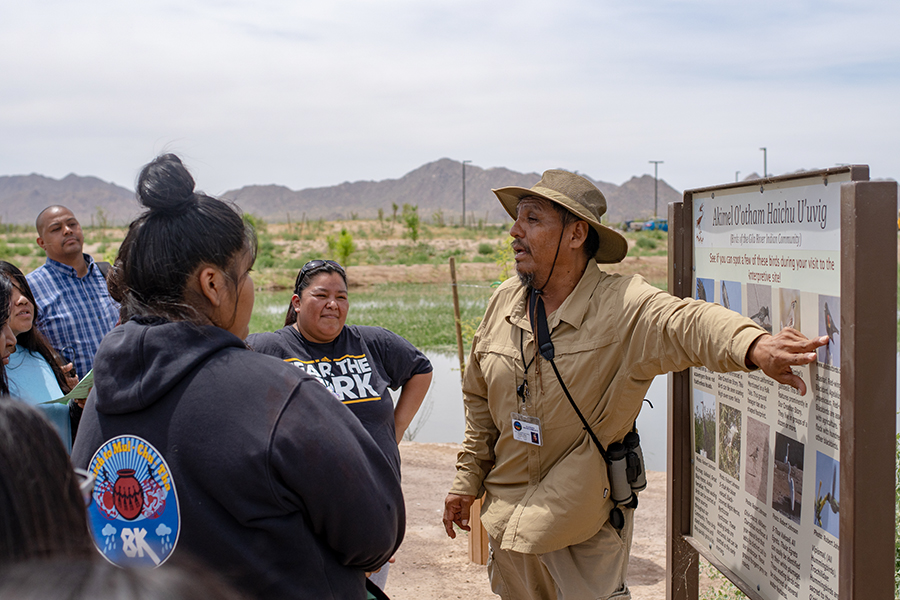