Deirdre Copperfield looks to make her mark as Jr. Miss

At 16, Deirdre Copperfield, Jr. Miss Gila River 2016-2017, demonstrates character and class beyond her years. She received her coronation with confidence and congeniality, a reflection of her even-keel demeanor and a prime example of her qualification as royalty.

“I’m very blessed to say that I am given this honor,” she wrote in an email.

Deirdre grew up in District 5, raised by her parents David Copperfield and Rechelle Jackson, and is the youngest of four girls. She attended St. Peter Indian Mission School for elementary school and transitioned to Centennial Middle School in the seventh grade. Now she is a sophomore at Casa Grande Union High School.

In middle school, Deirdre played violin and was on the softball and basketball teams, but when she got to high school, she said, “I got more interested [in] other school things such as clubs.”

Deirdre is a mentor for the Big Brothers, Big Sisters Program in Sacaton, where she mentors a “little sister” and a “little brother,” and she is an active member of the CGUHS Amerind (American Indian) Club. On weeknights, if she’s not at club meetings or BBBS, Deirdre spends time after school wisely budgeting her time and finishing homework early.

Now she can add GRIC Royalty to her list of extracurricular activities.

“It’s good to see her involved in something,” said Rechelle. “And it’s good to see the progress here in our tribe...it makes me feel proud to be a member of our Community.”

Her parents describe Deirdre as self-reliant and outgoing.

“I would say she got that from going to public school [and] getting out of her comfort zone,” said her father, David.

Deirdre agrees that public school helped her come out of her shell, but credits her grandmother as her greatest influence. She was always close with her grandmother, Darlene Jackson, who helped raise her and her sisters.

“She always treated everybody with kindness. She didn’t judge anybody, and I really took that in,” said Deirdre.

Sadly, Grandma Darlene passed away on Christmas Eve, 2014. Deirdre chose to honor the memory of her grandmother in the pageant with a traditional dress in purple.

Deirdre stood apart that night, not just because of her beautiful dress, but especially because of her tremendous singing voice. For a traditional talent, she sang the Blackbird Song and surprised nearly everyone in the audience, including her own parents.

“Her voice was so powerful and she sang so confidently, it was a proud moment that day,” said Rechelle.

Deirdre began taking choir classes in high school, but hadn’t shared her talent with others until the week of the pageant.

The week leading up to the Miss and Jr. Miss Gila River Pageants is a challenging time.

Contestants spend a lot of time together learning about the Community and preparing their presentations. It’s a competition, but it’s a friendly competition.

That week, Deirdre turned 16 and turned down her parents’ offers for a birthday party, choosing instead to focus on pageant preparations.

“Even though Oriana is older than her...she and Oriana are [good] friends,” said Rechelle. “As parents...we have a good family bond there.”

Like any teenager, Deirdre’s favorite pastimes include hanging out with friends and family. She likes movies, music, and reading fantasy and sci-fi books, but said she’ll read anything “that’s interesting and something I could learn a few things from.”

“I would just like to thank everyone for all the support that they have given to me and all advice that I have been given,” she said. “I’m just looking forward to learning more about the Community [and] representing the Community well.” 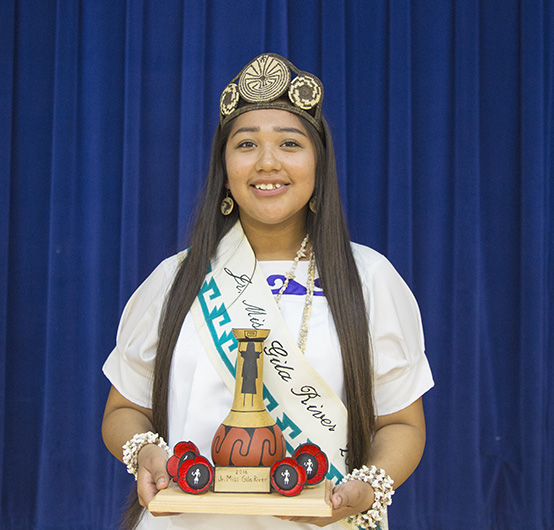