As Oriana Apkaw starts her reign as Miss Gila River 2016-2017, she is ready to continue the long tradition of talented young women representing the Gila River Indian Community.

She is the daughter of Kevin Apkaw and Cynthia Garcia and is from Lower Santan in District 4.

Apkaw is 22 years old of Akimel O’otham and Tohono O’odham descent and is very much involved with learning about her heritage and the Community.

She’s big on all things Arizona State University and likes to root for her favorite team the Arizona Cardinals and is not one to steer away from rodeo competitions.

She places a lot of emphasis in learning O’otham traditions from her grandmother Eugenia Apkaw and her mother Cynthia.

At the recent 54th Annual Mul-Chu-Tha Fair & Rodeo, Apkaw experienced the grandeur of the fair and got to know many of the Community members in attendance.

“I thought to myself [wow]. It was such a humbling feeling, because I represent all of [these] people [here],” she said.

Looking back at the Miss Gila River pageant she talked about how proud her family was and that it was especially memorable to have her grandmother present.

Apkaw said her grandmother was instrumental in helping her prepare for the pageant to help her understand more about the Community’s culture and activities most youth aren’t aware of like picking and cooking of the prickly pear and the assembly of the ku’ipad (harvesting stick).

“My grandmother made [me] realize how important it is to speak the language.”

She isn’t apprehensive about being looked upon as a role-model. She said that many considered her a good candidate for the MGR title because of her involvement in numerous extracurricular activities like softball, basketball and rodeo.

Currently she is a sophomore attending Tohono O’odham Community College in Sells, Ariz. on the Tohono O’odham Nation to obtain a degree in Liberal Arts.

After she completes her degree program at TOCC, she will be transferring to ASU in the fall to major in Anthropology.

“Once I graduate I’ll be back up [here], I’m excited to be transferring [there] after I complete my program a TOCC. I’ll be closer to family,” said Apkaw.

Her decision to major in Anthropology is inspired by memories of her family’s involvement in the reburial of excavated remains that were given a new resting site and she wants to have a career that will connect with the Community’s ancestors.

Her platform will focus on advocating for greater involvement of the youth in health and wellness and learning about traditional O’otham foods to eat.

“If we can bring more awareness about [it], we can bring our healthy foods back into [our] daily diets,” she said.

In addition to promoting traditional healthy foods, she also wants to bring attention about how to build a higher self-esteem mentally and spiritually.

Her earliest recollection competing in rodeo was around age 4 or 5 as a wooly rider or riding sheep.

With a horse and rope in hand, she is a regular competitor in the team-roping event with her mother working as the “header,” the one who ropes the head of the steer.

“When I travel to All-Women’s Rodeos I actually do steer riding, that’s [my] thing,” said Apkaw with a smile.

Despite a lot of her accomplishments and talents, Apkaw doesn’t view herself any different from her peers. 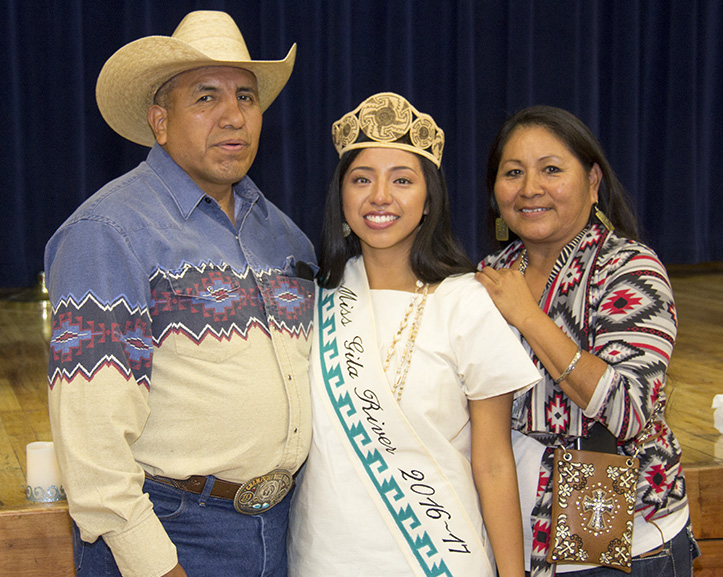