Blackwater Community School will soon be a hubbub of activity as construction crews begin to raise new school buildings including 14 classrooms, a cafeteria, and multipurpose building. The new campus will be able to house 520 students.

At a regular meeting of the Community Council on April 6, BWCS principal, Jagdish Sharma announced that the school received approval of funding from Acting Secretary­ — Indian Affairs, Lawrence Roberts, for campus-wide replacement.

“This was received late last night from the [United States Department of Interior],” said Sharma at the Council meeting. “We are very pleased and excited that Blackwater School was one of the ten schools who [received] funding for the [new school] construction,” he said.

In July of 2015 the Bureau of Indian Education (BIE) began telling Native schools around the country if they required a new school, they could submit an application to have one built, as long as several criteria were met.

One, if a school is educating 75 percent of its students in modular buildings and two, if a school is more than fifty years old or receives a “poor” Facility Condition Index Rating, they may be eligible for school replacement.

Sharma said that BWCS met all of the criteria with 85 to 90 percent of the school’s students being taught in modular buildings, and the school being well over 50 years old, having been originally built in 1939.

Of the 183 BIE elementary and secondary day and boarding schools, just 78 met the required criteria. Out of those 78 eligible schools, only 53 submitted applications for campus-wide replacement.

With the support of GRIC, BWCS fought its way through the screening process earning a place in the top 10 priority schools for campus-wide replacement.

On Feb. 2, BWCS officials along with GRIC Councilmen Arzie Hogg and Joey Whitman, traveled to Albuquerque, N.M. to present their case before the National Review Committee (NRC), a committee formed to determine which schools would be approved for new school construction.

“Councilmen Hogg and Whitman were both there…representing the Council, the Education Standing Committee, and the Community,” Sharma said. The presentation was 30 minutes long with a 20-minute question and answer portion in which Councilman Hogg stood and provided answers to several technical questions. This helped assure the NRC that we as a school are ready and that the Community is providing full support to BWCS, he said

“On behalf of the children, the parents, the Community, the District that we serve, we could not have done this without your support,” said Sharma to the Council. Sharma then extended his thanks to all previous and current Board members including the administration who, he said, worked very hard.

In response, Gov. Stephen Roe Lewis congratulated Blackwater Community School’s staff, both past and present, for their hard work in garnering funding for school construction.

In an Office of the Assistant Secretary – Indian Affairs news release, Roberts said, “Providing access to a quality education is a priority for this Administration. Release of this school replacement list identifies academic facilities in the poorest condition that need to be replaced, and will begin to address the crisis we currently face with regard to the condition of our schools.”

Funding for campus-wide replacement will pay for the planning, design, and construction of the new schools. The order in which schools are replaced will be determined by an overall condition of each school’s “shovel-readiness.” Over the next several weeks BIA will inspect each school and determine the order in which they will receive replacement funding, stated the news release.

BWCS officials highlighted to the NRC during their February presentation that the school is shovel-ready, with most of the basic infrastructure for construction already in place. The time–frame for complete school construction, from beginning to end, will be about 12 months.

The BIE School Replacement Program list for campus-wide replacement are: 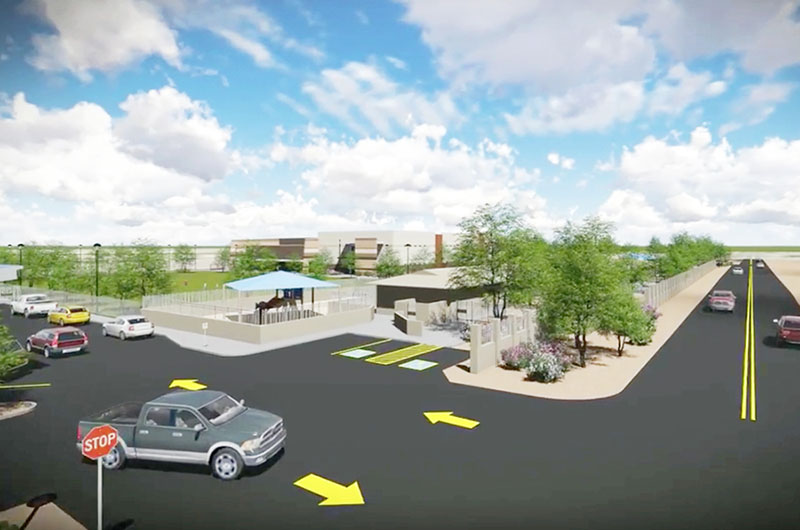