GRIN Articles > What is the Tribal Constitution Reform Project and what influence has it had on the upcoming vote?

What is the Tribal Constitution Reform Project and what influence has it had on the upcoming vote?

The Tribal Constitution Reform Project began in 2006 as a way for the Gila River Indian Community to assert its sovereignty as a tribal nation and actively pursue self-determination through the reconstruction of its Constitution (adopted in 1960) to better suit the Community.

The project lasted several years and conducted numerous public outreach efforts (through meetings, surveys, presentations and open forums) to gather Community member input. In the end, the TCRP recorded dozens of changes recommended by Community members and used the information to develop a new “Draft Constitution” incorporating those changes. The Draft Constitution was never voted on (and thus never adopted), but the proposed amendments in the Draft Constitution have remained a priority and provide a basis for the upcoming special election and future proposed amendments.

All of the proposed amendments on the May 3 special election ballot come directly from the TCRP Draft Constitution.

A Brief History of the TCRP

On January 5, 2011 the Office of the TCRP submitted a report detailing the project’s history and intent. The following information is drawn from that report.

The TCRP task force held its first meeting in January 2008 in Rio Rico, Ariz. At the meeting, they decided on two guiding principles: first, “that public discussion be generated…and used as building blocks for the development of a new constitutional framework,” and second, “that the constitutional process be Community member-driven and that transparency should be the standard throughout the process.”

The TCRP began by asking Community members if they thought the GRIC Constitution needed to be changed, and if so, how?

In its first round of surveys, the TCRP found that 93 percent of Community members surveyed answered yes, the Constitution should be changed, but their ideas of how it should be changed varied greatly.  Those surveys were collected from July to December 2008, and 244 Community members (including 31 from Los Angeles and San Francisco) participated.

The TCRP held a second round of surveys from January to April 2009 to narrow down peoples’ concerns on broad topics; fifty people submitted responses in the form of Opinion Sheets.

At this point the TCRP compiled its data from the surveys, meetings with tribal officials, and legal counsel, and developed a rough draft of a new constitution.

The TCRP presented the first Draft Constitution to members in the summer of 2009 and conducted a third survey in which approximately 139 members participated.

The third survey asked Community members what parts of the Draft Constitution they were satisfied with and what specific items they would adjust. A detailed analysis from August 4, 2009 (Attachment I, pages 302-388 of the TCRP report) shows how participants from each district, the Urban Members Association, and elders’ meetings responded. The TCRP task force used those surveys to fine-tune the Draft Constitution.

The TCRP developed the Final Draft Constitution on Sept. 1, 2009.

Results showed that 79 out of 93 (84.95%) people surveyed supported the Final Draft Constitution, whereas 14 people said they would not vote for it.

The final version of the Draft Constitution is presented in the TCRP report.

Over three years the TCRP conducted four rounds of surveys to gather Community member input. It should be noted that in each round of surveys, the TCRP reached out to members from each of the seven districts of the Community and Urban Members Association. Most of the surveys were also presented to the Youth Council, Elderly Concerns and GRIC members in Phoenix, Los Angeles and San Francisco.

From its work, the TCRP task force generated a number of proposed amendments to the Constitution, nearly all based on Community member requests.

Instead of holding one vote to approve all of the changes at once, the Community is holding a series of votes to address a handful of changes at a time; next month Community members are voting on seven of them.

As stated earlier, all of the proposed amendments on the May 3 special election ballot come directly from the TCRP Draft Constitution.

For example, in the Draft Constitution, in articles governing Membership and Powers of the Gila River Indian Community Council, specific clauses that gave the U.S. Secretary of the Interior authority over the Community’s actions have been removed.

Those same changes have been applied to the proposed amendments the Community is voting on in a few weeks for Articles III – Membership and XV – Powers of the Gila River Indian Community Council.

In an explainer section of the TCRP report, in regards to this specific change, it says (on page 35), “‘Secretary of the Interior’ review is removed. The Council retains the authority to promulgate laws effecting new members, who may be subject to further conditions in the enrollment process,” which is to say, there are other enrollment qualifications the Community can develop on its own, but those rules are for the Community to decide on and the Council to enact, and the Secretary of the Interior won’t be involved in whether or not someone can become an enrolled member.

Similarly, in Article XV – Powers of the Gila River Indian Council, Section 1 (b) and Section 2 define items subject to the review of the Secretary of the Interior and how the Community should handle that intervention; the proposed amendment removes the authority of the Secretary of the Interior over Community actions in those sections. There are no other substantial changes to this article.

As stated in the TCRP report (page 43), “The current constitution delineates which actions are subject to secretarial/bureau review by dividing Council responsibilities into reviewable (subsection (a)) and non-reviewable (subsection (b)) powers. However, in [this revision], the federal government’s review of Council actions is limited to those enactments identified by federal law.”

Based on suggestions from the TCRP, Article VI – Qualifications of Officers has been expanded to require elected officials to live in the district they represent or hope to represent for at least one year, they must be a registered voter and must have a high school diploma or GED.

The TCRP report says (on page 59), “The current constitution requires an elected official to be a Community member twenty-five (25) years or older and live on the Reservation for a year. However, the [proposed amendment] provides additional qualifications that officials must be registered to vote in the Community and meet the educational requirement. Initial public input identified the qualifications (or lack of qualifications) as a major concern. Specifically, Community members stated elected officials need some education requirement but there was no consensus on what type or level of education. The only other Indian constitution that contained an education requirement called for a high school diploma or GED. Under the [revised article], a Council representative must live in their respective district for one year (1) instead of sixty (60) days.”

It continues (also on page 59), “The crime-free provision increased from one (1) to five (5) years and now includes felonies.”

The proposed amendment version of Article VII – Appointed Officials and Committee Members is broken into three sections for (a) Treasurer, (b) (Council) Secretary, and (c) Appointed Officials and Members. Letter (c) reflects no changes. Terms for the Treasurer and Secretary have been increased to four years from three and one, respectively. Additional duties have been imposed on the Treasurer; the verbiage for this part of the amendment (Article VII, Sections 3-5) has been pulled word-for-word from the TCRP Draft Constitution.

The TCRP report explains (on page 63), “The Treasurer shall serve a four year term. The primary responsibility of the Treasurer is management of the Community assets, which may include a wide array of functions specified by future Council enactments. … The Treasurer is given specific authority to audit not only the government’s records but also entities such as corporations and other businesses; this authority is intended to be broad and refusal to cooperate with the Treasurer’s audit may be construed as a serious violation. This Article is not intended to be an exhaustive description of the Treasurer’s functions or responsibilities.”

There is only one addition to Article IX – Vacancies, which provides a procedure in the case of a vacancy in the offices of both the Governor and the Lieutenant Governor. Other sections of this article have simply been rearranged.

The amendment is based on a change included in the TCRP Draft Constitution, but in that case the vacancy would be temporarily occupied by the Treasurer (as detailed on page 69); that has been changed in the new proposed amendment.

The proposed amendments to Articles VIII – Tenure of Office and X – Elections go hand-in-hand to increase term limits from three years to four years for Council members, the Governor, Lieutenant Governor, Chief Judge and Associate Judges and to make sure elections are scheduled every four years to coincide with the new term limits. Sections 3 and 4 have been removed from Article VIII because the start dates for the Secretary and Treasurer are detailed in the proposed article VII.

This amendment was also taken directly from the TCRP Draft Constitution. The report says (on page 65), “Elected officials’ term of office is increased to four years,” and (on page 71), “The general election is held every four years to accommodate the increase in the term length.”

The special election on May 3 is a continuation of the goals outlined in the TCRP. Though that project has long-since ended, its objectives are still being carried out through the electoral process. Sovereignty belongs to the Community, but the power is in the hand of the voter, and in a Community as small as Gila River, every vote counts. 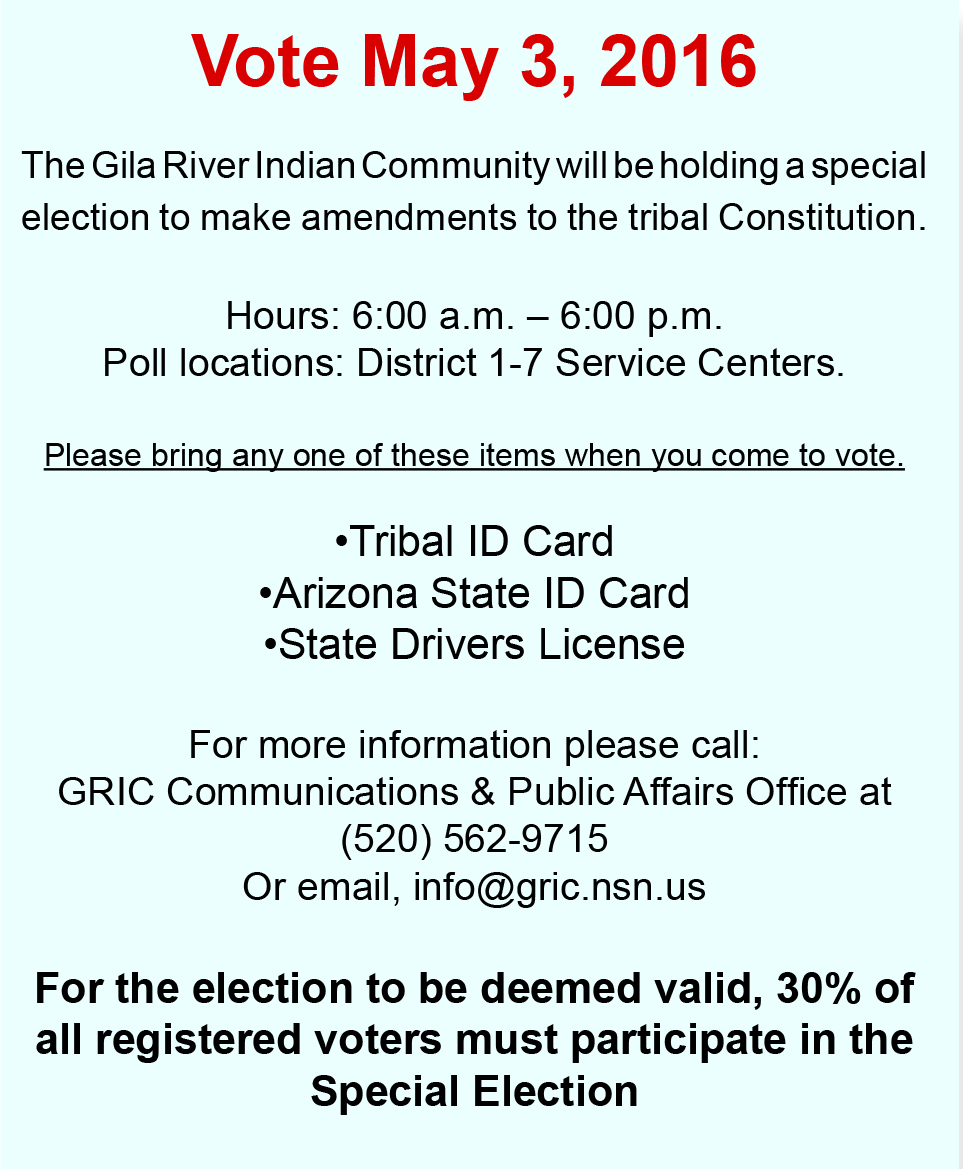