Joe “The Tomahawk” Tate has established himself as a top contender in the world of Mixed Martial Arts fighting, and everywhere he competes, he takes his community with him.

On Aug. 2, Tate presented his latest gold medal to Gov. Stephen Roe Lewis as a gesture of appreciation for the tribal leader’s support.

“I would not have been able to travel and compete,” said Tate, were it not for the financial assistance of the GRIC Executive Office. Tate has many sponsors and shows appreciation for all of them regularly, but he said the Community support is personal.

“I just felt it was necessary to honor him in that way,” he said. It always means more “to actually give something of value. … When I look at that medal, I remember training, getting a cracked rib [and] injured in grappling tournaments...but it all led down to that particular day to win that tournament.”

Tate, District 3, has won a number of medals in recent years in MMA competitions large and small. Last November, Tate competed in the Sport Jiu-Jitsu International Federation Worlds Tournament in Long Beach, Calif., where he took home the gold medal in his division of Men’s No-Gi Purple Belt Seniors, Super Heavy weight class. He also claimed two bronze medals: one in the Gi-on version of the same division and weight class, and the other in the Men’s No-Gi Purple Belt Seniors open weight class competition.

As one of the few Native American competitors in MMA, Tate does everything he can to represent his community well, and it begins with the Man in the Maze and GRIC seal he wears on his Jiu Jitsu uniform.

“People come up to me and ask me about these patches,” he said. “[They] ask me about where I come from and my heritage and culture and I…explain it to them.” He said he talks to people from all over the world, including Australia, China, the Philippines, Vietnam, about O’otham land, history and culture.

Tate says his culture is a core value of his, and something that he hopes to pass on to the younger generation. Currently, Tate works at the Head Start program in the Salt River Pima-Maricopa Indian Community.

“That’s one of the best jobs ever,” he said. “I talk with them and I show them my medals and I talk about the little engine that could – that ‘I think I can, I think I can’ approach.”

Meanwhile, he works hard to keep up with his training. He’s competed in 36 tournaments this year, he said, so he’s always looking forward to the next one. 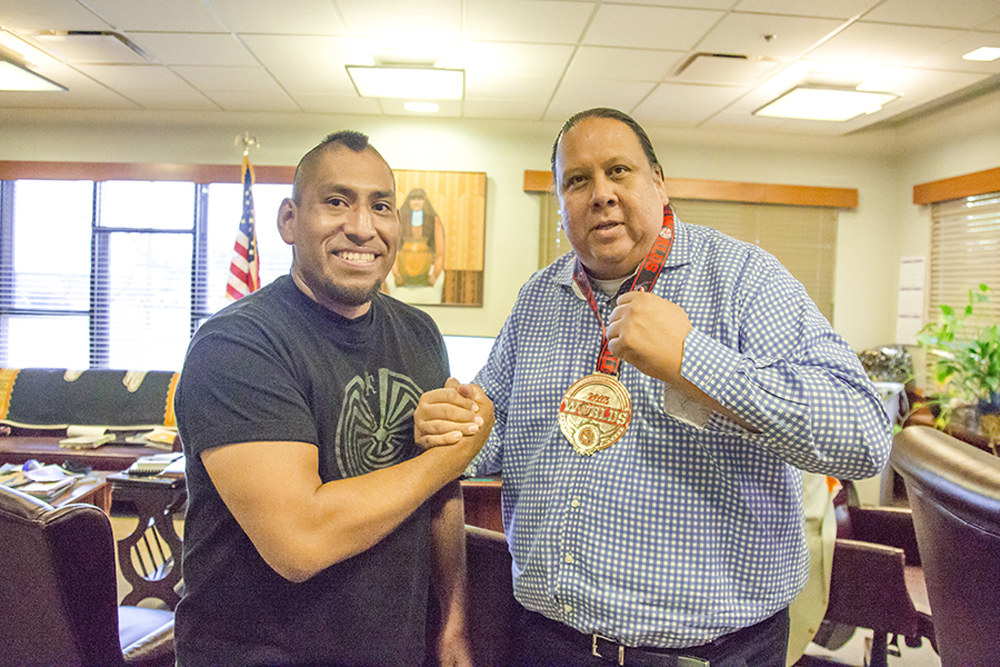