Many of us have now become familiar with the sight of white transit buses ferrying riders from stop to stop.

The Gila River Public Transit service sees the remainder of the year as a time to make even bigger strides.

Since beginning service in January and February of this year, the GRPT has observed a 30 percent increase in riders each month.

They know that sooner or later their routes will need to expand to meet the growing numbers of riders.

GRICDOT Acting Transportation Planner Gregory McDowell said, “At the end of this year we are going to bring in a consulting firm. They are going to evaluate our current services and the need for service in other areas of the Community.”

McDowell said that GRICDOT has applied for additional funding under what is called the Federal Transit Administration Section 5311 program to continue operation for two years.

If awarded more funding, in the second year of the grant (Fiscal Year 2018), GRPT would like to purchase an additional two buses to increase their service and to keep one on standby if one breaks down and needs repair.

Under the FTA 5311 funds, the GRPT is required to form a Transportation Advisory Committee.

The TAC, which will consist of GRIC stakeholders, will provide recommendations on service quality and effectiveness and will report to the Arizona Department of Transportation.

According to McDowell, they hired a fourth driver to get up to full staff and are expected to hire a permanent transit manager to handle the day-to-day operations.

McDowell understands that sooner or later their transit service will need to expand service hours and routes as the year comes to a close.

He said currently, “District 3 has been our most populous route ahead of Districts 6 and 7. ... More and more people are relying on the bus and it’s a good thing people are utilizing [this] service.”

At the moment, GRPT will maintain the amount of bus stops, but has plans to expand its operating time by one extra hour, which means it will begin service at 7:00 am and end at 6:00 pm to accommodate people traveling to work.

Towards the end of this month GRPT will conduct a ridership survey to collect comments and feedback.

The surveys will be available on each of the buses and will have a drop box for people to submit their completed form.

McDowell said they would like to receive as many responses as possible from the people that are actually using the service to learn about what they can improve on.

As for the buses themselves, they will get a lot more recognizable when they receive a new design that was created by Community artist Paul Molina of District 7.

GRPT held a design contest with four concept designs people could vote on, but in the end, Molina’s entry was voted as the most favored design.

The design, with its inspirations from traditional pottery and basket weaving will be printed on vinyl and cover the entire side of the bus.

The future looks bright for GRPT and with a new look it will surely attract more riders and possibly see more stops and routes in the future. 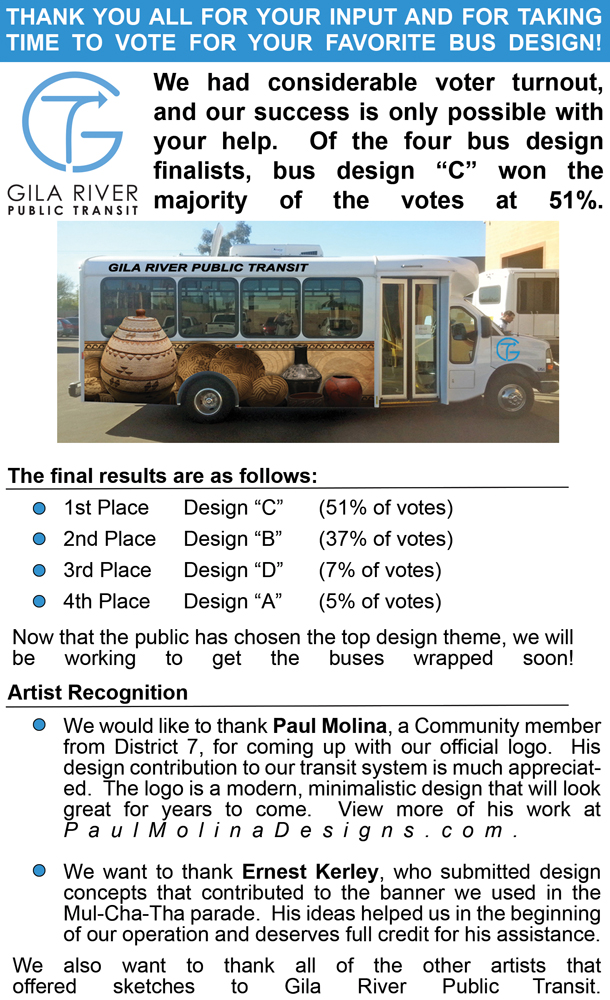