Jolyce Armenta’s journey from Komatke to Oregon and back again

Busy as a bee. That’s how 17-year-old Jolyce Armenta could be described in a nutshell.

The Chemawa Indian School senior has been nothing but busy over the past several years, participating in every school club she can find, competing in the Miss Chemawa pageant and earning the title of Miss Chemawa 2016-2017, and most recently, being accepted into Grand Canyon University. Armenta has been on a mission to further her education and live a rich and fulfilling life.

How does a teenager, who is just starting out in life, know to navigate the difficulties of life? That knowledge and discipline comes from the teachings of her parents Joseph and Anna Armenta.

Joseph said that he wants his daughter to have her own mind and to think of what she wants for herself, to be an independent woman.

“I want to push her…to keep that goal [of education] and bring that back to our tribe and pass it on,” he said. “When she has her own children, she can do the same for them. That’s what I want because I wish I would have done that when I was younger,” Armenta said.

And that’s what Jolyce has been busy doing. From the very beginning of her education in the classrooms of Laveen Elementary School District, she has participated in extracurricular and taken her education seriously.

Which is why, when it came to choosing a high school, enrolling in a boarding school was a requirement.

“I’ve always wanted to go to a boarding school because my sister and my brother, my dad, they all went to Sherman in California,” she said. “I always thought it would be fun to go out of state.”

It wasn’t just a family tradition and travel that attracted Jolyce to Chemawa Indian School. It was sage advice from her father that ended up sealing the deal of picking a boarding school for her secondary education.

Joseph said that he knew that ditching, alcohol, and drug use were prevalent in the public school system and that he wanted his daughter to avoid those pitfalls and focus on her education and self-development.

Before she knew it, it was time for her to leave her desert home of Komatke and travel to the green landscapes of Salem, Ore. “It was scary at first. I couldn’t [just] go home and relax, it was just different,” she said. “There were times [I missed home] but I was able to call home and ask how everyone was doing and check up on them.”

While Jolyce’s nerves were in a bundle, her father’s own anxieties were bubbling to the surface.

“I know how she is, she is the daddy’s girl out of all my other kids,” Joseph said. “I was just afraid you know, you have to take care of yourself, you have to make sure you have all these things that you need like shampoo,” he said. After a short pause, he added “I was kind of afraid of boys, how they are, that was the main thing I was scared of.”

Over the past three years Jolyce made herself at home on the Chemawa Indian School campus, participating in a large variety of school clubs. A few of the clubs she joined were the quilting club, American Indian Science and Engineering club, Pow Wow, volleyball, boxing, softball, and hiking clubs. She was also a member of the Northwest Youth Corps, a non-profit job training education and outdoor school program that teaches youth through hands-on experience.

While this may seem like an overwhelming number of activities to take part in, for Jolyce it is better to be busy than bored.

“If you don’t get yourself involved in school then it is boring,” she said, adding that you have to make your own fun.

“My freshman year… my roommates, who were all seniors, they were telling me to have fun, but to not waste [my] time doing nothing or trying to get in with the bad crowd. The more fun you have here, the more memories you make and the four years do pass. I thought it would be a long time but now that I look at it, it really did fly by more quickly than I thought,” she said.

This past November Jolyce took part in the school’s annual Miss Chemawa pageant for the second time, the first of which she was unable to win the crown. However, this year, hard work, determination, and a bit of luck were with her as was able to win the Miss Chemawa 2016-2017 title.

Jolyce’s streak of success hasn’t ended yet. With her acceptance into Grand Canyon University last October, where she will work towards becoming a pediatrician, and her upcoming May 12 graduation from Chemawa Indian School, it seems that for Jolyce, the sky’s the limit.

While Jolyce is motivated to continue her education and experience as much as life has to offer, she is humble and understands that she could not have accomplished these goals on her own.

“When I do think about it, I wouldn’t have anything if it weren’t for my dad and my step-mom,” Jolyce said. 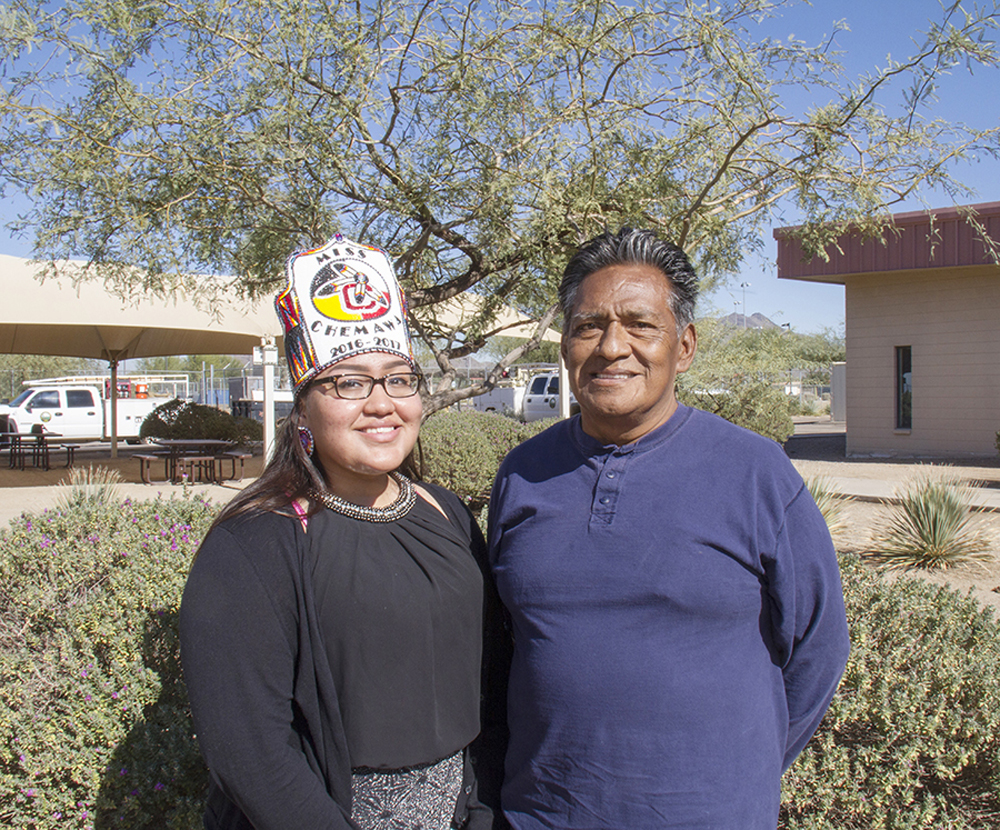