For many Community members who own a dog, there is a closeness that is similar to having another member of the family.

Seven years ago, Arlene Holder, of District 4, and her husband Calvin Holder received a dog they named Alice.

For the Holders, Alice was unique because she wasn’t the kind of breed you would normally see.

In fact Alice is a Shiba Inu, which is native to Japan and has been highly regarded as a dependable breed of canine that was used for hunting and with their keen senses are excellent watchdogs.

Alice’s story is about the special relationship that formed between her and the people who took her in.

Alice caught their attention when she came to their previous home while they were in the process of moving.

“It wasn’t the kind of thing you would normally expect, but there was something unique about her,” Holder said.

For most people, a stray showing up to a home may not present any significance, but for the Holders, they knew this was something more.

“It is a blessing, because we decided that we should adopt a dog if we weren’t going to be able to have children,” she said.

In looking on the bright side she said, “Calvin and I had been praying for a child, but God has a sense of humor. He sent Alice instead.”

When Alice came to be with her new family the Holders learned she was15 years old, the maximum lifespan of a Shiba Inu.

One of the standout traits of a Shiba Inu is the loyalty toward their owners, which Alice would demonstrate time and time and again whenever they were on vacation, often sitting by the door for their return.

During times of mourning, Alice found a way to bring cheer into their lives especially after the passing of her father and mother-in law

“It just shows how much she has been a part of our lives,” she said. “At times she is a motivator for my husband and I.”

Her advice for people who would like to get a dog is to look for one that fits your family.

“What are some of the traits you think you will be able to handle? And think about the level of care involved,” she said. “We were lucky to get a dog that fit right into our family.”

The important message for people to know is that dogs can make a world of difference in coping with loss, grief and depression.

Unfortunately in December 2015, a passing car struck Alice and she had to be put down.

Before Alice’s passing they got a Maltese named Mariah to join their little family to keep Alice motivated in her old age and was able to keep her occupied during the day.

When Alice had her accident just days before Christmas, it was a hard situation, but with the support of her family and friends they were able to bring some cheer into their lives.

When they took Alice to the Animal Control shelter in District 5, she said the staff members Adrienne Clendon and Hector Rodriguez were compassionate about the situation and that she owes a lot of gratitude for their care of Alice. 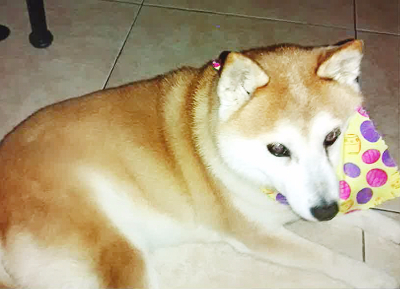