Zumba: Have fun, get fit

Zumba is the most fun you can have working out at the gym, hands down…now hands up, now hands down, and repeat.

Frances James has been touring the Gila River Indian Community for the past year, motivating her fellow Community members and leading them, step-by-step, to their fitness goals.

“When I started in District 2…a lot of people didn’t know what Zumba was,” she said. Now, Zumba is one of the most popular exercise classes on the reservation.

Zumba is an aerobic exercise program that feels more like an organized dance party than a workout class. It features fast-paced interval workouts set to the rhythm of Latin American-based beats.

“We do a lot of dance routines like...meringue, raggaeton, cumbia, and belly dance,” said James, who travels from district to district every week leading youth, elders, men and women alike in Zumba.

“I have all ages that come to the class…I look at it as a family thing.” This past year, she said, “we became all one big family.”

Last Friday, on Feb. 12, James and her Zumba family celebrated her one-year anniversary of teaching Zumba in Gila River with a two-hour “Zumbathon.”

James is one of several Zumba instructors in the Community. Tyler Riggs leads Zumba classes in District 5.

“What I like about Zumba is, not only am I getting a workout for myself, but I’m helping others as well,” he said.

Riggs, 25, from D5, is a licensed Zumba instructor, who has been leading classes in Vah Ki since last summer. His classes are every Tuesday and Wednesday at 6 p.m. and he invites everyone to attend his classes regardless of their age or where they live. “People ask, ‘Can guys come too? Is it for women only?’ I say, ‘No, everybody can come.’”

Riggs first learned about Zumba by taking classes in D5 over a year ago. Now, as the instructor, he pushes the dance class to its limit and likes to keep a quick tempo.

“It’s not just your typical step workout; it’s fun,” Riggs said. “You get to move around more, there’s more music varieties out there so you can change it up when you want to.”

It’s fun, but it’s no walk in the park. Participants can burn anywhere from 500 to 1,000 calories in a one-hour session.

Danielle Moffet, a regular at the D5 classes, has been doing Zumba in GRIC for three years.

“In the beginning I could not get a step,” she said. “It was hard.”

Moffet lost 70 pounds in the past five years and attributes much of that to her Zumba workout routine. “And I like the hours, I can come straight here after work.”

For more information on upcoming Zumba classes near you, call your local service center or search the upcoming event flyers on mygilariver.com. 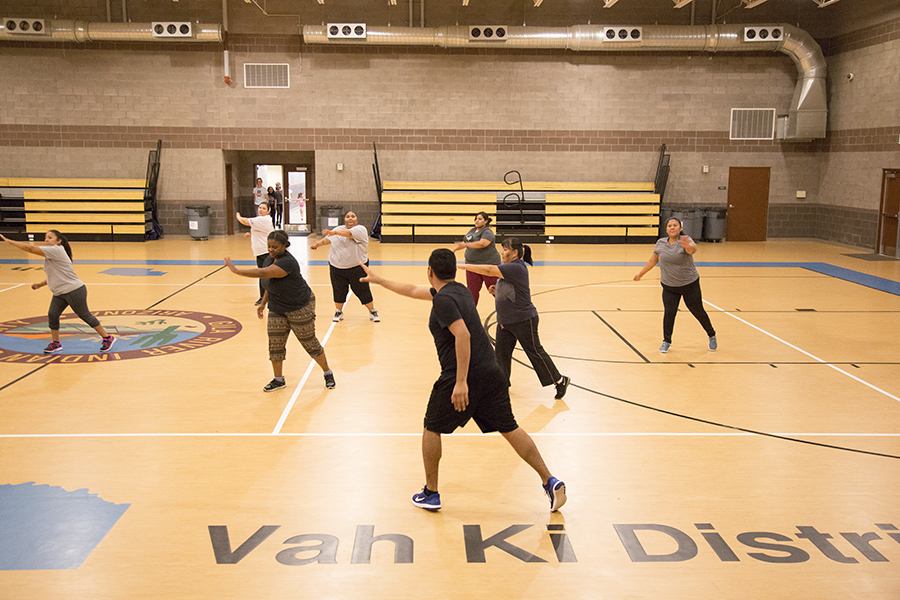