After 15 years as an officer with the Gila River Police Department, leaving the force wasn’t easy.

“I really enjoyed what I was doing,” said Marlin Dixon, the newly elected District 5 Council Representative, who was sworn in on Jan. 6.

Dixon has been a positive reflection of the character of his community for years, but now that he’s officially on the Community Council, he looks forward to the challenge of representing his people full-time.

As a police Ranger he became more assertive and more confident. He learned how to deal with difficult people and difficult situations. Most of all he learned to listen.

“The main thing is learning to listen to the people,” he said. “Listen...to better help them or find ways to help them.”

Dixon enjoys helping others, but he didn’t seek out the title of Councilman for himself. He was nominated for the position by an elder who had observed his development. Dixon was surprised by the nomination and said it made him realize how much people are paying attention to the work he does in the Community.

Dixon and his wife have three children of their own, and are raising two more that they call son and daughter.

“My son is 17, my daughter is 16 and my daughter who’s in 8th grade is my youngest biological.”

They have also been raising a now 5-year-old boy, a cousin’s son, since he was 7 months old, and recently inherited temporary guardianship of another relative’s  2-year-old girl. To top it off, their older children always have friends coming over after school and on weekends. “We always have a house full of kids,” he said, smiling.

That house is a few miles west of St. Peter Indian Mission School, where his children attended middle school and where, for several years, he was an active member of the Parent Board and School Board.

Dixon advocates strongly for education. As a Council member he hopes to contribute to the advancement of education in the Community.

“I try to encourage the kids that come to the house. ‘Do more,’ I say. ‘There’s another world out there so be prepared for it. Learn.” He wants people to know there are a lot of opportunities to further one’s self.

After high school, Dixon attended vocational school and became a mechanic. He worked as one for a while, but returned to Gila River to help his family in a tough time. He then got a job as a security guard at Sacaton Middle School, where he worked for 14 years before becoming an officer with the GRPD.

Now, at the age of 50, Dixon is trading in his boots, badge and Ranger’s Raptor truck for a desk job.

Many of the elders in District 5 will remember Marlin’s father, the late Rodney Dixon, who served on the Council for nearly 30 years, throughout most of Marlin’s childhood and teenage years.

The younger Dixon speaks proudly of his father’s time on Council: “They’re the ones that brought in the casino, telecommunications, and the police department.”

He said, “I’m not trying to fill my dad’s shoes…I couldn’t do that.” But he approaches his new role with humility and an open mind. 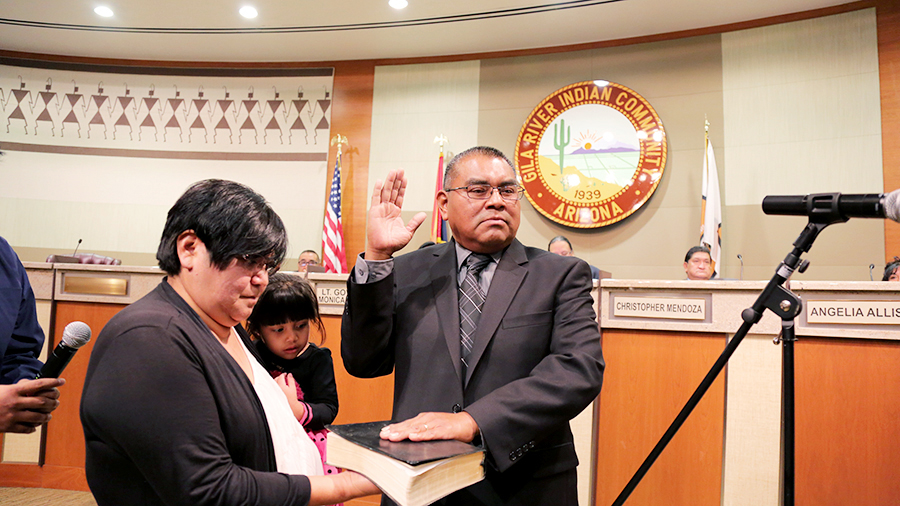