On a patch of olive tree farmland just west of the I-10, a crew of seven workers hacks at an endless sea of weeds, slowly but effectively beating back the unwanted plants in an effort to nurture the 217,000 olive tree saplings growing across 355 acres on Gila River Farms.

As to why the farm will be growing so many olive trees, Tiffany Horne, GRF General Manager, said that from the very beginning of the farm’s investment into the olive trees, the intention for the new crop was to produce olive oil.

“The price of olive oil has consistently gone up over the last few years and we have the ability to either sell it in bulk or we can bottle it and sell it under the Gila River Farms label,” said Horne.

Now that the word has been out for a few years on how many of the overseas bottles of olive oil, sitting on local supermarket shelves may be fake, local olive farms and olive presses have experienced growth with new groves popping up all over the United States.

Earlier this year, Forbes reported that 80 percent of the Italian olive oil available on the market is in fact not olive oil at all. It was found that many Italian olive oils were either low-quality, of unknown origin, or at worst, an outright fake made with vegetable oil mixed with fragrance and coloring.

While this is terrible news for shoppers who’ve been duped into buying possibly fake bottles of olive oil, this is great news for American olive oil producers, who, according to the Wall Street Journal are making fresher and more flavorful olive oils that clearly state a date and location of harvest on their bottles.

GRF is looking to join the ranks of those local olive oil producers and begin serving up their own delicious Gila River Farms label brand.

It’s all about the olive oil

The olive saplings, which were all hand planted in October 2015, are the end result of years of research conducted by GRF. GRF, working in conjunction with Agromillora Nursery located in Sacramento, Calif., decided on three varieties of olive trees, the Koroneiki, Arbequina, and Arbosana.

“Those three produce the best olives for the oil itself. You can blend those three different varieties of olives to make different tasting oil,” Horne said.

GRF also chose those olive tree types because they are super high-density trees, meaning, they are planted on a trellis system and can be harvested by machine, requiring less labor from workers and produce more consistent crop yields.

However, while GRF has planted close to a quarter of a million olive trees in its fields and looks to see its first yield sometime in 2018, there is still the question of an olive press.

“We really want to press the olives here ourselves,” said Horne. “These trees are capable of producing up to five tons per acre. So, for each tree, that equates to 1.2 to 1.3 gallons per tree, per year. We would like to market it under the Gila River Farms or Gila River Indian Community name. Have it all, from start to finish, an end product that the Community is producing here,” said Horne.

With the know-how and research into growing and maintaining the olive trees done, the plan seems like a slam-dunk, except for one very large hurdle—the $700,000 price tag for a standard olive press.

While GRF doesn’t currently have the funds to purchase an olive press, they are hoping to build one over the next 18 months.

Horne emphasized that even if the farm is unable to build an olive press before their olive trees begin to produce fruit, the farm will be able to sell their olives as a commodity or have the olives pressed at another location.

“There is a huge demand in California for olive oil,” said Horne. “To the point that they would pay us for the freight, for us to ship the olives there in containers.”

“There are lots of options,” added Horne, “Buying the olives as a commodity is in demand, so, it’s not just the oil that is profitable but also the olives themselves.”

Olive trees and the desert climate

With olive oil becoming a popular local crop in the U.S. and GRF having purchased and planted over 200,000 olive trees plus looking to build their own olive press, the future of the new crop looks good. But one big question remains. Will the olive trees thrive in the Southern Arizona climate?

“They do,” said Horne. “We did a lot of research, soil sampling, water sampling, [and] testing to make sure that the micronutrients in the soil was suitable for growing in this climate. Typically, these olives are grown in a Mediterranean type of environment…[and] grown a lot in the Middle East, [which is] very hot. This climate here is comparable to that and it makes sense for us,” she said.

Even though Arizona is not suffering the same debilitating drought conditions that California is experiencing, water is still a precious commodity and luckily for GRF olive trees don’t require much water.

“The trees are suitable for desert climates,” said Horne. “They actually don’t need a lot of water. Olive trees in general are very hardy trees.”

But while the trees are suited for the desert climate, and are relatively pest resistant, there is one problem that the young saplings face. Weeds.

“One of our biggest issues are weeds in the field. Just maintaining the weeds is tough. We have a crew of people out here who are hand chopping the weeds,” said Horne.

A crew of seven people goes out six days a week just to maintain weed growth around the young olive trees, she said.

Those weeds can smother the trees and keep their roots from taking, which is why the farm is looking into installing a drip irrigation system instead of their current arrangement of flooding.

“[Drip irrigation] is really the optimal way to water them,” said Horne. Currently [we are] flooding. The trees grow fine with flooding, but then again we have lots of weeds. We are watering weeds as well as the trees,” she said.

Though the weeds are a nuisance for the seven-person work crew that battles them on a daily basis, their efforts are not in vain. The olive trees and their roots have been inspected by an expert and deemed to be in good health and thriving at Gila River Farms.

By 2018 the olive trees will begin producing olives and because the trees are expected to produce for the next thirty years, the Gila River Indian Community will have plenty of time to taste the fruits of its labor. 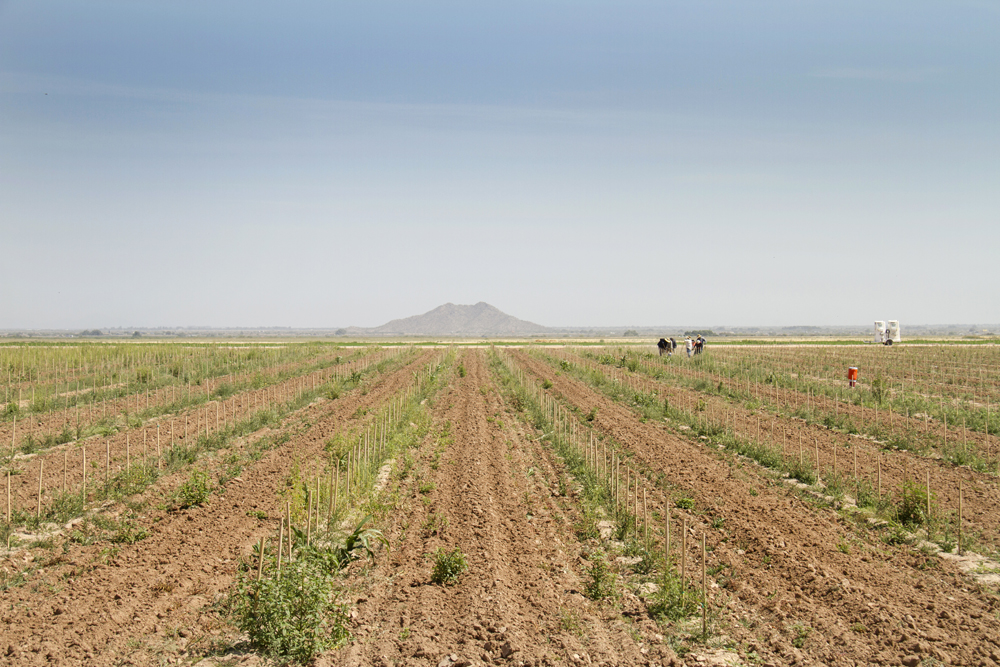 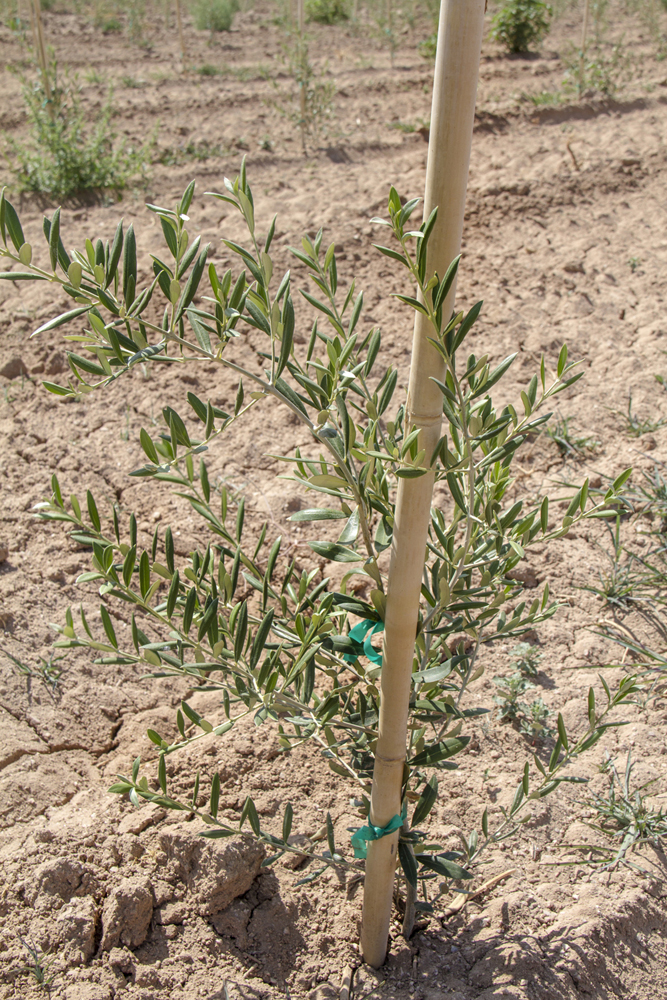 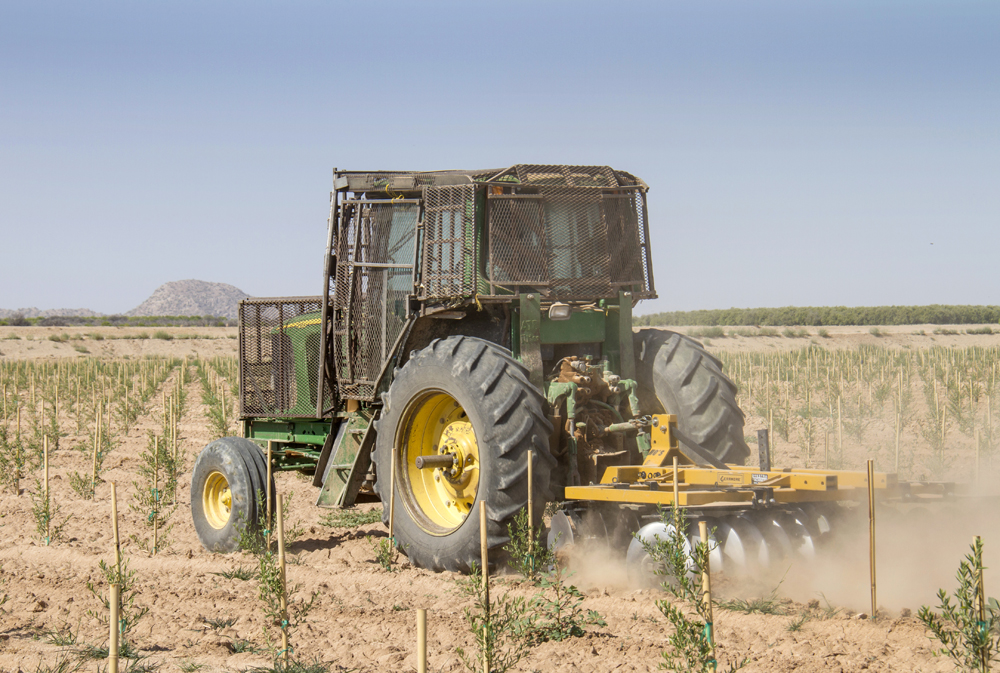 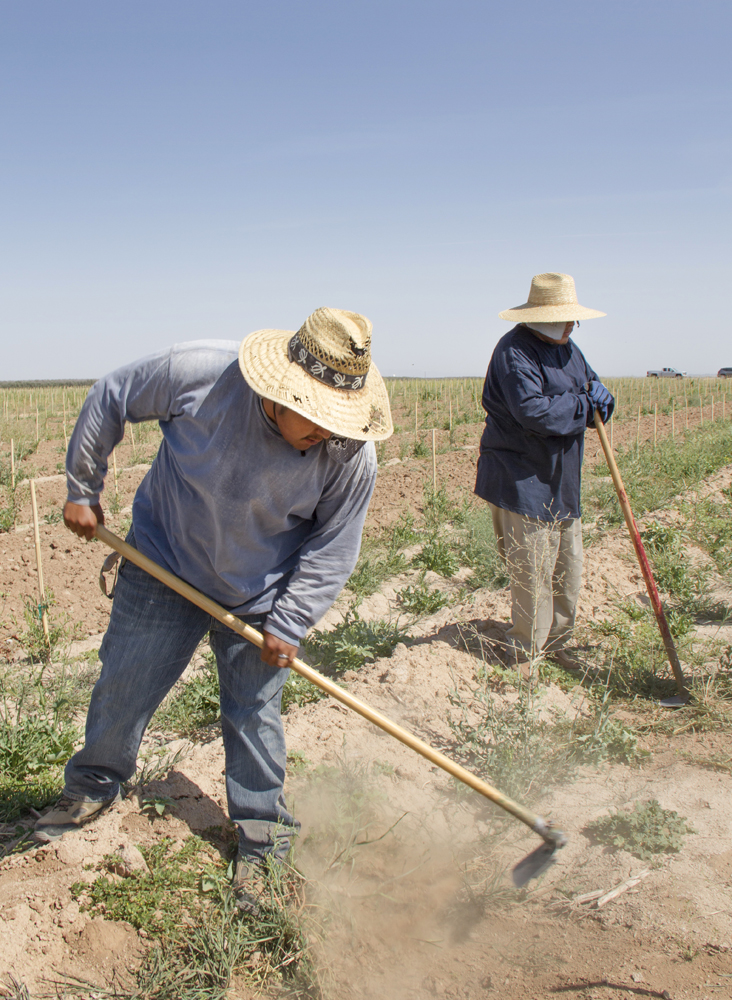 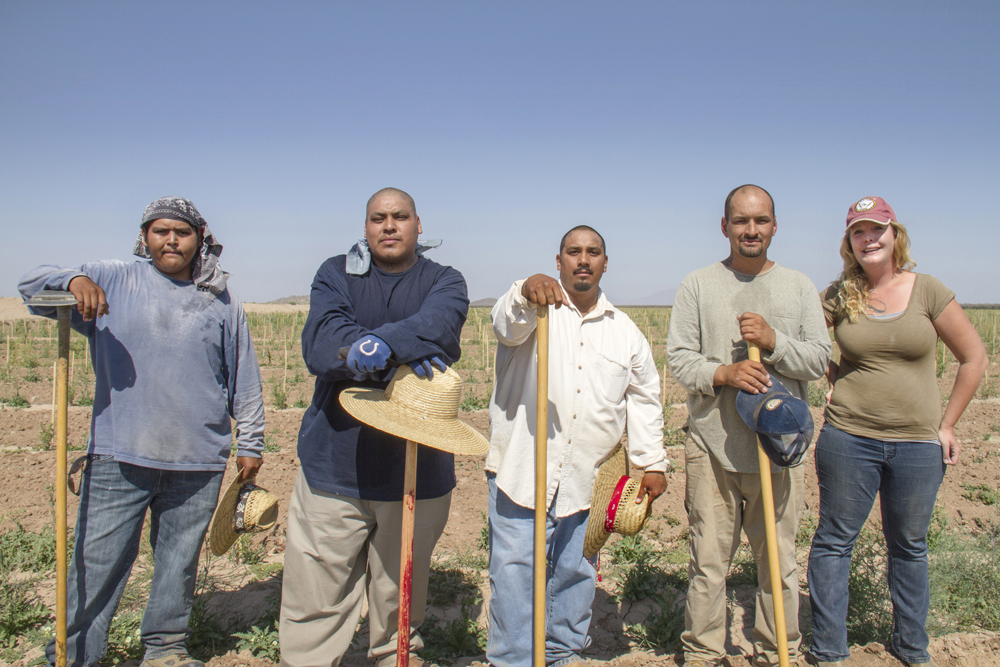 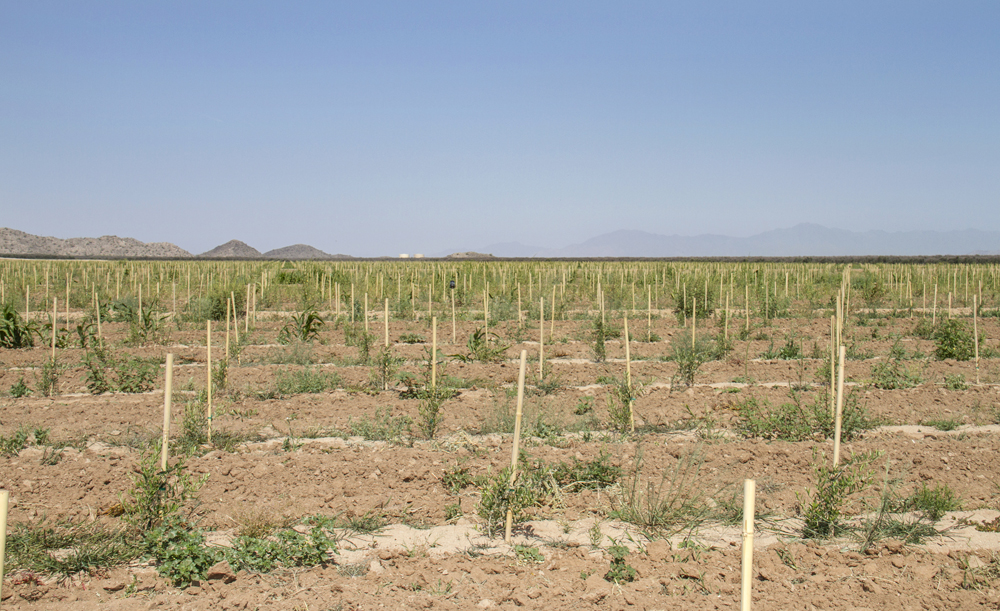 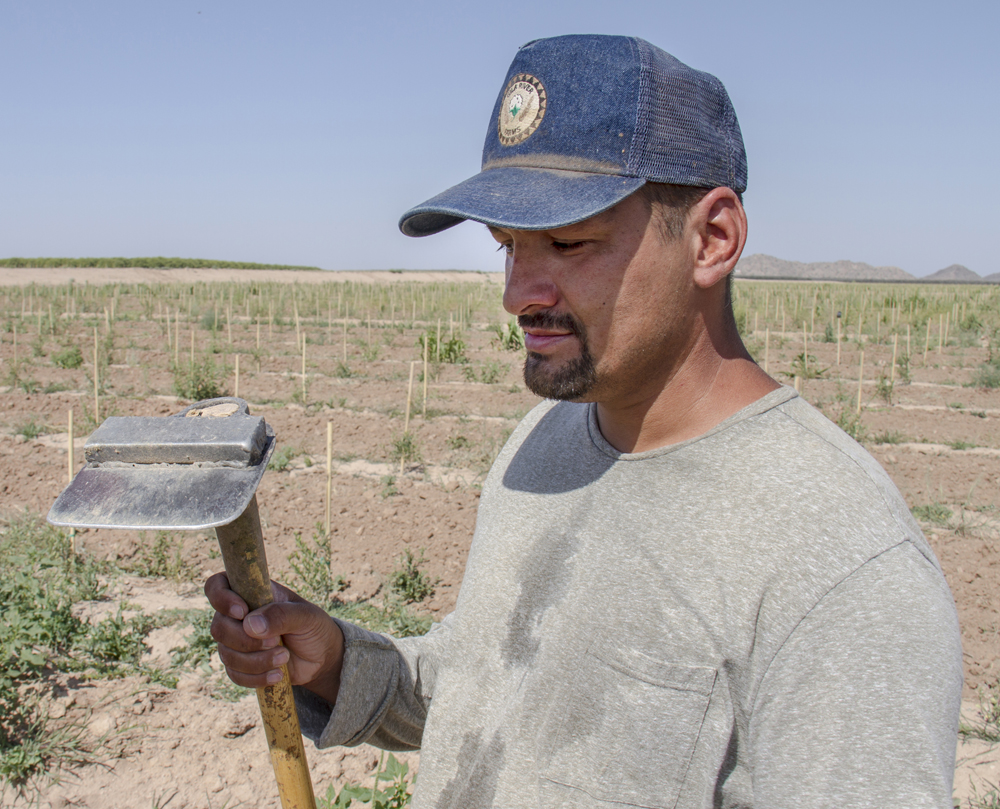