O’otham New Year is defined by the changing of the seasons. It recognizes the summer solstice and invites the monsoon rains to nourish the arid desert land.

The Community held an O’otham New Year Gathering with an all-night chuth at the Sacaton Fairgrounds from Saturday evening, June 18 to sunrise on Sunday, June 19. A chuth is a type of social dance that begins in the evening and ends at sunrise.

The New Year celebration is a representation of the changing of the season; it doesn’t have to be held exactly on the solstice (which, this year, was on June 20). During this time of the year, many O’otham also harvest baithaj from the ha:shañ and “sing down the rain” with prayers for a good monsoon and healthy harvest.

The evening began with a thoka tournament held in the orange light of the lowering sun. Two teams from Gila River and one from the Tohono O’odham Nation faced off in fierce, friendly competition. The women showed their toughness, battling each other for the ola (the “puck”) and enduring the 117-degree heat.

As the sun slid behind the Estrella Mountains, the gourds began to rattle in time.

Hundreds attended the O’otham New Year Gathering, a sort of revival of the type of celebration that would have been held long ago. For the past three years, Pamela Thompson, GRIC Community Manager, has organized the Celebration at the fairgrounds’ Cultural Circle.

“It’s really exciting, and it’s grown, and it really instills pride in you as an O’otham, and if you haven’t attended before, I invite you [next year] because…it’s an exciting place to be.”

A group of 60-plus basket dancers from all across the Community opened the night with a series of dances such as The Swing and “What Kind of Flower?” Later, a group from the Salt River Pima-Maricopa Indian Community also participated with a number of traditional Pee Posh songs and dances.

This year, the Communications & Public Affairs Office and the Office of the Community Manager teamed up to help Thompson organize and fund the event. The offices paid for meals for guests as well as give-away baskets and gifts for the singers.

Barnaby Lewis is a regular at the O’otham New Year Gathering. He stays up all night, singing more than 100 unique songs with different groups.

“There was a variety of different bird series songs that we sang, mostly because we wanted the people to hear the tremendous variety of melodies and tunes,” he said. “There are blackbird songs, swallow songs, oriole songs, macaw songs…all of these songs have stories in them, but [also] they’re all social dance songs.”

In a distant corner of the fairgrounds a group of men, led by Antonio Davis, aka Gohk Hapoth, and his brother Joe Davis, learned to play an old men’s game called “gins” (pronounced with a hard “g” as in “gains”).

The game is played on a large board of sorts, made out of holes dug into the earth and participants positioned in the cardinal directions. Players toss sticks into the air and move tokens around the board like Hasbro’s “Sorry” according to markings on the sticks.

“You [begin] from the West, and then you go counter-clockwise,” Davis instructed. “Every community’s rules are different, [but] for our rules, all the sticks must land in the square, or what they call the realm, [and] they can’t land on each other or on their sides.”

Bets (usually possessions, not money) are placed in the middle before gameplay and the winner takes the pot.

Like the modern New Year celebrated on January 1, this is primarily a social event, albeit with more cultural weight and, for some, an element of spiritual rejuvenation. The focal point of the night is spending time with family and friends.

Laughter was abundant, and everybody danced at one point or another. A few dozen stayed the whole night and didn’t sleep a wink.

Thanks to the extra funding from the Community, guests were well fed with catering from the Sunna family. Organizers provided dinner, a midnight snack of menudo and yeast rolls, and burritos and fruit as part of a complete breakfast.

As the first light of dawn began to creep into the sky, the veil of night lifted, details revealed themselves, and the tempo of the drum and gourds quickened. Gov. Stephen Roe Lewis led the dances for the final half-hour and the singers ended the night with the Oriole Bird Song.

Around 5:20 a.m. the sun crested over the San Tan mountain range. The circle of dancers wrapped in upon itself to thank the singers in a line of handshakes and weary smiles. And then they dispersed, ready to start the New Year. 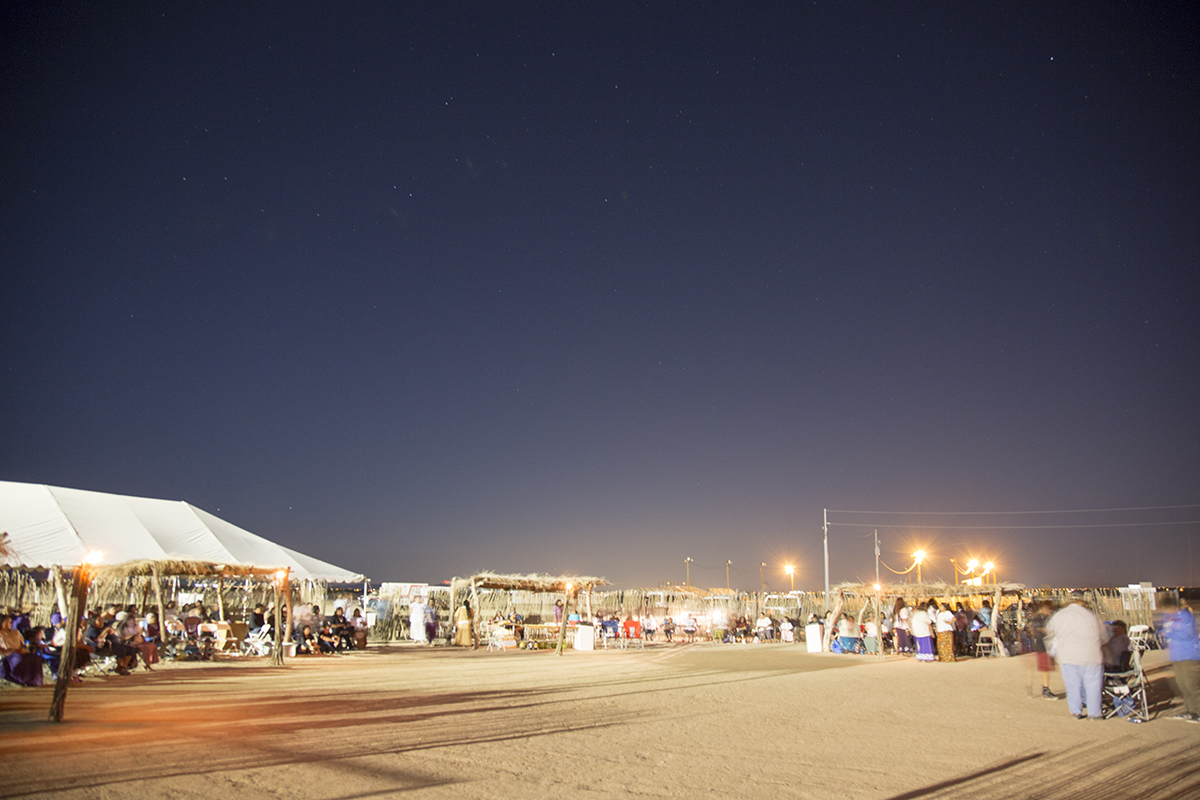 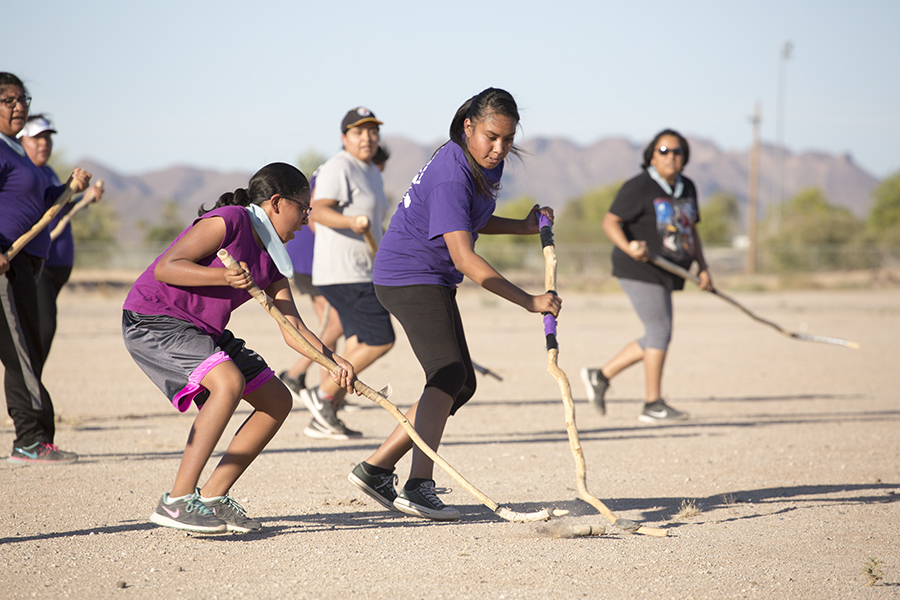 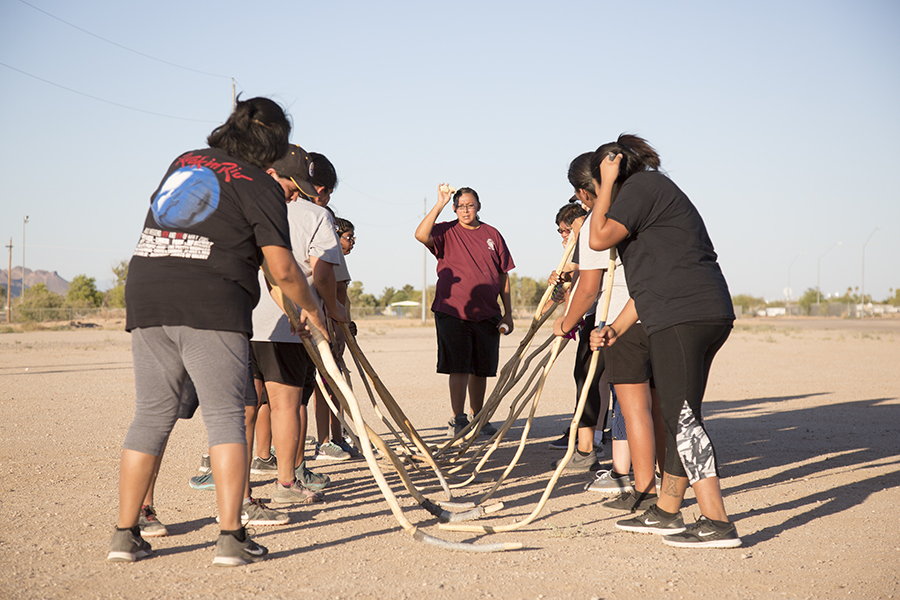 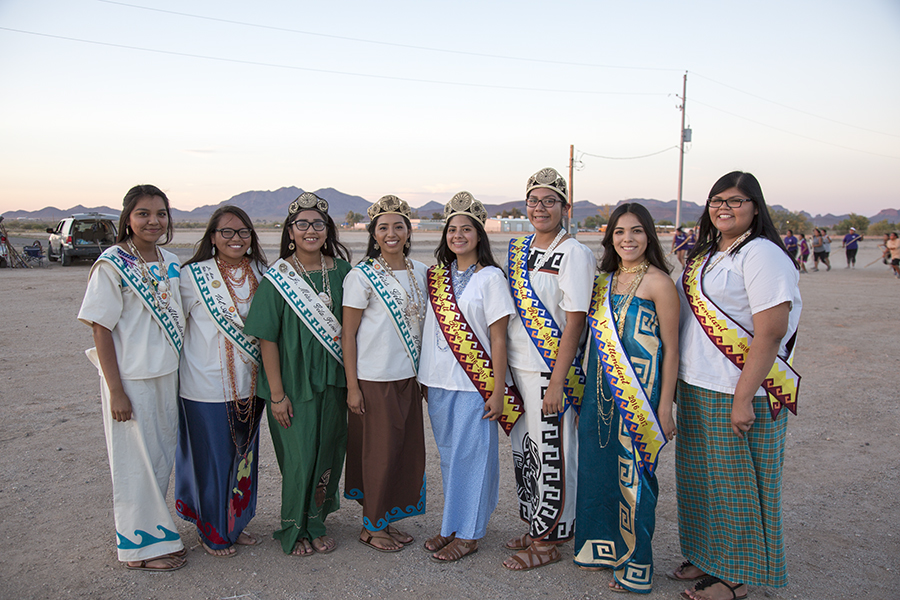 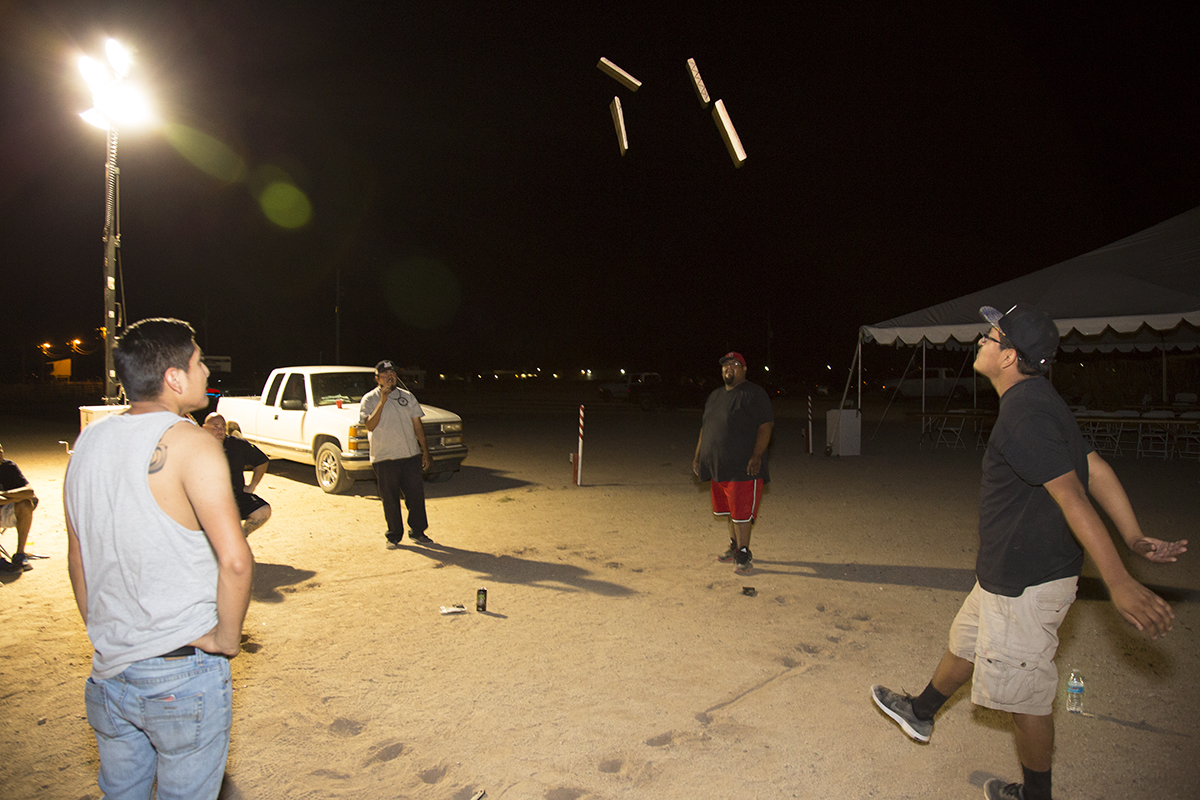 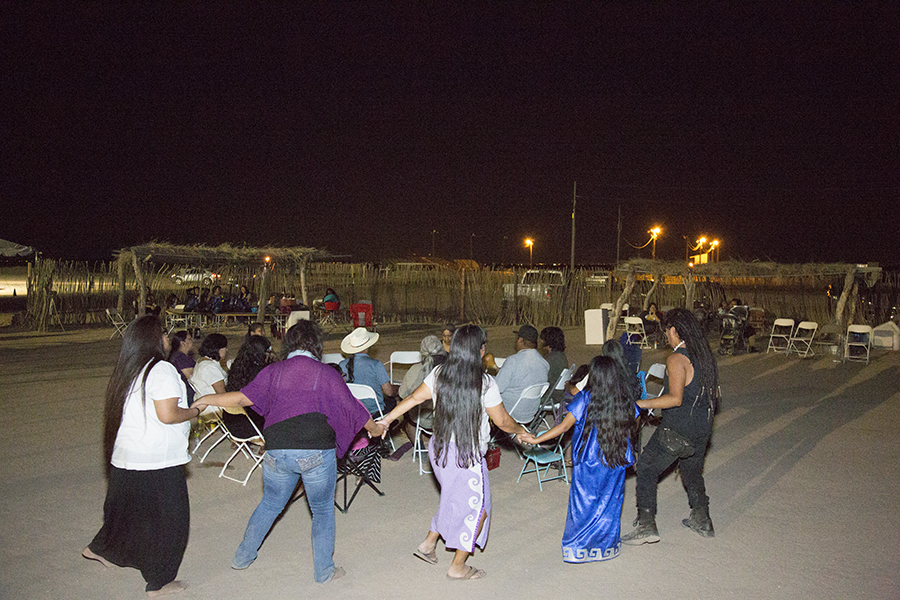 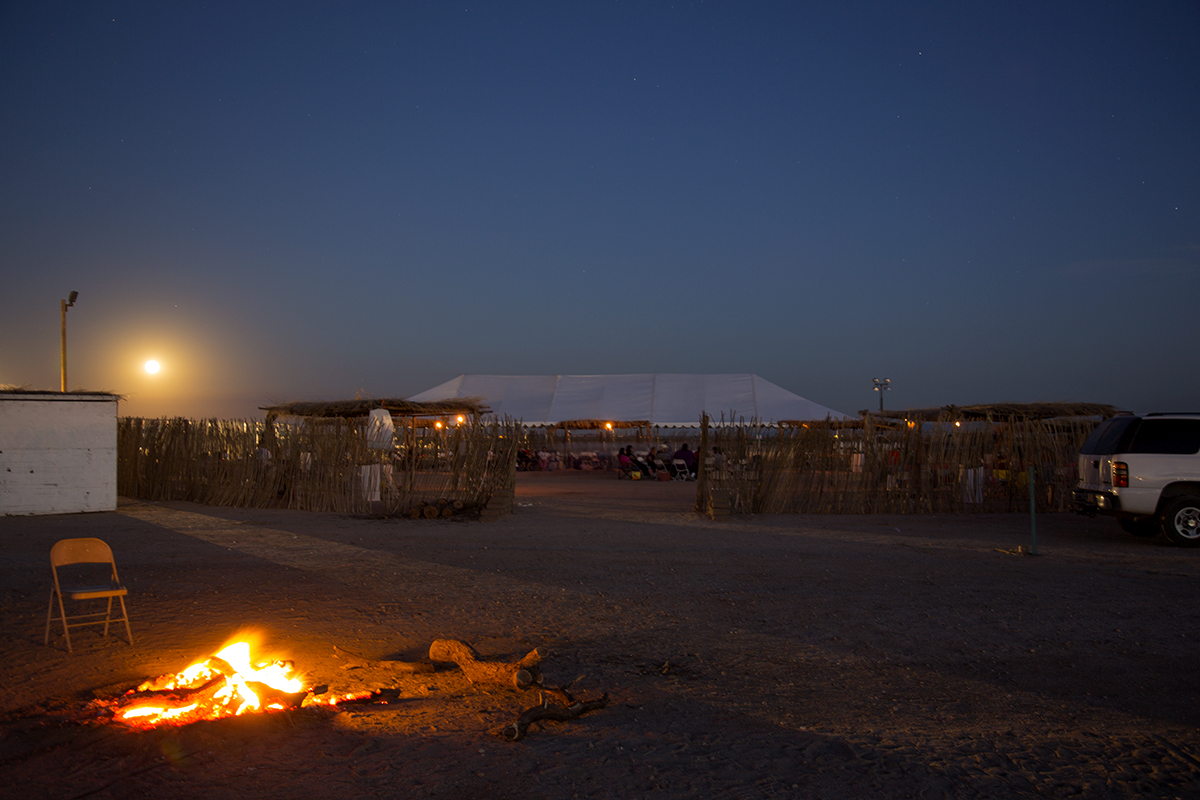 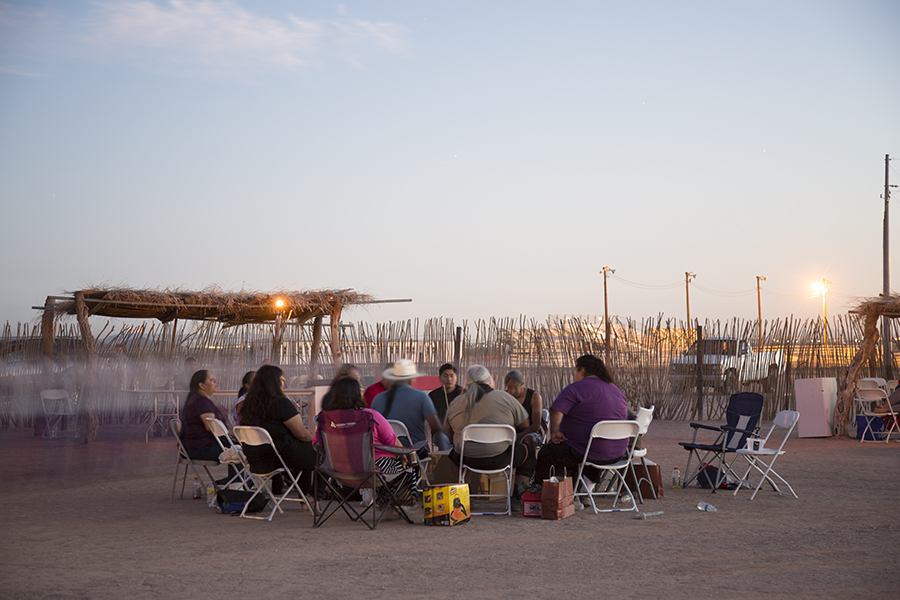