A crowd gathered at St. Francis of Assisi Mission in Ak-Chin to attend the Rite of Ordination for the Franciscan Friars of the Holy Spirit, who were in the final phase of becoming priests of the Diocese of Phoenix.

On July 3, the seven friars, who live in the Saint the John the Baptist Mission in District 6, dressed in clerical clothing followed Catholic dignitaries down the aisle to be ordained.

After being called forward and presented to the church, the candidates were questioned and promised to perform the duties of the priesthood and to respect and obey his ordinary (bishop or religious superior).

The essential part of the rite is when the bishop silently lays his hands upon each candidate, as well as all priests present, invoking the power of the Holy Spirit upon those being ordained.

The Franciscan Friars of the Holy Spirit received new names: Brother Athanasius, Father Antony, Father Benedict Mary, Father Joseph Francis, Father Alcuin, Brother Peter Teresa, and Father Ignatius. They were given grey robes, a cord and rosary to be worn around the waist by Bishop Thomas Olmstead of the Diocese of Phoenix.

“It was an honor to be a part of the celebration,” Councilman Villareal said. “In witnessing the ceremony, it was my first and I was blessed to see them receive their habit and become a part of the Indian churches of Arizona.”

Before the service, the friars told a story of a vision that was received at prayer meetings of different Christian faiths in 1987. The vision occurred as they were in prayer and those who experienced it explained that they went atop a mountain peak.

From the top of the mountain they saw a little spark in the valley below. Many believed this spark was coming from Saint John the Baptist Mission. The spark began a small fire and gradually grew consuming the lands around them. The fire began getting bigger and brighter and spread to the city of Phoenix and the cities around it. Many people experienced the same vision and realizing how similar it was, they considered it a prophetic vision.

The friars said it was the fire of the Holy Spirit and God had called them to the St. John the Baptist Mission to fan the spiritual fire.

Lunch was held at the Recreation Center Gymnasium in Ak-Chin where the new Catholic priests got to celebrate with family and friends. District 6 residents, James Sundust, Elaine Shelde and Lisa Shelde presented a painting during the meal that represented the vision on which many of the newly the newly ordained priests had based their holy journey.

The families and friends of the friars and members of other Catholic parishes were invited to support and be a part of this passage of priesthood with them. Not only was the St. Francis of Assisi Mission and the Ak-Chin community present, but members of St. John the Baptist Mission, St. Anthony Church Mission, St. Peter Indian Mission, St. Ann’s, and the Kateri Circle of Phoenix attended as well. 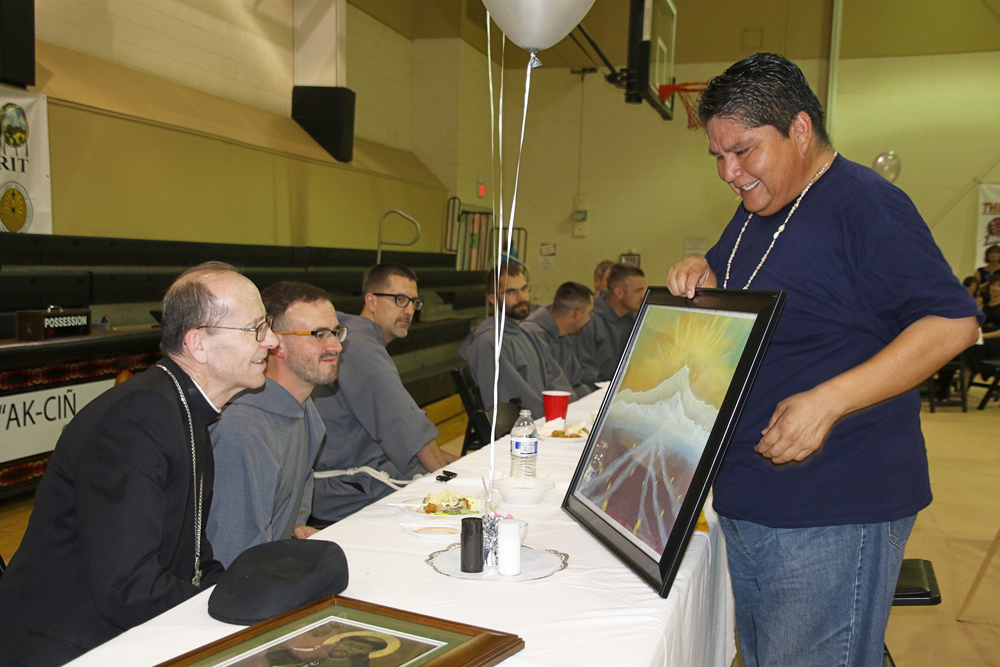