When you first walk up to Native Brew it welcomes you like a street corner bodega that’s been transported into a medical clinic.

The coffee shop, nestled into a corner of the lobby of Gila River Healthcare’s Komatke Health Center, opened last August and is owned and operated by District 6 Community member Rolinda Perez and her husband Albert.

They sell microwaveable meals, yummy snacks, and fresh fruit, but their specialty is delicious, gourmet coffee. And because of Rolinda’s experience at Starbucks, the quality of the drinks is on par with Seattle’s most famous coffee house.

Rolinda has 10 years of experience as a barista and manager at Starbucks. She has long held a dream to open her own coffee shop on the reservation, and now, that dream is a reality.

“This was her passion,” said Sierra Ward, a Pima Leasing & Financing Corporation representative, when asked about Rolinda’s journey to opening Native Brew.

A lot of people who seek loans from PLFC really want to start a business, said Ward, but few have the commitment to create a fully developed business plan, let alone manage the day-to-day tasks of running a business.

Developing a strong business proposal takes a lot of time and effort.

“During that process I broke down seven times...literally crying,” said Rolinda. Now she can smile about it, but in those moments when she thought she couldn’t do it, her husband Al was always there to pick her up and encourage her.

Rolinda said Pima Leasing doesn’t micro-manage or hold your hand, but they do offer a lot of support through classes, experience-based advice, and step-by-step directions.

“We have to empower, not dictate,” said Ward.

After more than a year of praying, planning and development, Rolinda and Al secured a loan from Pima Leasing.

Experience and passion are key ingredients to success, but more than anything you have to be willing to put in the work, said Rolinda. She says she works more than 40 hours per week and used to do more when they were first starting up.

Ward said Pima Leasing decided to support Rolinda because of her management experience, her sense of hard work and because she has a great support system in her family and faith, which helped her through the rough times.

Rolinda and Al faced their biggest struggle several years ago when Rolinda was diagnosed with Graves’ Disease, a common disorder of the thyroid that results in anxiety, tremors, heart palpitations, major swings in energy levels and sometimes depression, among other symptoms. Rolinda had a severe case.

“It was full-blown,” she said. Thyroid pills didn’t help. “So they scheduled surgery right away...and they had the whole thing removed.”

It took months of recovery for Rolinda to regain her sense of stability, she said, but “I’m finally, after all these years, at a normal level, and I feel great.”

While she was in recovery, Rolinda was forced onto disability insurance.

“My husband is one hundred percent my support. I couldn’t have done it without him,” she said. But that season of struggle opened up new opportunities for her future.

In 2014, Rolinda revived her dream to open a coffee shop on the reservation.

Victoria Allison, an administrator at the Komatke Health Center, heard about Rolinda’s plan through the coffee connoisseur’s son, Fernando Valenzuela, who works in the clinic’s radiology department. She met with Rolinda that October and GRHC agreed to let her open up shop in the clinic if she could acquire funding to get the business off the ground. Less than a year later, the clinic’s employees and visitors are able to visit their favorite local coffee shop right in the lobby. Allison says it was a smart move on GRHC’s part.

For Al and Rolinda, Native Brew is a family affair. Al is new to barista work but now that he’s fully trained on all things coffee he runs the store while Rolinda manages the operations and finances. The two live a stone’s throw away from the clinic in the second circle with their daughter, who attends Gila Crossing Community School and helps at the shop after school.

Al, who has supported Rolinda through all the ups and downs, is happy to see his wife succeed. “You have to be there for each other,” he said. “I’m enjoying her having her dream.” 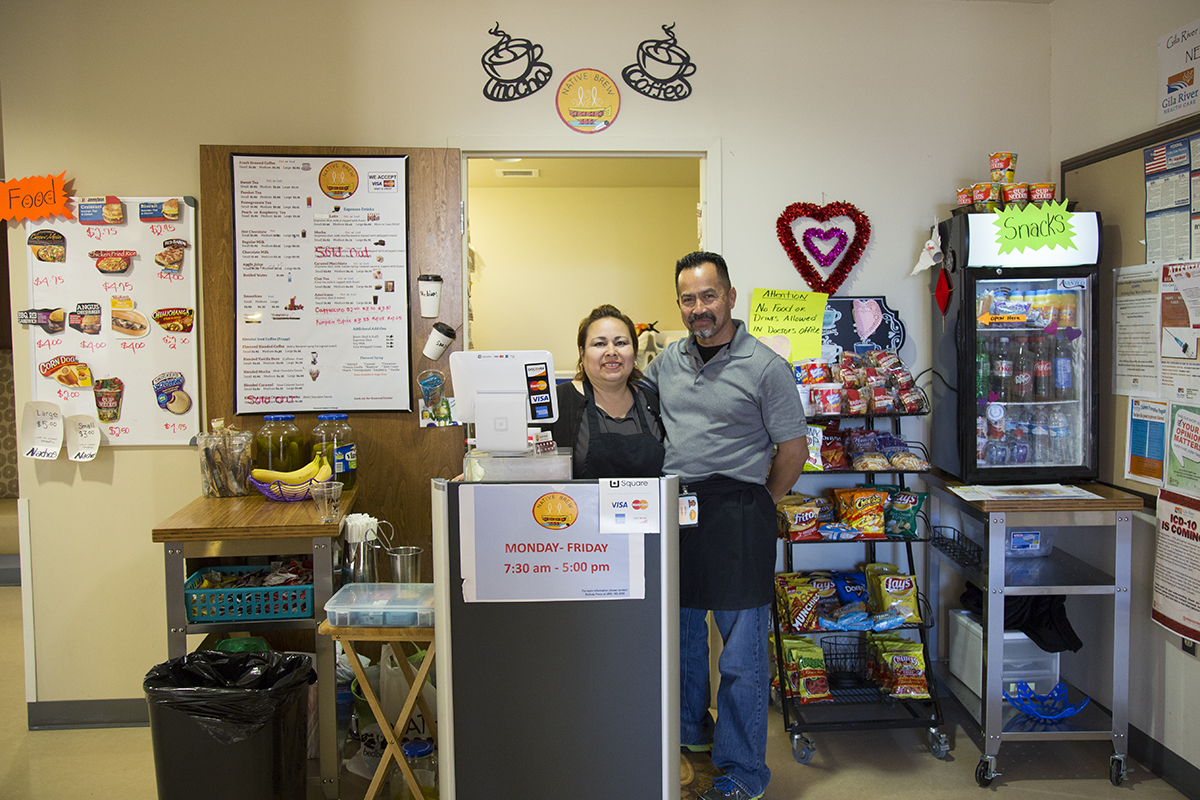 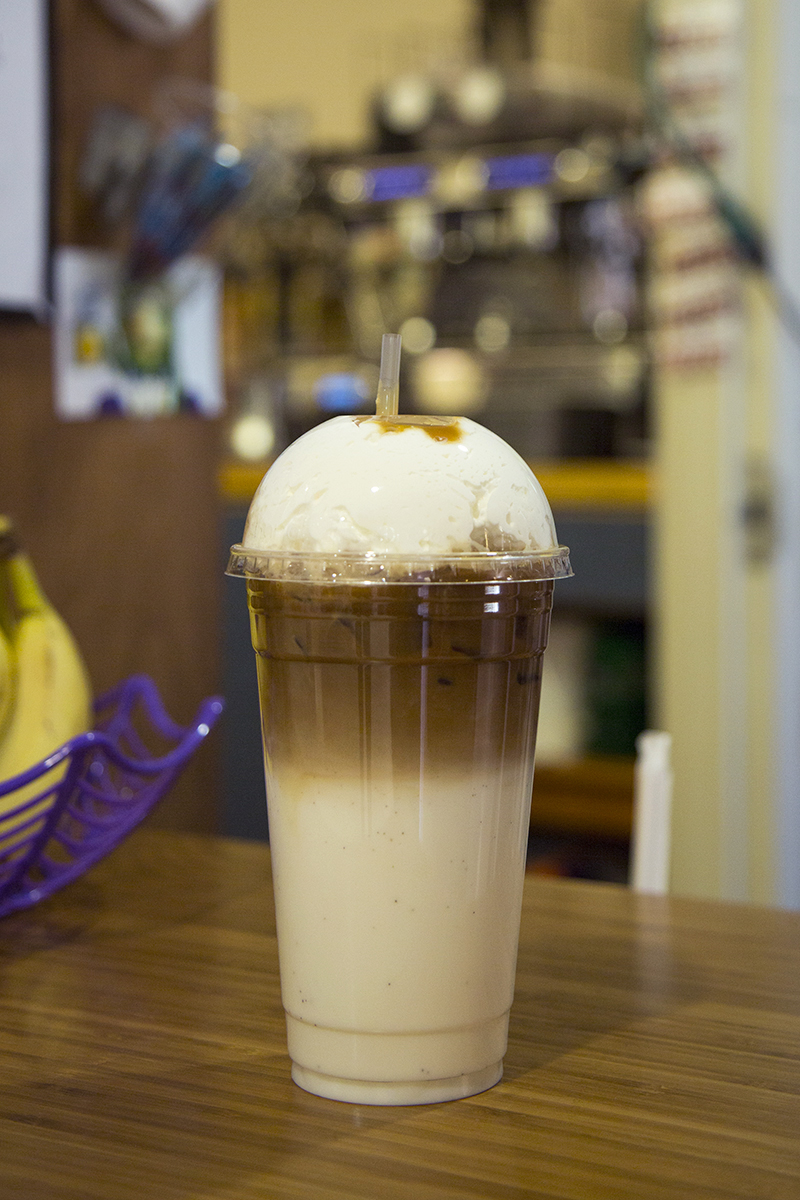 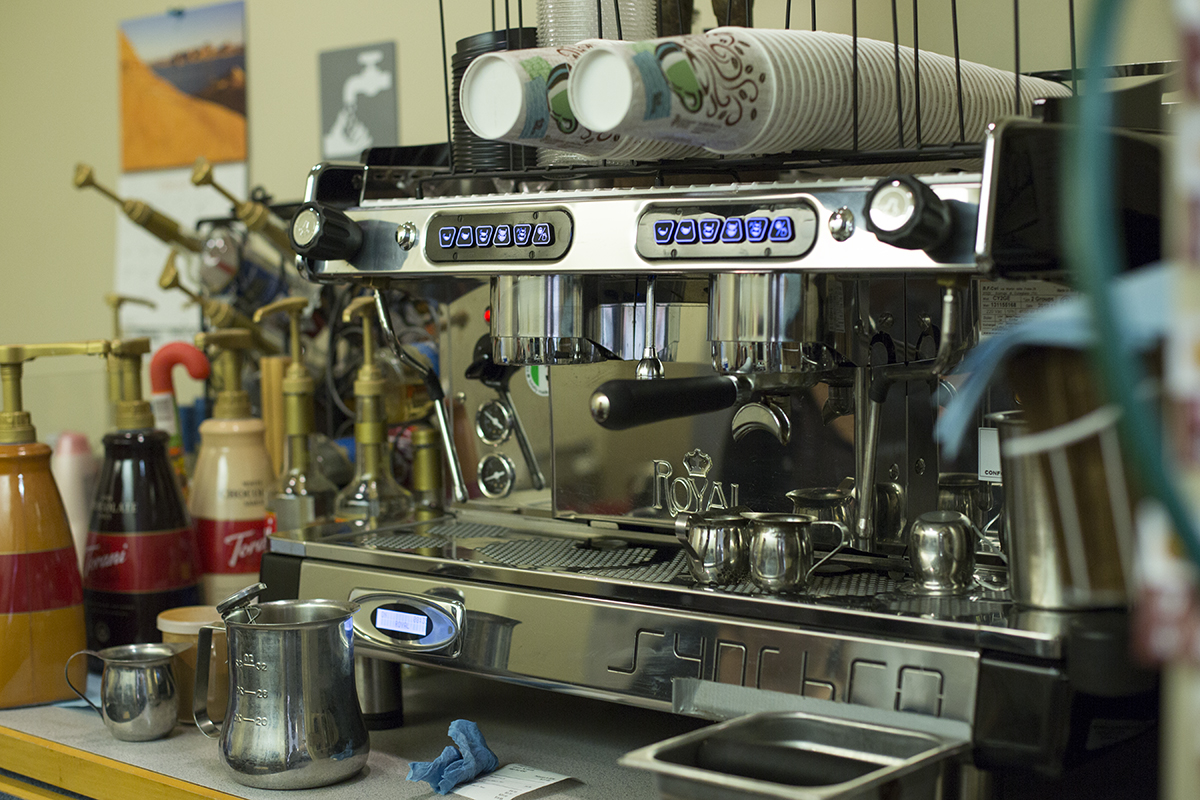