Artist brings life and color back to Sacaton schools

Over the years the colorfully painted faces of Sacaton Elementary School (SES) and Sacaton Middle School (SMS) have taken on the harsh elements of southern Arizona and slowly lost their luster, but thanks to local artist Russell Blackwater the schools have regained their dramatic façade.

Blackwater, 54, whose artwork can be seen throughout the Gila River Indian Community, has been painting murals for the past 16 years, and with his crew, has been hard at work touching-up SES and SMS.

Restoration began late last year, with Blackwater’s crew touching-up the school buildings from the beginning of November through the first week of December. The paint crew moved onto SMS but due to bad weather was delayed, finishing the school’s paint restoration in early February.

Blackwater originally painted the school murals in 2001, which were first restored in 2009. The murals feature traditional O’otham pottery and baskets set upon a desert landscape under a blue sky dotted with drifting white clouds.

Now, and for the next several years, Sacaton students will be able to enjoy the reinvigorated bright colors of their school buildings. 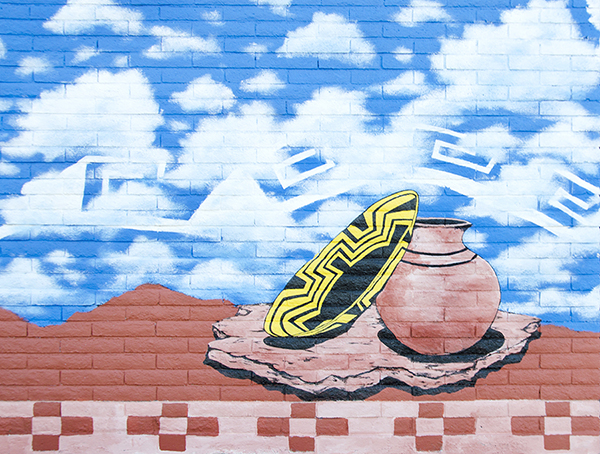