Gila River Indian Community firefighters took on the challenge to donate money to an organization that provides financial support to local first responders.

The 13.1 mile race started at Estrella Mountain Community College and spanned across eight cities throughout the West Valley, including an exchange point at Luke Air Force Base, and then on to the finish line at the Westgate Entertainment District in Glendale.

GRFD Firefighter Gabriel Rubalcaba helped organize the team along with fellow firefighters Kiohud Sanderson, Jamison Ashton and Cheyenne Pancott, who came together after they saw a Facebook post by the 100 Club of Arizona about the race encouraging fire and police personnel to participate in support of a charitable cause close to their hearts.

The 100 Club of Arizona is a non-profit organization that provides support to public safety professionals and their families following tragic circumstances such as death or injury.

GRFD Turbo competed against 15 other first responder teams from across Arizona for a first place prize of $200, which the team planned to donate to the 100 Club if they won, in addition to the already guaranteed $200 that IMS agreed to donate on behalf of each competing team.

Firefighter Ashton had this to say, “We placed second, losing by a heart-wrenching two seconds to a much younger team of competitors from the Arizona Law Enforcement Academy. It was an amazing and hard-fought race that we were leading until the final 10 feet,” said Ashton.

Although the race did not end the way they planned, GRFD Turbo set an impressive chip time of one hour, thirty-six minutes and twenty-six seconds. In order to fulfill their commitment to donate $200 to the 100 Club of Arizona they reached out to fellow GRFD Firefighter and East Valley Firefighter Charities representative, Jesse Zuniga, to assist them in their donation.

“[We] made the donation in the name of our fellow first responders. This was a good opportunity to support our firefighter family,” said Captain Zuniga.

With everything coming together on Mar. 10, the team visited the 100 Club of Arizona main office in Phoenix to present a $200 check to the Director of Marketing and Events, Jennifer Howland, which was broadcast of the social media video sharing app Periscope and posted on the 100 Club of Arizona’s Facebook page.

The team hopes to make the IMS Half-marathon First Responder Challenge an annual tradition and are seeking to enter other races to support their fellow first responders. 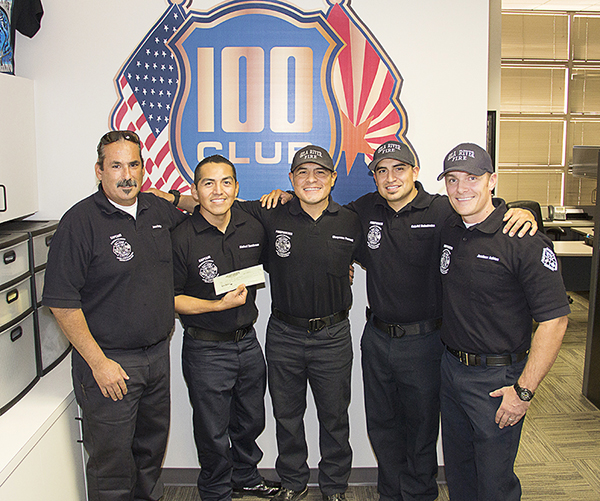