With its Employment and Training Department, which utilizes a combination of employment services and resources to funnel job seekers into a variety of workplaces, the Gila River Indian Community is on the forefront of workforce innovations in Indian Country.

Representatives from the U.S. Department of Labor visited the Gila River Indian Community on Mar. 8 to learn about employment issues facing Native American communities in a meeting with tribal leaders, federal contractors and other agencies with American Indian employment programs.

“The Gila River Indian Community is a role model for combining tribal employment rights and job training into one department,” said Theresa Lujan, director of the Indian and Native American Employment Rights Program in an email. The INAERP is overseen by the Office of Federal Contract Compliance Programs at the DOL.

OFCCP Deputy Director Tom Dowd, said, “No matter where you live in this country, we all need jobs. We all need the dignity of work, and we need the opportunity to be able to take care of our families.”

“The mission of [INAERP] is to advance awareness of employment rights for Indian and Native American workers and job seekers on and near their historically underserved communities,” said OFCCP Director Patricia Shiu.

The representatives from the DOL met with Gov. Stephen Roe Lewis, Lt. Gov. Monica Antone and a number of GRIC departments like the Employment & Training Department, Tribal Employment Rights Office, Americorps, and labor services agencies from other Arizona tribes.

Lana Chanda, director of the GRIC E&T Department, said the DOL likes the system E&T has developed because “it’s like a one-stop-shop for people. They don’t have to go to [multiple] places to try to find work.”

After meeting with tribal leaders and employers, the guests from the DOL enjoyed a brief tour of the reservation and learned a little more about the history and geography of the Community.

“It’s an honor to host the Department of Labor,” said Gov. Lewis. “It’s important to protect the Native American wage-earners and job-seekers… We as tribal leaders do our best to support that among federal departments.” 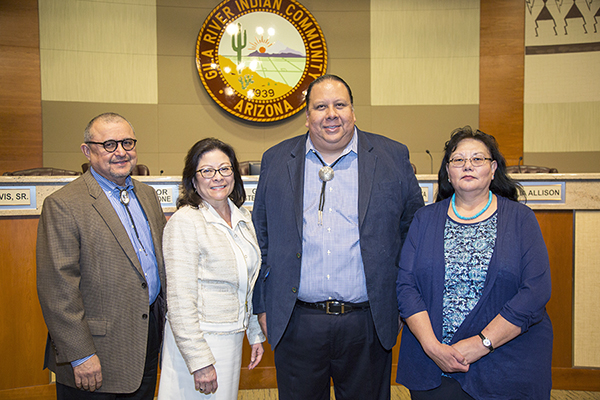