The law of a community is the glue that unifies individuals and allows people of differing opinions and ideas to come together, forming an organized society that can prosper in peace. And while members of a community must follow the rule of law in order to keep their community cohesive, those who practice and interpret the law must also abide by a set of rules in order to promote and maintain the practice of law.

For this very reason, primary stakeholders made up of the Gila River Indian Community Court, Office of the General Counsel, Four Rivers Indian Legal Services, Defense Services Office, Office of the Prosecutor, and private law practitioners came together in 2012 to develop the GRIC Bar Association.

The reasons for developing a Community bar association are to maintain a high level of quality in Community lawyers and judges, foster competent lay advocates, and meet requirements defined in the Tribal Law And Order Act (TLOA) and Violence Against Women Act (VAWA) that could allow GRIC to gain jurisdiction over natives and non-natives within the boundaries of the Community.

Claude Jackson, attorney for the Defense Services Office (DSO), said about Community concerns over the current lack of advocate oversight:

“Myself, I am beholden to the State Bar of Arizona, so if I make a mistake...the bar is going to hear about it,” said Jackson. “I don’t want to lose my bar license from the state...so, I have to watch myself.”

However, while all lawyers working within the Community must adhere to the ethics and rules laid out by the State Bar of Arizona and face punishment if running afoul of those rules, advocates have no oversight whatsoever. Meaning, that anyone can come into GRIC, whether a Community member or from another tribe, purchase a business license, and begin advocating.

“They [can] come and put up a [private practice] out here and we don’t know much about them,” said Jackson. “Most of them are Community members here, but some of them could just be someone that got kicked out of another tribe for doing some unethical things and they just come here, there is no checking into that, there is no oversight.”

But not all advocates are like that, Jackson continued, some of these individuals are very sincere and truly want to help Community members. Being an advocate is a tradition in Indian Country and has been part of tribal justice systems for a long time, he said.

Nevertheless, the need for oversight remains. But that’s not the only benefit to having a GRIC Bar Association. It will be a step forward for the Community in having tribal jurisdiction over all Community members, including non-natives who enter the boundary of GRIC.

Tribes want jurisdiction over their lands, said Jackson, and we are working towards that with TLOA and VAWA, where we will be able to eventually prosecute non-Natives that commit acts of domestic violence against our Community members.

“It is going to allow us to meet these requirements [defined by the TLOA and VAWA] and allow oversight over not only the attorneys but the advocates as well,” said Jackson. “And that would ease any concerns that Community members would have when they retain any kind of counsel within the Community court. That is a big advantage of it.”

The Gila River Indian Community Bar Association is looking for potential members. If you are an advocate, or interested in becoming an advocate, please contact the GRIC Court. Furthermore, make sure you are on the Gila River Indian Community Court Authorized Attorney and Advocate List by July 1, 2016, because any members on the list could be grandfathered in to the GRIC Bar Association until an exam is ready to be administered. 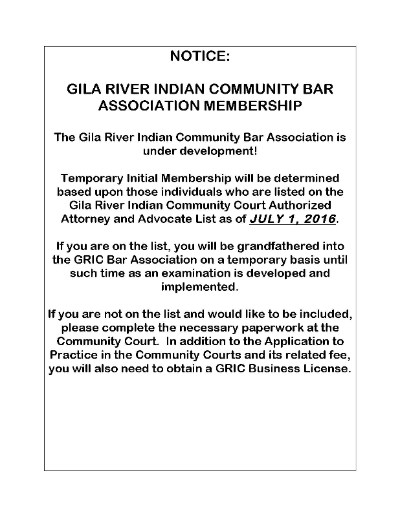