Governor’s Employee of the Month for May through September 2016

Last month, the Gila River Indian Community’s Human Resources Department handed out five Governor’s Employee of the Month (GEM) awards for the months of May through September. The five employees awarded were chosen because they enrich the Community through their works, accomplishments, and contributions in the workplace.

The first of five nominations was made at a luncheon held at the Juvenile Detention Center on Oct. 19.

Before presenting the May GEM award, Human Resources Employee Assistance/Training Specialist, Richard Weschrob, asked the audience to listen to a short biography of the recipient before revealing the awardee’s name.

“This person has been with the Department of Rehabilitation and Supervision (DRS) for over fourteen years,” said Weschrob. “He began his career at DRS as a Detention Officer and worked his way through the ranks. Never once did he ask to do something he wouldn’t do himself.”

Bradford accepted the award, saying that he really enjoys working for the Community and is looking forward to another 15 years.

“It is very reassuring that everything that I have been doing, that the department [has] been working towards with the Tribal Law and Order Act and Violence Against Women Act…that we are on the right track,” he said.

“It is a cliché, everybody says this, but honestly, I couldn't have done it without everybody that I work with, it is a good group of people and I really appreciate everything that everybody has done.”

Four more employees were awarded with GEM plaques at a GRIC Directors’ Meeting held in the Governance Center Council Chambers on Oct. 21. Weschrob and Marsha Chischilly, HR Employee Development Manager, introduced each awardee by talking about how each individual’s hard work and commitment to the people of GRIC has had a positive effect on their co-workers and the Community.

Weschrob introduced Regina Antone Smith, GRIC Employment and Training Coordinator, as the June GEM recipient. He said that Smith truly gives all of herself to help people and she genuinely wants to see Community members succeed in their chosen career paths.

While accepting the award plaque, Smith said, “I do like working with the Community. I like helping them succeed and keeping on top of them. When they get further along it makes me feel good. When they accomplish something, to see that spark in their eye when there was nothing before, that’s truly amazing,” she said.

Chischilly said that Jackson is the type of person who practices the platinum rule: finding what someone wants and making sure they receive it. She said that Jackson is a great listener who puts her community first and that elders always have something good to say about her delicious cooking.

Jackson accepted the GEM plaque saying, “I just thank District 2, the elders, and everybody who works here. I love the Community.”

The GEM recipient for August was District 6’s Elderly Liaison, Frances James. Weschrob said that James is a mover and a shaker, always willing to help, whether it is creating art projects for the Community’s children or getting elders sweating at her popular Zumba classes.

“With her amazing presence and attitude to keep the Gila River Indian Community’s children happy and our beloved elders healthy, she is a life and soul saver,” Weschrob said.

Donna Henderson, GRIC Domestic Violence Shelter Lead, was announced as the September GEM recipient. Chischilly said of Henderson, “This employee…[who] exemplifies strength, character, determination, and compassion, is a constant source of encouragement and support as she uplifts everyone around her.”

Henderson said of her job as the Domestic Violence Shelter Lead, “When you see those girls come into the shelter, you see them broken-hearted and sometimes you just don’t know what to say. Through my…experience and training…I’ve been able to just sit and listen.”

She added that while many Community members may know her to be quite talkative, she was at a loss for words when receiving the GEM plaque.

Each employee was chosen as a GEM after being reviewed by the Governor’s Office GEM Committee and each awardee received a commemorative plaque and “certigift” of $200.

If you know someone who goes above and beyond the call of duty to improve the GRIC workplace and Community, fill out a nomination form and send it to employeedevelopment@gric.nsn.us. Nomination forms are due on the 20th of each month. 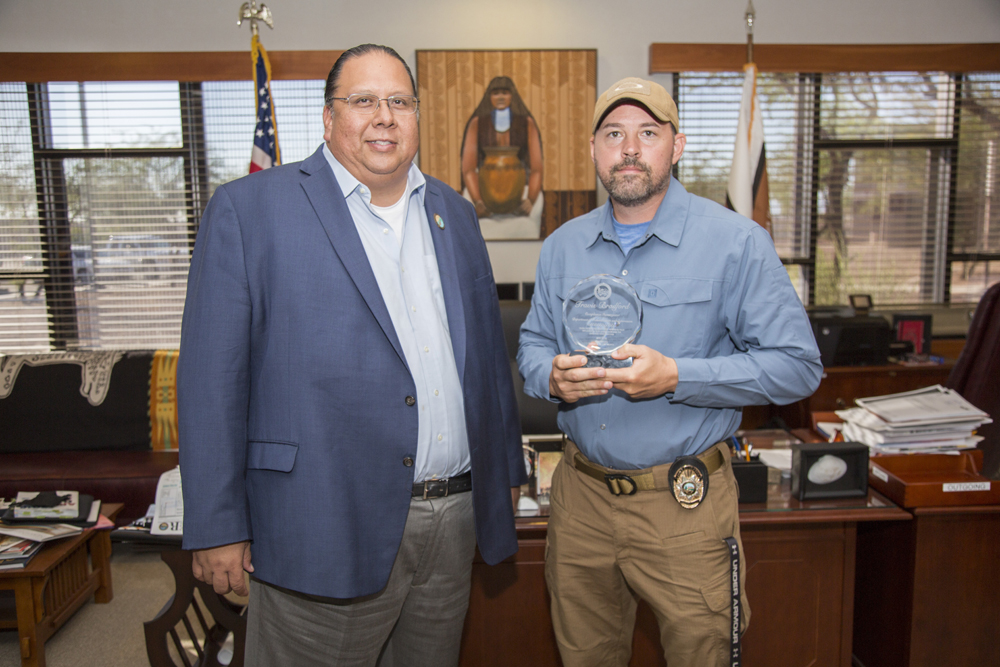 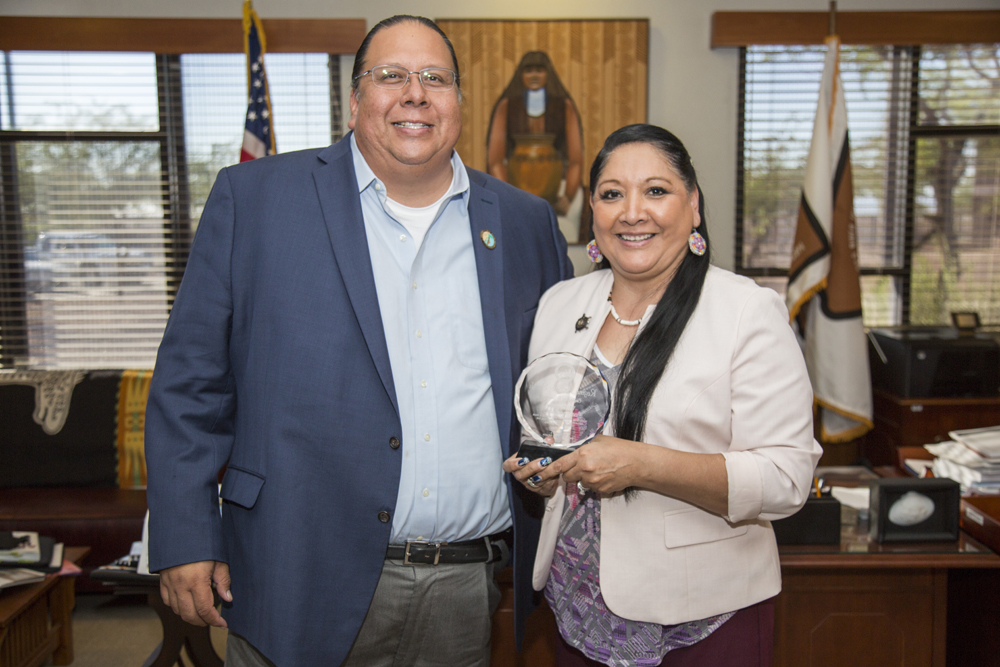 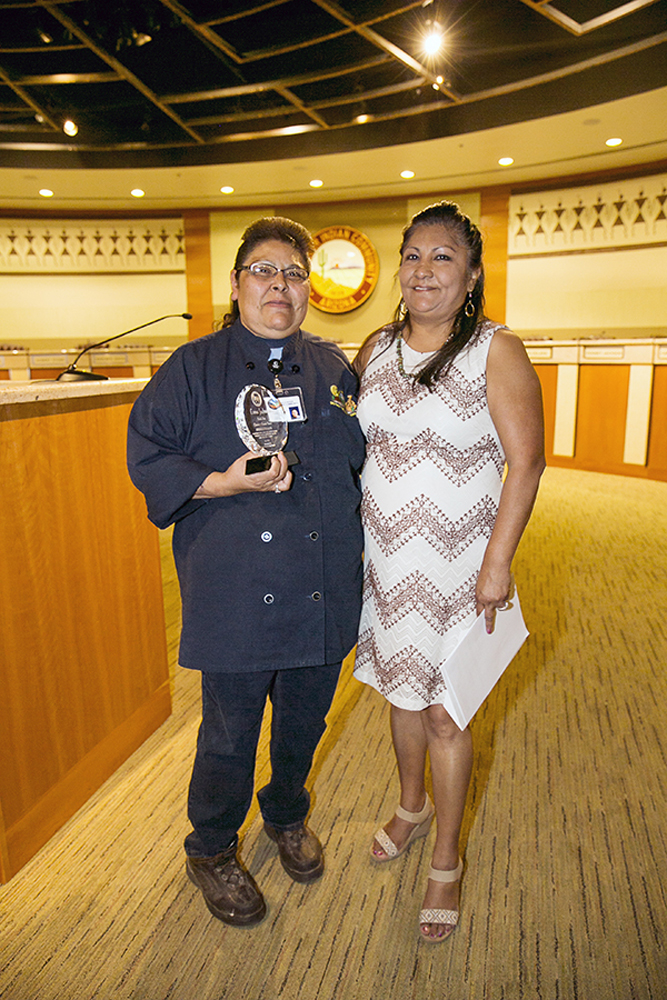 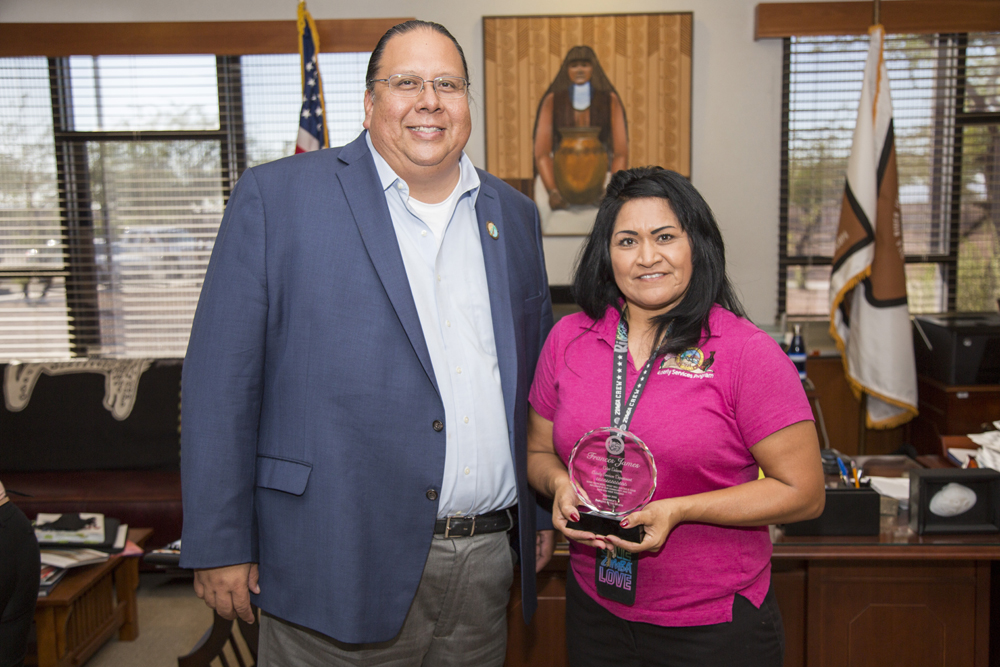 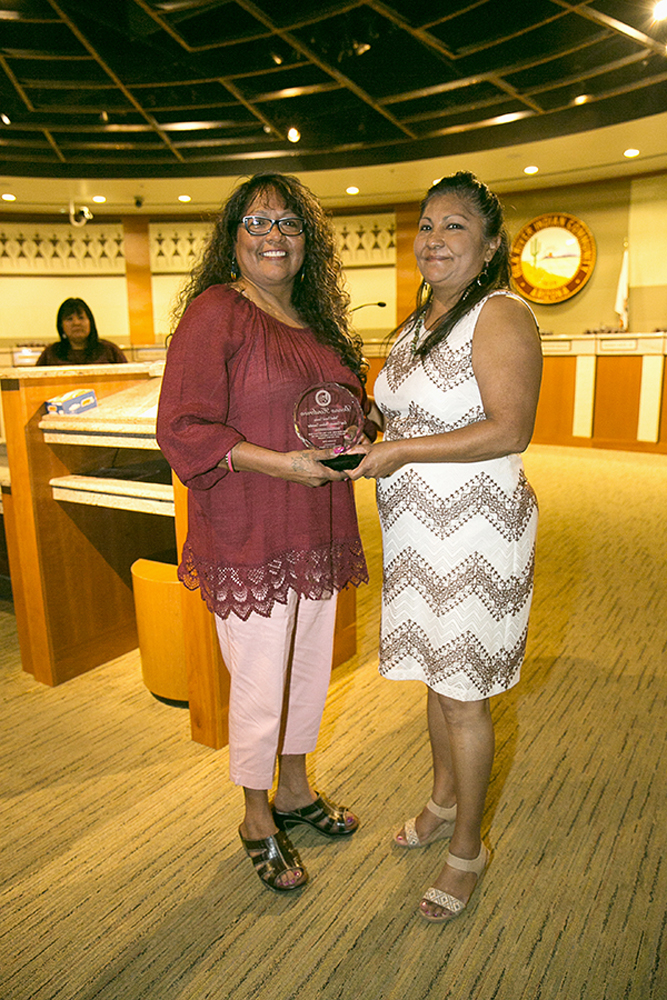