The Gila River Indian Community has always taken pride in the military service of its Community members. From the volunteers who served in the first Arizona National Guard in 1865 to the trenches in World War I, the battlefields in World War II, the Korean War front, and the jungles of Vietnam, the call to service was never ignored.

For two Community members, who were recently honored by the Community and were recognized at Arizona’s Run for the Fallen event, that call was answered with not only their service but with their lives.

Billy Farris and Joe Jackson had different journeys in life but for the second week in October, they were linked by their bravery and sacrifice. Gov. Stephen Roe Lewis issued two proclamations in their names and their families, friends and comrades were presented with American flags at mile markers dedicated to their memory as part of 146-mile memorial run called Arizona’s Run for the Fallen.

Gov. Lewis’ proclamations were issued on Oct. 11, which dedicated Oct. 14 as Corporal Billy Farris Day and Oct. 16 as Lance Corporal Joe Jackson Day. Flags at all government buildings were ordered to be flown at half-staff from Oct. 14-16.

On Oct. 14, the day that Farris’ hero marker was honored by the runners, his family was presented with the Arizona Gold Star Military Medal by Arizona Department of Veterans Services Director Wanda Wright at a special ceremony at St. Peter Indian Mission School, where he attended, in Bapchule, District 5. St. Peter’s is also home to the Billy Farris Memorial Hall, a one-story feast house adjacent to the campus.

The Arizona Gold Star Military Medal honors Arizona members of the Armed Forces who have been killed in action.

Col. Wright said to Cpl. Farris’s family, “I extend my deepest appreciation and heartfelt gratitude to family and friends of Billy, who sacrificed his life in defense of [our] Nation and freedom.”

At the ceremony, Farris’s father Larry Antone said, “When he grew up that is all he wanted to be was a soldier.”

Farris was assigned to the 5th Battalion, 20th Infantry Regiment, and 3rd Brigade, 2nd Infantry Division based out of Fort Lewis Washington.

Cpl. Farris’s mother Elizabeth Antone, said her son was part of a search operation to locate a downed U.S. Air Force F-16 pilot Maj. Troy L. Gilbert, who was part of a squadron based out of Luke Air Force Base in Glendale, Ariz.

Maj. Gilbert, a fellow Arizonan, lost his life the same day as Farris, when his jet crashed while supporting friendly ground forces north of Iraq.

Inside of the St. Peter's chapel, students started the morning by giving a prayer and singing traditional O’otham songs. Before filing out of the chapel, students sang “God Bless America,” in English and O’otham and a “Going Home” song to send off the students that were going to start their own version of the memorial run.

The students were joined by Gov. Lewis as they trotted their way along the paved sidewalk that snakes through the school.

After the walk was finished, the students went back into the chapel to hear opening remarks from Gov. Lewis before the special presentation to the parents of Cpl. Farris. “Always remember Cpl. Farris, who is more than just a name on the hall, but it is important that we see that name there, because he gave his life for all of [us], the Gila River Indian Community, for all Native Americans, for the state of Arizona, and his country,” said Gov. Lewis.

Farris’s mother, Elizabeth, said everyone at the school was instrumental in helping raise her son while he attended St. Peter Indian Mission School and that since his passing it was even more reassuring to have them still be by their side.

While on deployment Elizabeth said that he always carried with him the teachings that he learned at school and would do his daily prayers half a world away.

Gary Anderson a member of Haskell Osife-Antone Post 51 and the Veterans and Family Services planning committee talked about the motivation behind the whole event.

“At first [we] wanted to do something at [his] hero marker out on Highway 79, but a lot of things came together. I was in a meeting with Community Manager Pam Thompson and Gov. Lewis and informed them about the idea of putting something on at St. Peters,” said Anderson.

He said as soon as the idea was presented to Community leadership it turned into something bigger and with the coordination with school Principal Sister Martha Carpenter, Anderson said, everything came together.

The Arizona Run for the Fallen event, which is a three-day trek from Tucson to Phoenix uses “Hero Markers” to honor Arizona, servicemen and women who have been killed in action in recent conflicts, but honors all past service members who have given their life in combat.

Although the runners were a little behind schedule, the group made it’s way to where Farris’s family was waiting and saluted Elizabeth and delivered an American flag and a copy the hero marker.

Jackson’s honors persisted on Sunday Oct. 16 when the Arizona Run for the Fallen runners presented the Ira H. Hayes Post 84 with an American flag and his hero marker.

Since Jackson was adopted by a family from the state of Washington, Post 84 received his marker and flag which will be mailed to his family in the Northwest. “It’s just one way to give back to them,” said Tony McDaniel of the Ira H. Hayes Post 84. 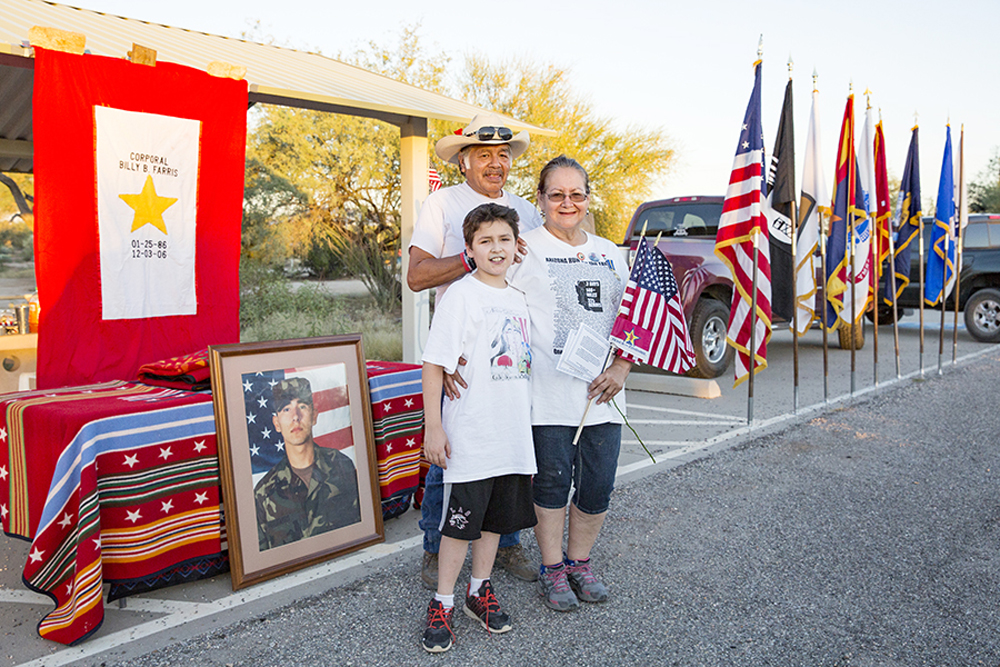 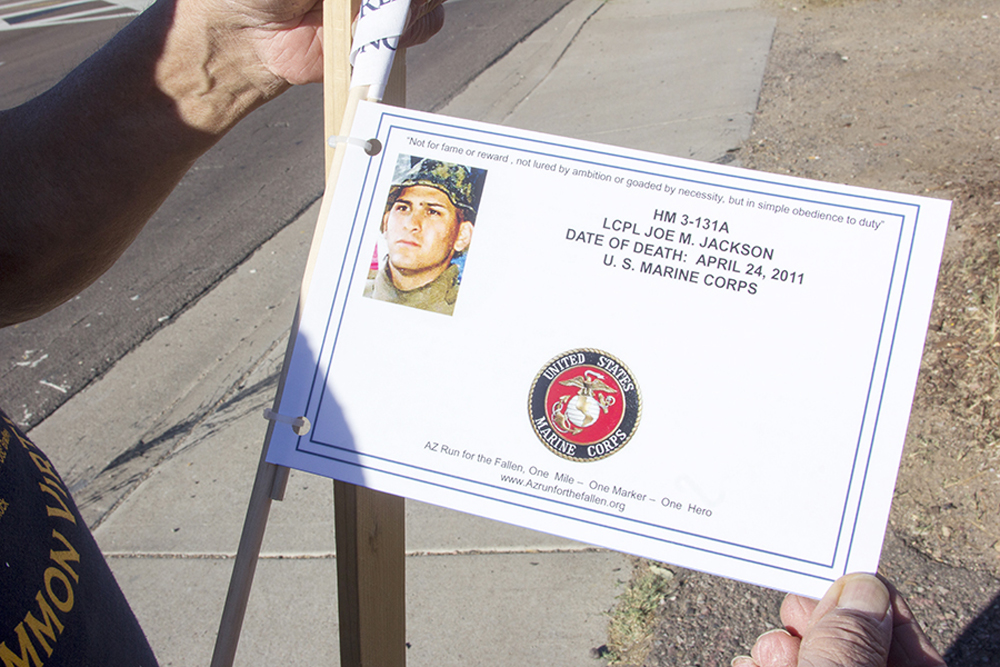 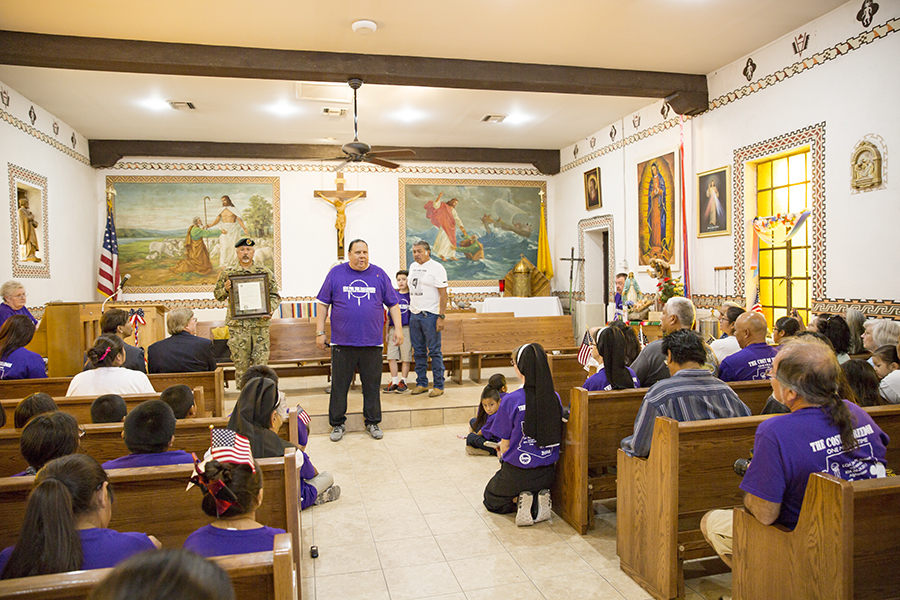 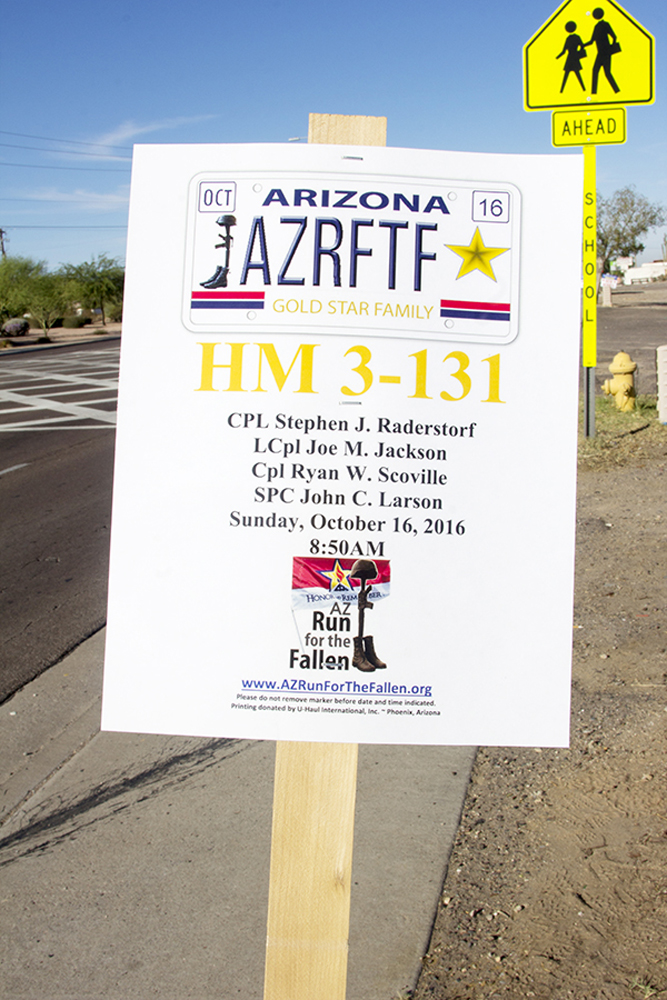 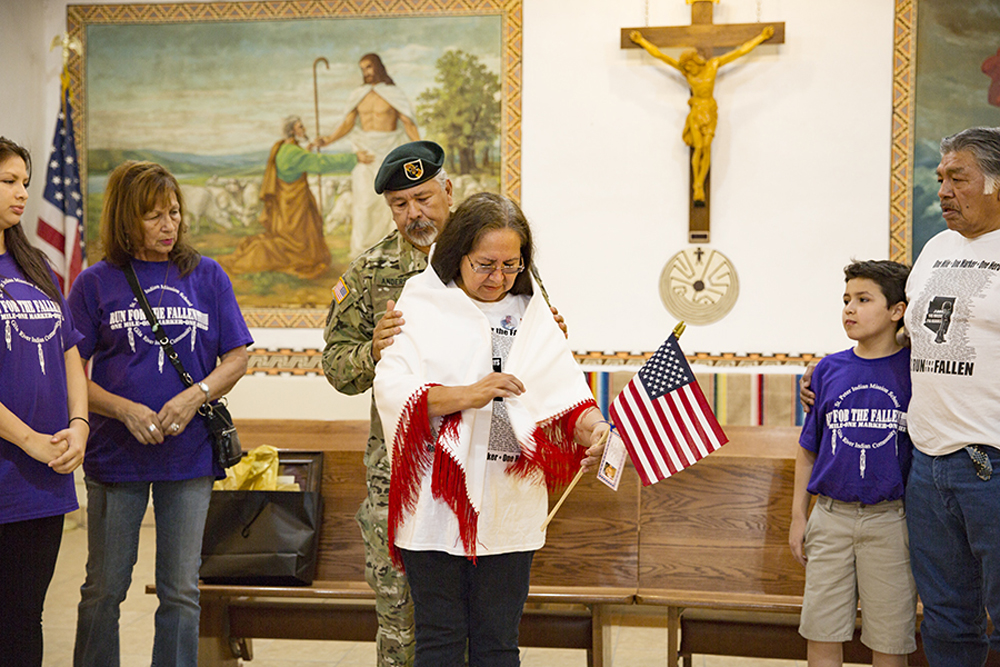