In a tribute to his father’s legacy, Gov. Stephen Roe Lewis honored Rodney Lewis at the NCAI Gala, Oct. 13.

“It is incumbent upon us to recognize our elders,” said Gov. Lewis. “My father fit so many roles. He is a veteran, and he used the G.I. Bill to go to law school from there.”

Rod, as he’s known, is celebrated for his nearly 30-year career as the General Counsel for the Gila River Indian Community, and his work that helped the tribe win its water rights.

Rod also worked on and won the case Central Machinery v. Arizona Tax Comm’n, which went to the U.S. Supreme Court in 1980.

“We were in that first wave [of Native American lawyers]. We now have grown to 2,500 Native American attorneys. Rod had his vision helping his Gila River Indian Community deal with their biggest problem and that was the water rights issue. He put in 30 years working on that and he got it done, the largest Native American water rights settlement in history. I’m so honored to call Rod a friend.”

Rod said it was an honor to be recognized “before such a distinguished group of tribal leaders. Every tribal leader [here] has so much to work for, spends so much time working on the issues for your people.”

He said a key to his work was having the support of the Community Council, and thanked them for their work.

Gov. Lewis presented his father with a shell necklace.

“Shell jewelry is a very ancient art,” he said. “This design [is] a war shield design. It was held by our last hereditary chief, Antonio Azul. He carried this design on his shield when he went to war. He was an incredible intellectual. He was also a warrior, and a leader. That’s why I want to give this to my father.”

He gave another shell necklace with the image of the man-in-the-maze to Cladoosby.

The traditional basket dancers group Achem A’al closed the evening with a series of ceremonial songs to honor Rod.

“Leadership is hard,” Gov. Lewis said, but it’s worth the hard work “when you see...that dedication turned into victories and hope for the people.”

He said, “We greatly appreciate you honoring him in a good way in front of so many tribal nations, an example to them to stand their elders up while they’re still with us, to let them know how much we love them and care about them and to recognize the great work they’ve done for all of Indian Country.” 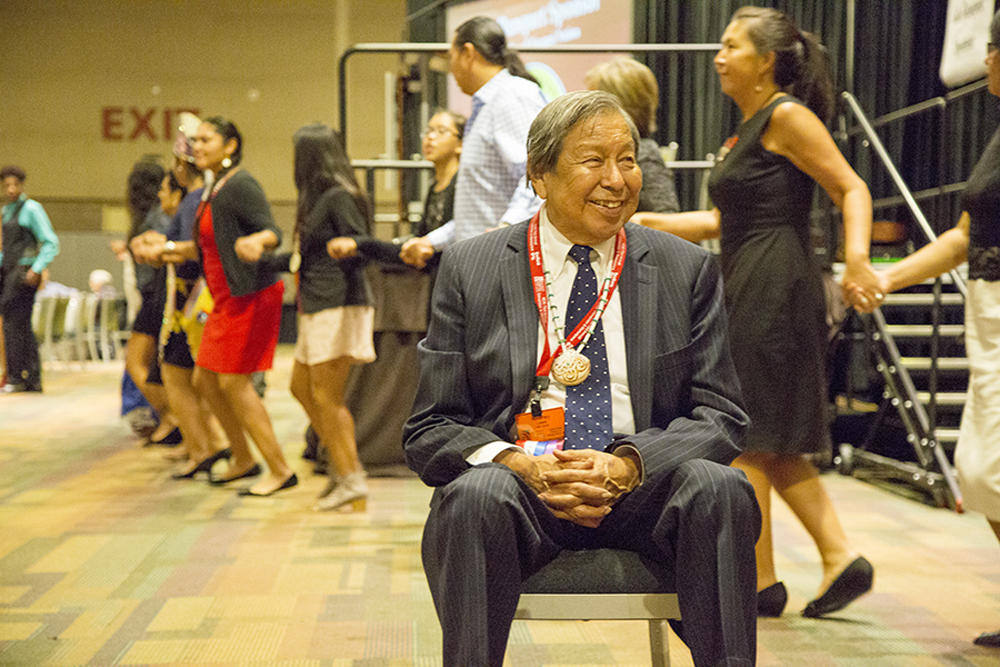