The 73rd Annual National Congress of American Indians was well underway on the morning of Oct. 11 when Gila River Indian Community Gov. Stephen Roe Lewis stepped up to the podium at the conference’s Third General Assembly held at the Phoenix Convention Center.

Gov. Lewis said that in 1942 the U.S. Supreme Court found that federal agencies have “moral obligations of the highest responsibility and trust” when working with tribal property or interests. He said that while he agrees with the sentiment that federal agencies have a trust responsibility to protect tribal resources, lands, and assets; federal consultation to tribes can still fail.

He said that failures occur for a variety of reasons, which include federal agencies viewing consultation to tribes as unimportant, treating consultation as an empty process done only for the sake of doing it, and agencies unaware of how their actions affect tribes and thus not properly informing tribal communities of their planned projects.

Indian Country needs to use the upcoming nationwide infrastructure consultation with the federal government, said Gov. Lewis, to make sure tribes are participating in real dialogue with federal agencies. This should be done to gain full understanding from the federal government so they will consider the impacts of their infrastructure projects on tribal lands, resources, and people, he said.

When consultation fails between tribes and the federal government, he added, the effect can be disastrous, which is what happened with the Dakota Access Pipeline.

Gov. Lewis said that GRIC is also experiencing a situation similar to the Standing Rock Sioux Tribe’s predicament with the Dakota Access Pipeline, specifically that federal agencies are not listening to GRIC’s concerns over the South Mountain Freeway Expansion.

He said that the Federal Highway Administration and Arizona Department of Transportation both approved the freeway, which cuts through South Mountain, a culturally significant and natural resource to GRIC.

According to Gov. Lewis, four points of how the highway will affect GRIC are: that “it will forever alter the landscape and our views of South Mountain; isolate Community members from culturally significant locations and resources; destroy sites on or around South Mountain that serve as Traditional Cultural Properties and are federally protected; and destroy or interfere with trails, shrines and archaeological sites that have cultural significance to [the Gila River Indian Community].

He said that the Community’s tribal members and leaders, from the very beginning, had opposed the freeway expansion project. And, even though there were consultations with GRIC, the federal government did not consider the Community’s concerns. Due to the lack of meaningful consultation with the federal government, the freeway expansion project has moved forward and will permanently impact or destroy the tribe’s traditional cultural properties. And just as the Standing Rock Sioux’s last recourse was to file a lawsuit, GRIC was also left with same option of filing a lawsuit in order to protect the tribe’s culture.

Gov. Lewis said that the tribe’s resources should not have to be spent on lawsuits to protect its culture and resources, especially when those funds could be used to help its Community members.

How Consultation Has Worked

In contrast, there are examples of consultation with the federal government that have worked, said Gov. Lewis.

One example, he said, was that the U.S. Fish and Wildlife Service made a decision that could have affected the delivery of water to GRIC. GRIC was not consulted by the agency and the Community only learned of the issue late in the process of the project.

However, in order to avoid future issues from occurring again, the agency began regular government-to-government meetings with GRIC, which had the effect of increasing communication between the tribe and the U.S. Fish and Wildlife Service.

Due to this increase of communication with the agency, said Lewis, he signed the “Statement of Relationship” with the Southwest Region of the U.S. Fish and Wildlife Service in 2015.

He said that the Statement of Relationship was the agency recognizing GRIC’s sovereignty in managing its own lands and resources. He added that other agencies should look into implementing similar relationships with the Community.

How To Improve Consultation

Gov. Lewis listed several of his own thoughts on how consultation between the federal government and tribal nations could be improved.

He said that it is imperative for tribal nations and federal agencies to develop relationships with one another, thus opening meaningful lines of communication; federal agencies must make sure that no matter what decisions are made, that they are able to be implemented on a local level; because federal staff generally does not understand the interests or needs of tribal nations, they receive training on when consultation should take place and how to consult; consultation must be meaningful, especially at the earliest stages of the decision making process; federal agencies must follow their own consultation policies because what is the point of policy if it is not followed, he said.

At the end of his 20-minute speech, Gov. Lewis told the general assembly made up of tribal leaders from all over the United States, it is crucial for all of Indian Country to gather together and speak with one voice, to make sure tribal nations are heard by the federal government. 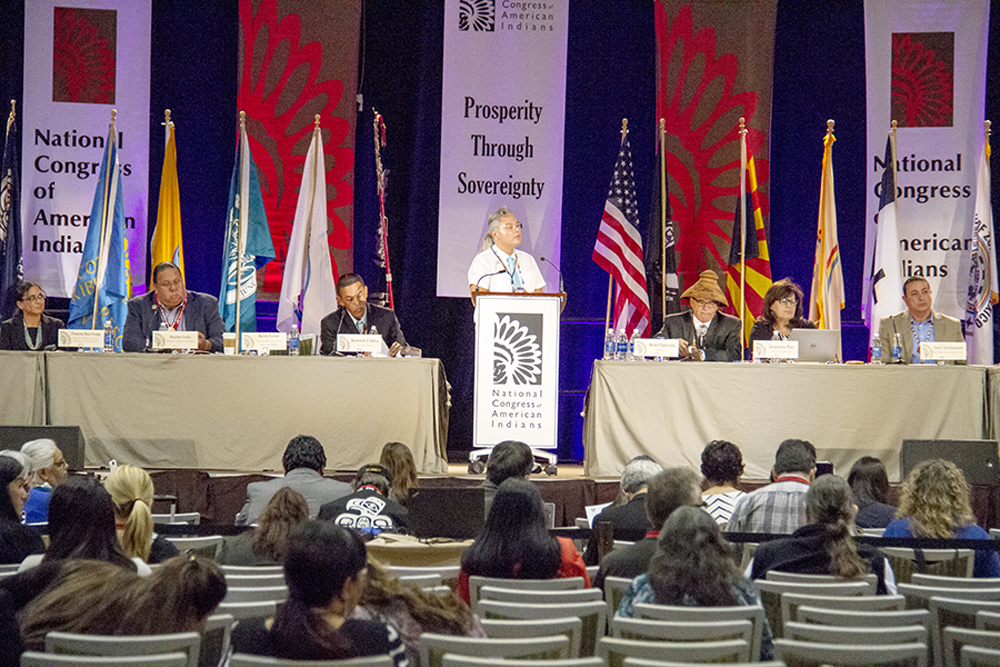