According to Gov. Lewis’s proclamation, the day is designated in recognition of Shelde’s contributions and achievements as an educator at the Gila Crossing Community School and that the Gila River Indian Community is grateful for the hard work and dedication Shelde embodied. Her commitment to educating GRIC’s youth improved the educational and spiritual lives of the Community’s youth and families.

“The Gila River Indian Community hereby pays special tribute to Ms. Shelde for being a supreme example of a human being who embodies a unique blend of leadership, devotion, compassion, and resourcefulness.”

Born in Phoenix in 1952, Shelde was raised in Komatke Village and attended South Mountain High School and graduated from Arizona State University in 2014.

Shelde was a certified Native Language Teacher by the Arizona Department of Education, one of only five individuals to receive the certificate, and was the cultural teacher at Gila Crossing Community School where she encouraged students to learn about O’otham Himdag. 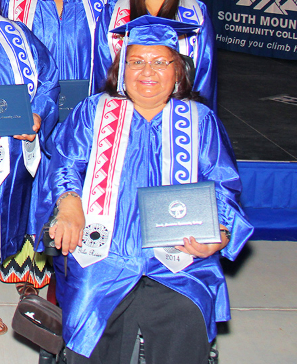