Tribes converge in Phoenix for NCAI

For one week, the Valley of the Sun was the center of the Native American world with the National Congress of American Indians holding their 73rd Annual Convention and Marketplace at the Phoenix Convention Center in downtown Phoenix under the theme: Prosperity Through Diversty.

From Oct. 9-14, American Indian and Alaskan Native representatives converged to bring to the forefront a myriad of issues affecting Native communities both on reservations and in Washington, D.C.

The meeting had several general assemblies, breakout sessions and cultural highlights throughout the week with other events taking place in the surrounding communities like the NCAI Cultural Night, which was hosted by the Gila River Indian Community and held at Rawhide Western Town and Event Center.

The week began with a National Tribal Water Summit, which was sponsored by NCAI, the Intertribal Council of Arizona and the Native American Rights Fund. The summit, held Oct. 9, featured panel discussions and other speakers to address critical water issues facing Native American tribes.

“Water is life for all of us, for the tribes, we’ve always known this,” said Gov. Stephen Roe Lewis, in his welcoming remarks.

Gov. Lewis also participated in a panel, which focused on water rights implementation and economic development. Several other tribal leaders, tribal counsels and representatives from the Department of Interior and policy advisors spoke on critical issues pertaining to water rights including litigation, drought impacts and current Indian water rights settlements and negotiations.

Michael Connor, Deputy Secretary of the Department of the Interior gave a keynote address on the impact of the Obama Administration on Indian water rights settlement policy. He also congratulated Gov. Lewis and GRIC’s commitment to their water rights implementation.

“The Gila River Indian Community was a force to be reckoned with, with respect to asserting it’s claims and it’s rights to water,” said Connor.

NCAI was officially called to order by NCAI President Brian Cladoosby on Monday, Oct. 10. Gila River veterans served as the honor guard for the posting of the colors. Highlights from the first general assembly included a welcome from City of Phoenix Vice Mayor Kate Gallego, updates on Supreme Court cases and an Indian health service update.

A networking focal point of the weeklong conference was the NCAI Marketplace. The lower level of the Phoenix Convention Center held dozens of informational booths and tribal exhibits for conference goers to meet with representatives from local and out-of-state communities.

Gov. Lewis continued in his representation of the Community at the Third General Assembly on Oct. 11. He was a presenter on a panel called “Federal Infrastructure Permitting and the Trust Responsibility,” (see page 11). The panel centered on the Standing Rock Sioux Tribe’s fight to protect its lands, waters, sacred places and natural resources and Gov. Lewis said Standing Rock parallels GRIC’s fight to protect South Mountain and stop the proposed Loop 202 expansion.

Another critical issue that directly affects the Community is the controversy surrounding the Indian Child Welfare Act. The Native child protection legal structure is being threatened by opponents against ICWA and Gov. Lewis lent his thoughts in a breakout session which promoted child welfare and family wellness.

Jacqueline Pata, NCAI Executive Director, introduced Gov. Lewis and said, "Gov. Lewis has a wide experience in [this] field and has a concern for the welfare of the youth and in reaching out to those that can assist the Community, like NCAI.”

Gov. Lewis was emphatic in his call for unity for ICWA.

Gov. Lewis said, “It is national organizations like NCAI that have really helped tribes understand what their rights are when it comes to standing up for the future of their communities that find themselves under attack.”

The conference then shifted late Tuesday as NCAI rallied for American Indians and Alaskan Natives to vote in the Nov. 8 presidential election. The Native Vote Pep Rally was an informative and interactive event to directly involve Native Americans in the importance of voting.

Sen. John McCain (R-AZ) joined the Fourth General Assembly on Wednesday Oct. 12 and gave his support to NCAI for their work on Native American issues. “I’m proud to be with NCAI. It continues to be a vehicle for empowering Indian leaders from around the country to advocate safeguarding government to government relationships between your sovereign nations and the United States government,” said McCain.

Every NCAI Convention and Marketplace has a cultural night to bring together all the attendees to partake in the local heritage of its host nations. This year was no different with the convention reaching a cultural crescendo at the NCAI Cultural Night hosted by the Gila River Indian Community.

Held at Rawhide Western Town and Event Center, the event consisted of entertainment, dinner, arts and crafts and several cultural sharings and blessings from the diverse communities that make up Arizona’s Native population. (See Cultural Night above).

District 5 Community Council Representative Robert Stone gave the invocation to the final General Assembly on Friday, Oct. 14. He administered a blessing and shared an O’otham song about the legendary “dust devils” that whirl in the Community during the summer months.

The convention officially adjourned at 12 p.m. The 74th Annual Convention and Marketplace will be held in Milwaukee, Wis., from Oct. 15-20, 2017. 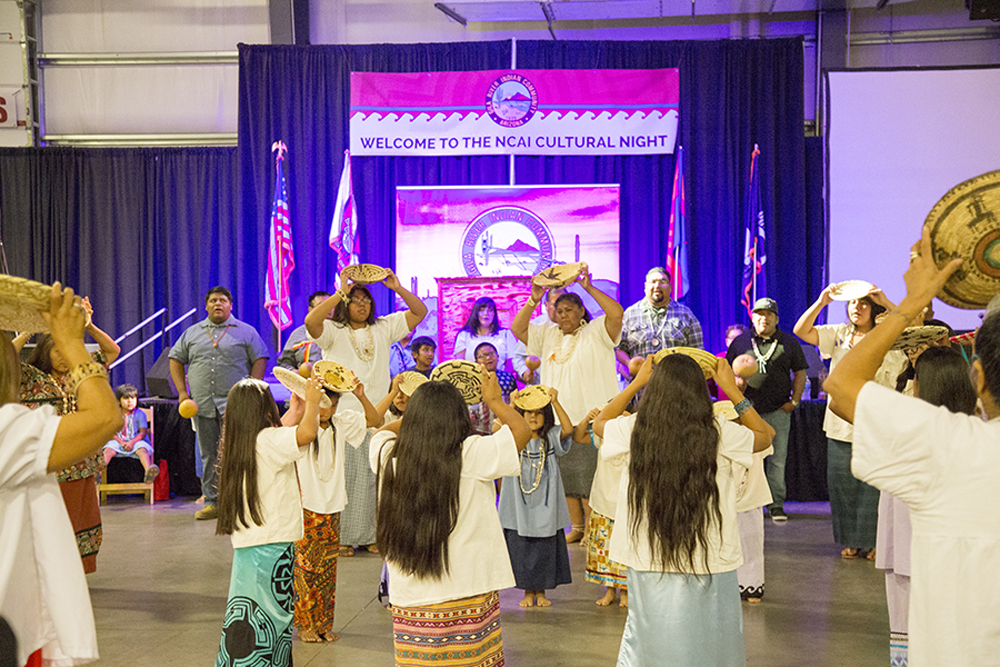 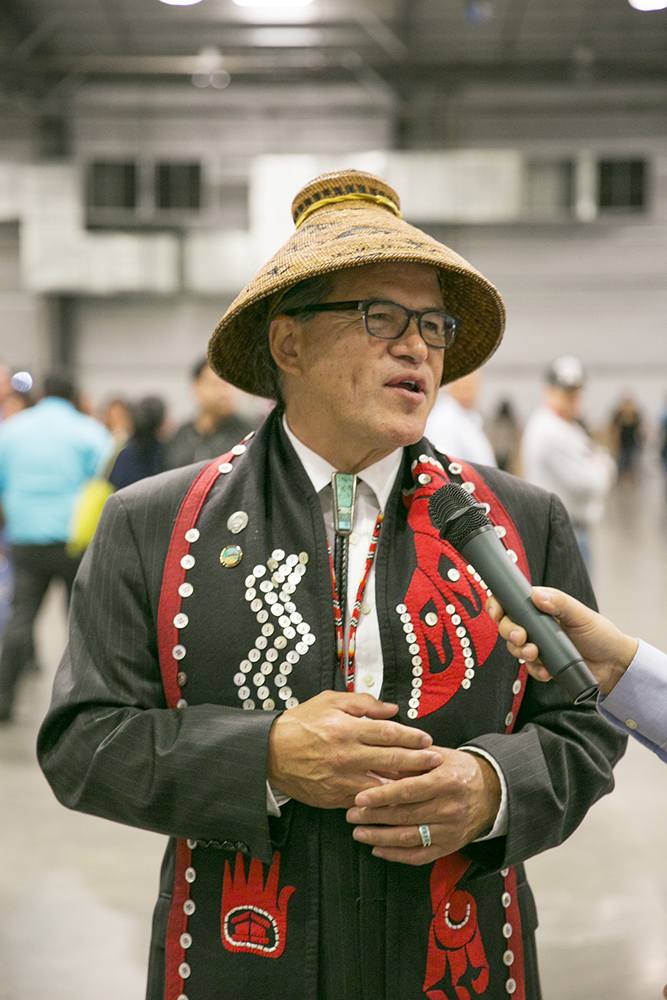 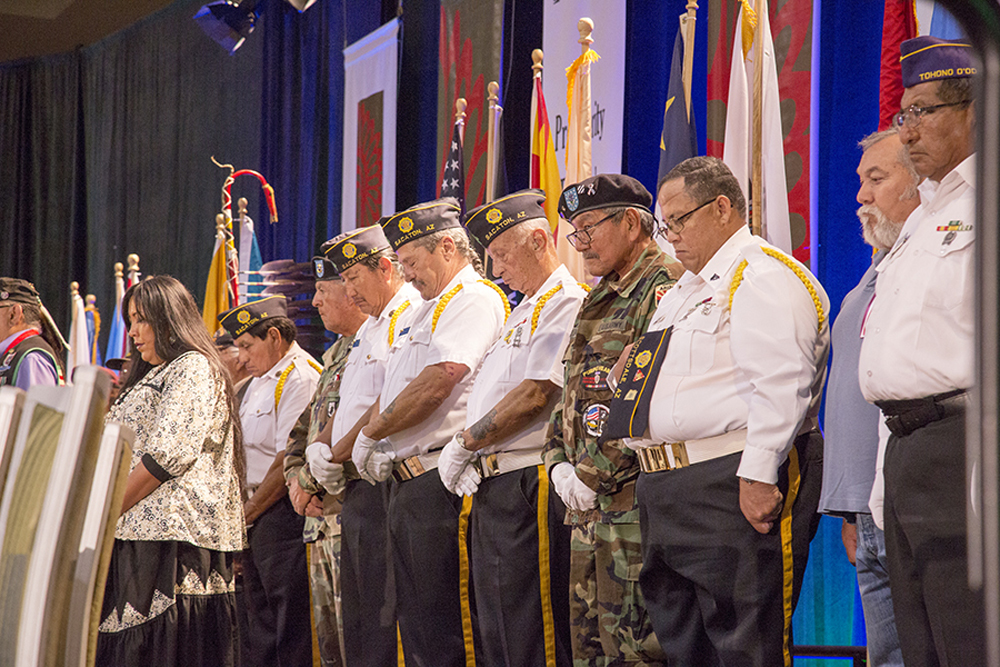 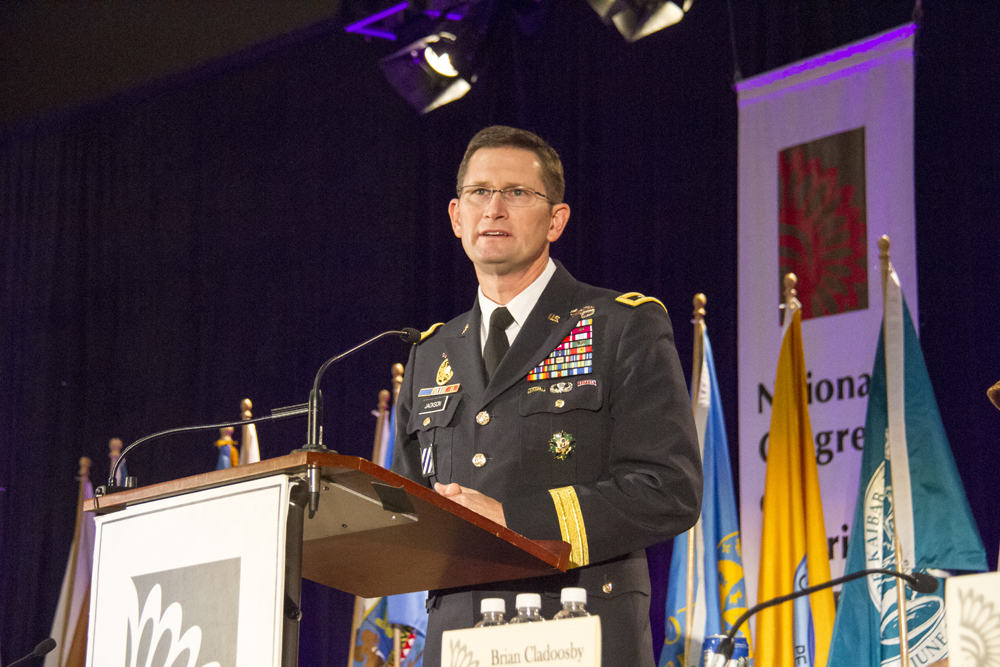 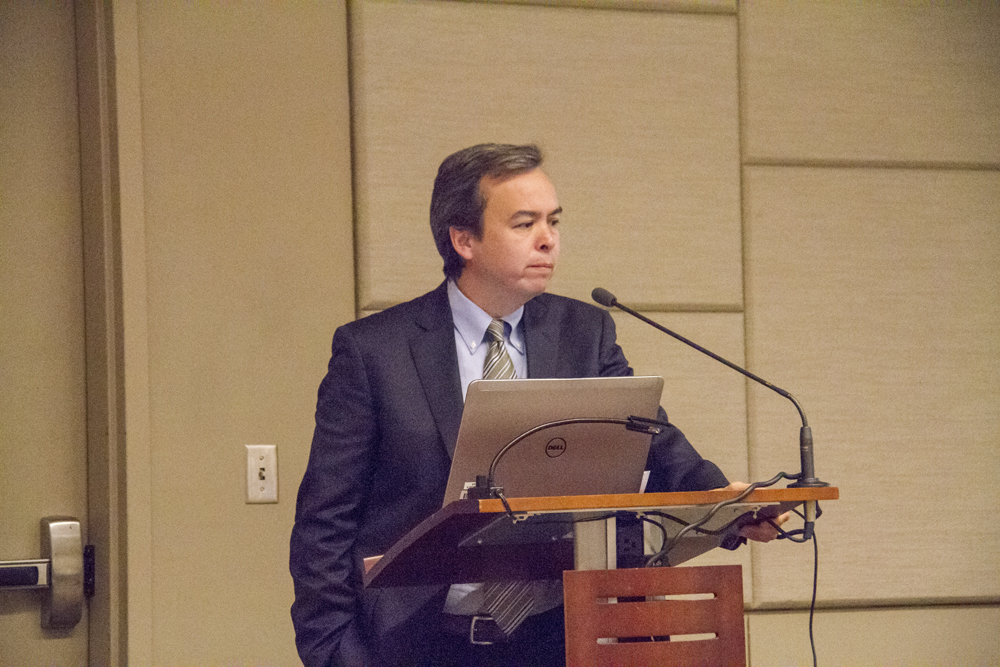