Eight plywood boards cling to the walls of the Huhugam Heritage Center exhibit hall, each screen-printed with an image representing a different element of O’otham life.

“These are symbols of who we are,” said Chandra Narcia at the opening night of her art exhibit at the Huhugam Heritage Center.

As the gallery filled with friends, family, and other visitors Aug. 19, Chandra handed out paper prints of her works to each guest.

One board wears images of cacti, another features quail, and another abstract water designs. All bear elements of Narcia’s identity that reminded her of home and kept her grounded while she was living far away.

“It’s a collective of who you are that helps you continue or get through what you need,” she said.

Narcia is originally from Sacaton. She grew up there, learning the history and traditions of her people, the Akimel O’otham. In addition to being O’otham, Narcia is Hopi and Laguna.

In 2002 she left one of the smallest towns in Arizona and moved to the largest city in the country: New York City, where she earned her Bachelor’s Degree in Communication Design and Art History from Pratt Institute.

After seven years in the Big Apple, she moved to the City by the Bay, where she earned her Master’s in New Media (Web Design & Motion Graphics) from the Academy of Art – San Francisco.

Living away from home wasn’t easy, but, she said, she was able to stay on course through prayer and sharing her culture with others. Regular visits home “really made me appreciate where I grew up,” she said.

A print titled Strength of the Flow features water designs that represent the history of the river the Akimel O’otham are named after.

“That’s always been a story that I share with any other person that’s not from Gila River because that’s so important. … We’re this tribe here, and our water was taken, and that was basically our lifeline that went through our community.”

She says, “Our river isn’t here physically, but it lives in all of us because we are [the] Akimel O’otham, River People.”

Narcia’s print of the quail is representative of O’otham stories.

“We didn’t always grow up hearing every [story], so it’s kind of like we have to learn and re-learn our culture,” she said. “These stories, they’re telling us about our land, the animals, and they’re also teaching lessons.”

Another print features a gourd. “Our songs ... have been sung for many, many years, and it’s so important for us to learn or to hear them, even, because those are...what we still have to carry on.”

One of her favorite prints, she said, “is the one with the woman that’s grinding the corn, [and] also the one titled Strong O’otham Women. … So I had two that were representing women because when talking about being grounded, for me, the women presence in my life” was really strong.

Another print features a Gila Monster with sun rays bursting behind it.

“That was one of my favorite ones. … Throughout my years, I’ve only seen one (in the wild),” she said. “They’re very special creatures. That’s why I called that piece Blessing.”

Growing up in Sacaton, she said, she used to go on bike rides with her dad, the former GRIC Gov. Richard Narcia. He would point out landmarks and plants to her and tell her the history of their people while they rode through the desert.

Sharing O’otham history and culture with others kept her grounded, but learning the cultures of others helped her grow.

Living in New York, she said, “you meet people from all over the world and you get to know their culture.”

“If any youth are interested in leaving here and going to school,” Narcia said, “I think that’s great because once you step out of what you’re used to, it opens up this whole new world of possibilities [and] different cultures and learning.”

Narcia came back to Arizona in 2011. She now resides in Phoenix and works for the Community as a graphic and web designer. In her spare time, she contributes to a number of non-profit and volunteer groups.

At her exhibit’s opening night, Tim Terry offered a blessing.

“I see Chandra’s work as sharing her thoughts and her feelings with the Community,” he said. “She’s a strong O’otham lady, a strong person. … Himdag is important, and that’s what’s reflected in her work.” 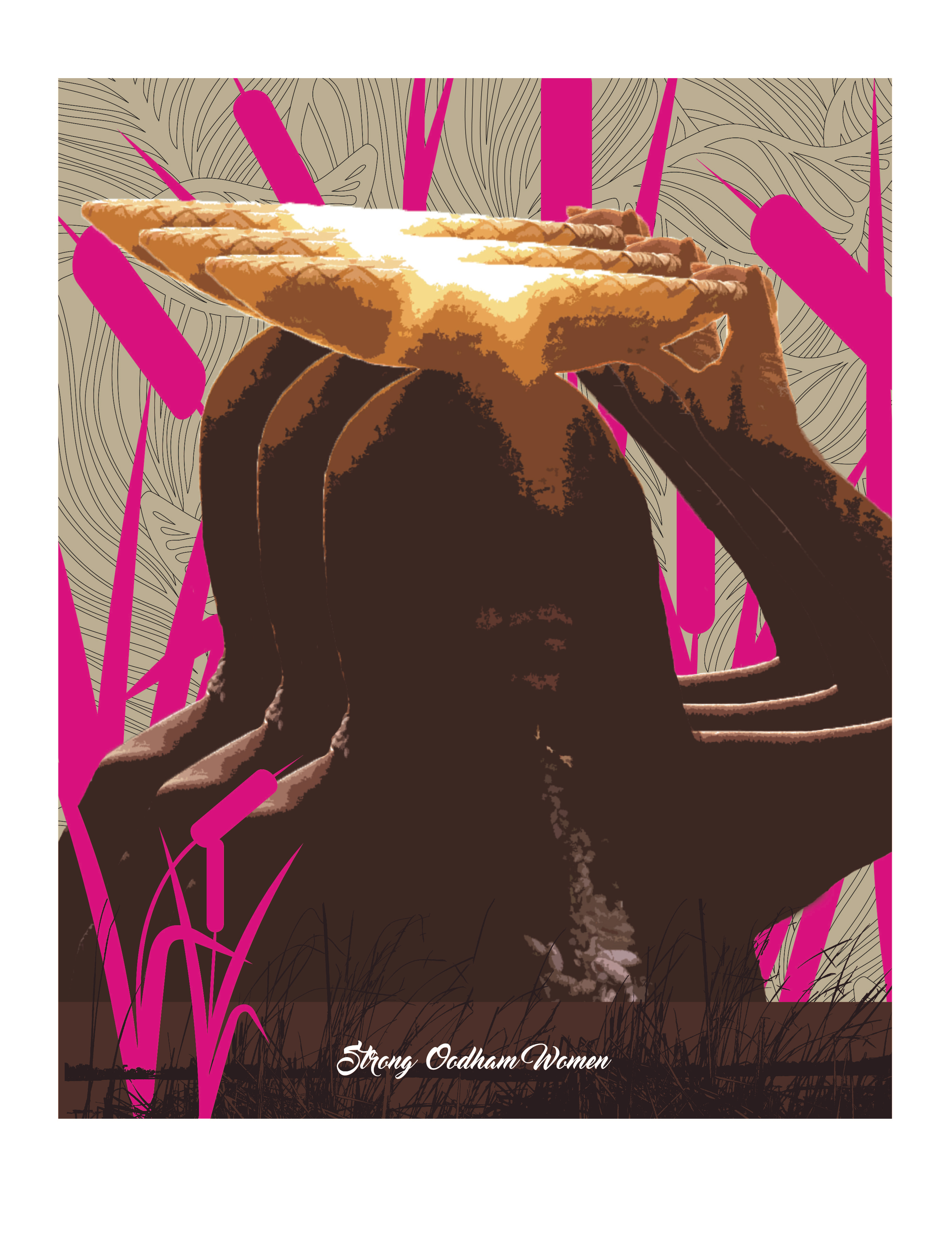 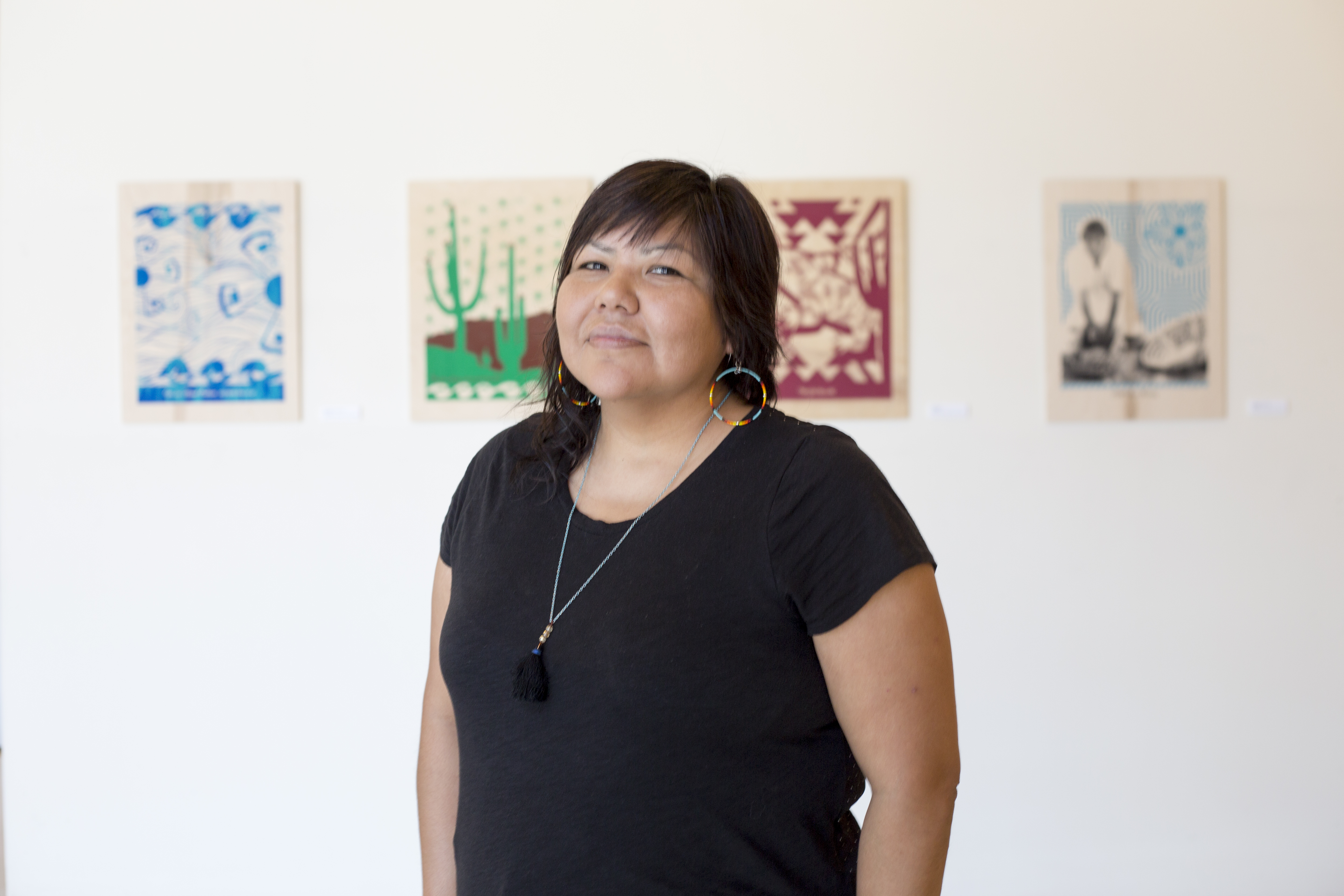