“The main idea we wanted to get across today is [to] share with you what we do outside of the uniform,” said Detective Manuel Duarte to the group of Community members in the gymnasium. He said typically, people only ever see a police officer in “a situation that’s gone bad, and you need assistance. But we also want to interact with everyone [at events] like this.”

Duarte, a GRPD officer and a mixed martial arts fighter in his spare time, shared his passion for MMA with Community members through the event, where kids learned how to punch, grapple and defend themselves.

“Never initiate, never start the fight,” Duarte said, but practicing MMA is “a way of exercising and self-defense.”

It wasn’t just for kids, though. The event was open to all Community members, regardless of age.

Leroy Antone, Sr. of Gila Crossing brought his son Leroy Antone, Jr. to the event “just for the exercise. And I like to watch UFC.”

Plus, he said, “We like doing this kind of stuff together.”

Leroy and Leroy Jr. like to go to Community health events along with the rest of their family. The junior Antone said he especially liked doing the heavy rope exercises and learning takedowns on the mat.

Community member Mark Fairburn, 17, said he enjoyed the event. A wrestler for Maricopa High School, the senior said working with the pros taught him some new techniques.

After the fighting and grappling lessons, Duarte introduced a number of his fellow officers to the group and had them share their hobbies and interests.

Seven GRPD officers talked to the audience about the hobbies they enjoy. Officer Adam Boyd said he spends time training for and competing in ultra-marathons. School Resource Officer James Milano does sprint triathlons and practices kung-fu. Officer Ester Poolaw is on a softball team in Tucson.

The event is part of GRPD’s efforts to connect with Community members on a friendlier level.

Officer Michael Fairburn knows how familiarity between the public and the police can be beneficial to both. Having grown up in District 6, he said, now as a police officer, familiarity with the families and culture makes things smoother when trying to quell a tense situation.

“A lot of people, especially in the West End, they all know me, so when I go out there it makes my job easier,” he said.

Fairburn acknowledged the tensions between the police and the communities they are sworn to protect across the nation.

They don’t see each other as people, he said, but he concluded, “We’re all people, we all love stuff and we all have jobs, families, hobbies. ... Everybody has somebody they care about and that loves them too. We’re all the same.”

District 5 Community member Carol Alphus said, “That’s awesome that officers can come out of their professional [setting] and then get into their comfort zones to relate to us Community members and to share their hardships [as well as] what they do off-duty and how they keep themselves healthy and fit.”

Alphus was very appreciative of GRPD’s attempt to bridge the gap between the officers and the Community, especially the youth. She said it was great “to see my sons enjoying this event...get out of [the house] and to interact with officers.”

She has three sons, two of whom, she said, already want to go into the military after high school. Officer Fairburn in particular, she said, has been especially influential in the boys’ lives, and thanked him for being a role model for her sons.

A number of MMA gyms volunteered their time, equipment, and personnel to support the weekend event in District 5, including Fight Ready, Team Driven, U.S. Elite Combat, and the World Fighting Federation.

The Wellness Center also contributed to the event, setting up a training circuit with ropes, speed ladders, and medicine balls.

Duarte said the GRPD is trying “to reach out and let people know that we love where we work, so we want you to get to know us, so that you feel safe and comfortable when you call for our help.”

On Sept. 7 from 8 – 10:30 a.m., the Department will host “Coffee with a Cop” at the District 3 and 7 Service Centers, where people will be welcome to visit with officers and get to know the people behind the badge that are policing their neighborhoods. 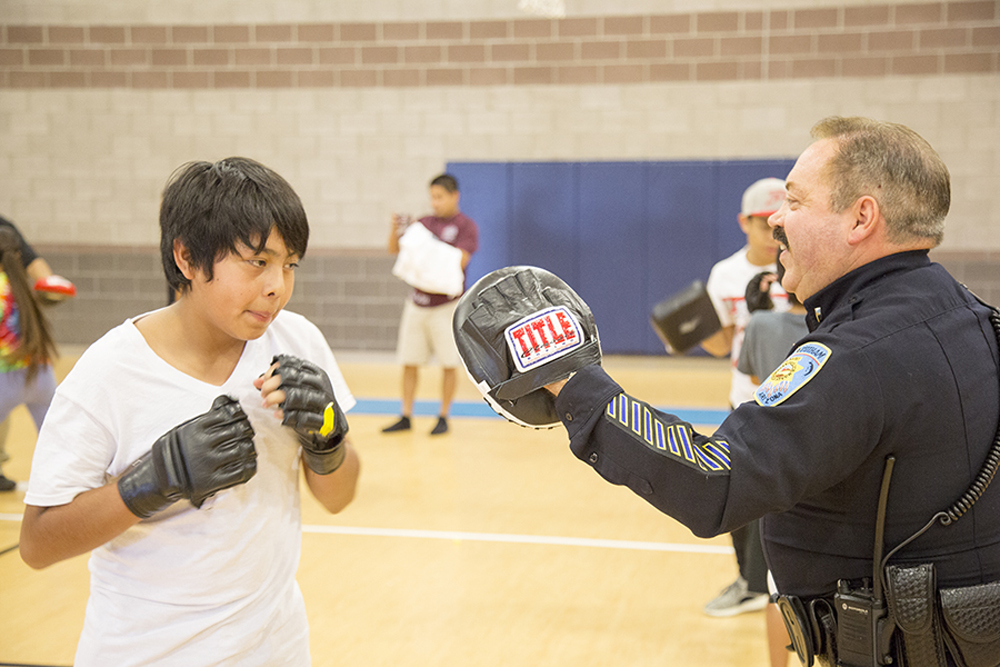 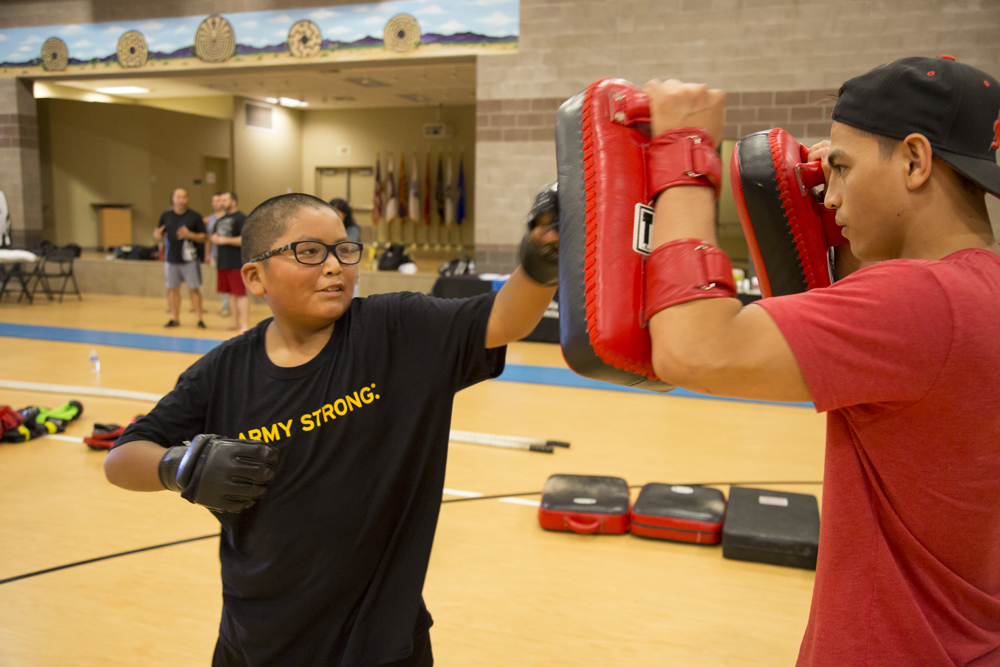 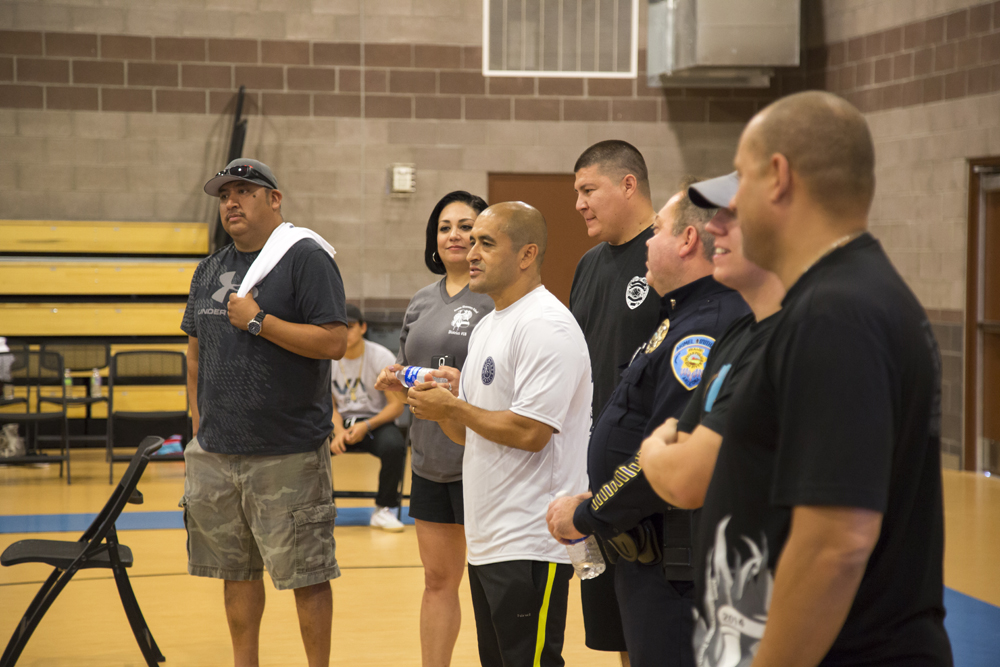 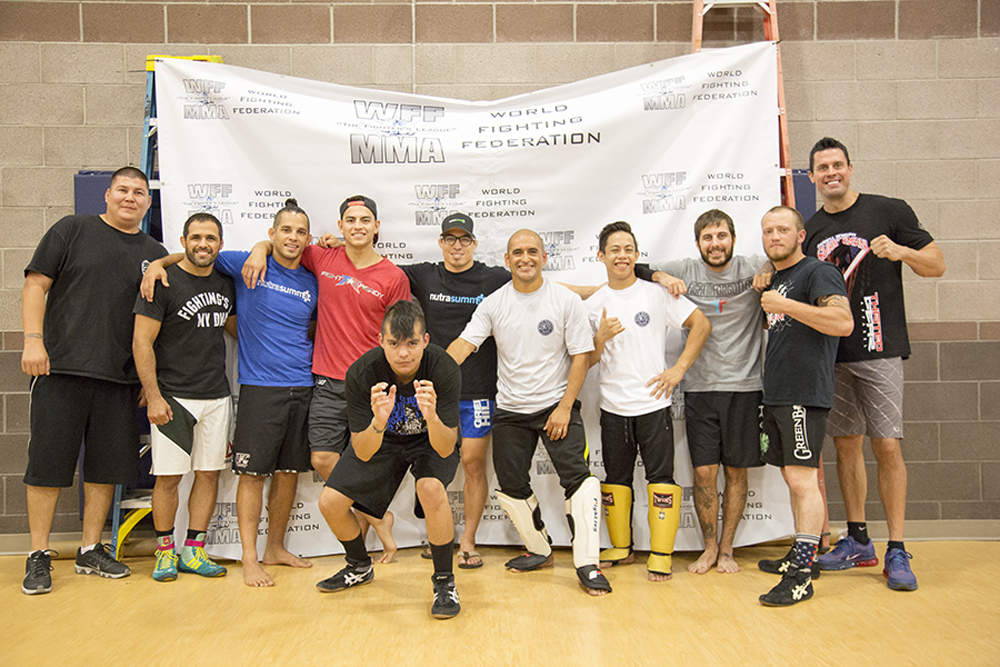 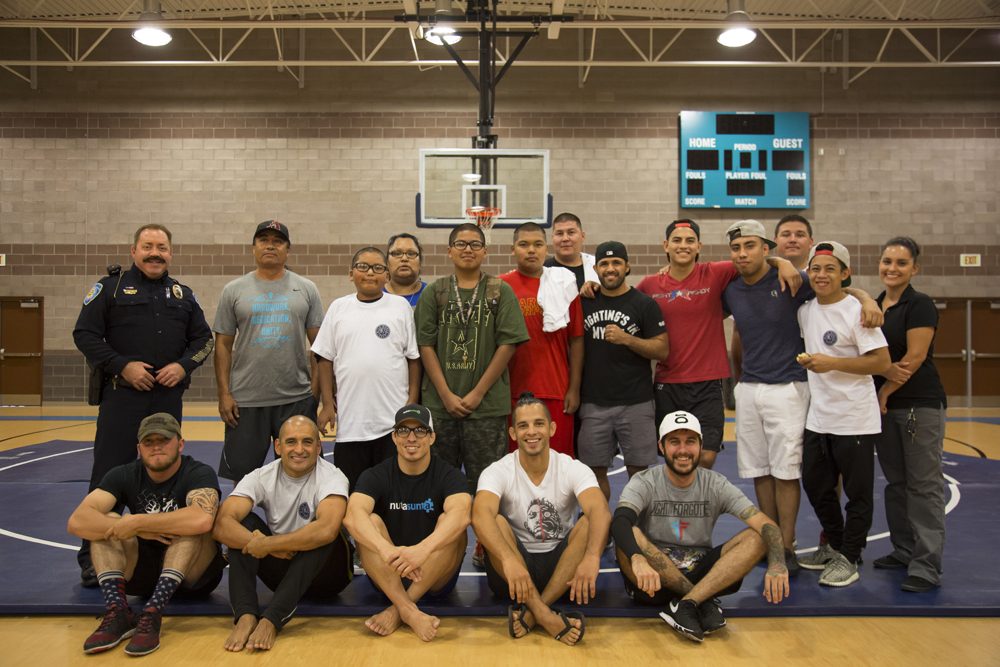