Ranger Mariano Conley has been with the Gila River Police Department for more than 14 years, and in that time has proven his hard work and dedication to the Gila River Indian Community.

Last month, he was awarded the Conservation Officer of the Year award by the Native American Fish & Wildlife Association. But, he said, his work is always made worthwhile because of the team of people that he and the GRPD Rangers work with.

“There’s a slew of people the Rangers get to work with. It’s just such an incredible profession,” he said, and listed just a few of the departments the Rangers work with, including the Department of Environmental Quality, the Land Use Planning and Zoning Office, the Gila River Fire Department, the Bureau of Indian Affairs, the Cultural Resources Management Program, the Tribal Historic Preservation Office, the Department of Public Works, Animal Control, and many other entities.

“All these departments work together,” he said. “We have one common goal, and that’s to serve the public – to protect the land, the water, and the people, as well as the culture.”

He said the successes and sustained conservation efforts in the Gila River Indian Community are due to the combined work of all the different divisions within the GRPD, as well as the various GRIC departments. “As far as accomplishments, it’s one big accomplishment because we work as a team.”

As a Ranger, Conley spends a lot of time in the rural areas of the Community and has occasion to witness some rare wildlife. He’s seen mountain lions, bobcats, even deer in the Estrella Mountains.

Conley grew up in Gila Bend, and is familiar with the O’otham land, language and culture, which is part of why he loves his job, he said. “I understand the importance of a small community.”

Ranger Conley works closely with the Department of Environmental Quality. In fact, it was the DEQ Director Ondrea Barber who nominated him for the award.

In her nomination letter, she wrote, “Ranger Conley’s knowledge about wild animals and habitat and his interest in protecting and educating the public about the Community’s natural resources are the foundation of his impact as a conservation officer.”

Conley said one of his favorite parts of the job is interacting with Community members and youth to teach them about Arizona wildlife at Community events.

“For example,” said Barber, “in 2008, he initiated Community fishing clinics [and] he has facilitated games to teach young people how to cast a fishing rod.” He also teaches the youth to identify different fish by their unique markings.

He said, “If they’re able to identify the fish [in the game], it helps them identify when they go off the Community, like, ‘oh that’s a catfish or that’s a trout.’ And they’ve already got the handle for casting a rod and reel.”

Conley and DEQ are working with a number of other departments on a solar well that is meant to provide water for the Community’s wild horses and other wild animals, while diverting them away from more populated, dangerous areas.

Barber said, “He responds to wildlife emergencies, and volunteers to monitor GRIC’s resident wildlife species. Ranger Conley loves the job he is doing and ensures that conservation efforts are regularly performed by Ranger personnel for the betterment of the Community.” 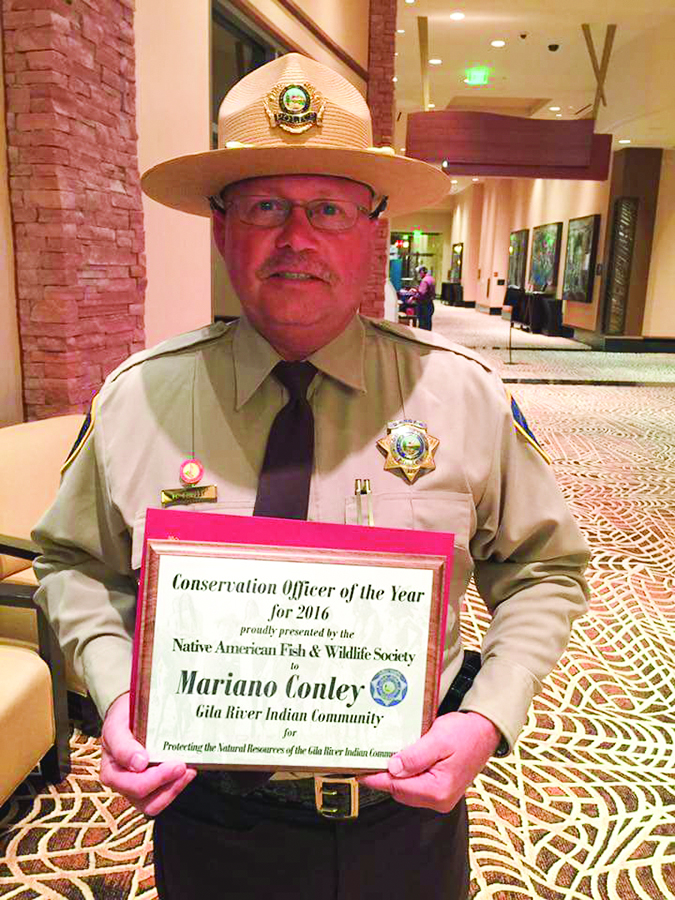