When it comes to graffiti, the Gila River Police Department isn’t laying off those who wish to vandalize public property and homes.

Recently the GRPD Graffiti Abatement Team was out in District 2 to supervise community service related to vandalizing public property.

“Back in 2011 the Community Council saw there was a problem with graffiti in the districts and [they] wanted to get a program started that would be able to suppress graffiti and deter everything that was going on in GRIC that was gang-related,” said Graffiti Abatement Technician Todd Tate.

He said more and more people are calling the police about graffiti in the Community.

Tate and Brokeshoulder agreed that although graffiti may appear harmless, it does reflect negatively on the appearance and safety of the Community.

When the GAT was established, there wasn’t a handbook on how to crack down on graffiti, so Brokeshoulder and Tate experience was crucial to defining policies and procedures.

Tate said, “[We] wanted to make the Community, the elders and the kids feel safe…especially for visitors from outside of the Community, because you want them to feel welcome.”

He said that appearances can say a lot, that’s why it’s important to clean up the graffiti.

To the average individual, graffiti appears all the same, but the GAT is able to determine if it is the work of an individual or a gang marking their territory.

The team aims to reduce the amount of graffiti in the Community through the use of a database and other police resources to help convict or deter individuals.

Over the years their database has grown to keep up with the latest trends in gang markings and symbols, which can prove useful to officers during an investigation.

“They’re doing different stuff with tagging. They are changing up their game all the time,” said Brokshoulder.

“One of the most important things that [GRPD] can do is build a paper trail…you’ll have the documentation and information ready when the officers are investigating certain crimes,” said Brokeshoulder

“We work a lot with [our] officers, because it gives us more opportunities to go out [there] to conduct investigations and follow-ups to fill out reports,” said Tate.

Although the GAT primarily works to deter and cover up graffiti, they supervise individuals doing community service for other crimes.

Brokeshoulder said, “Periodically me and Todd will try to talk to the individuals about how [you] are going to change your life…how to funnel [that] energy through some other way, instead of getting in trouble.”

So far the program has been able to deter individuals from committing the same crime again. Putting in a days work painting over graffiti or cutting down weeds, not to mention paying a stiff fine are some of the reasons why crime doesn’t pay. 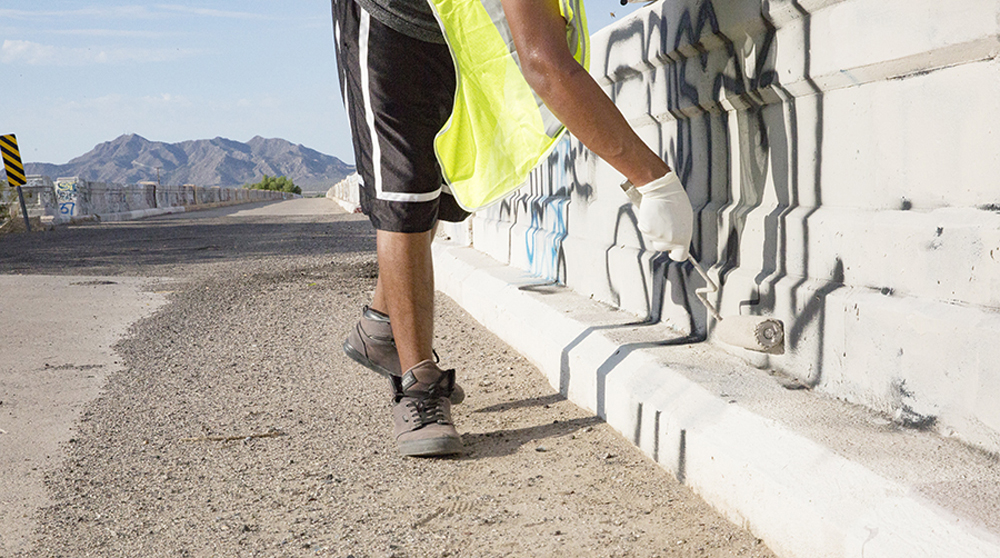