GRIC among tribes who support the Gila National Monument

An initiative to preserve over 84,296 acres of land near the town of Gila Bend has got the attention of 13 Arizona tribal communities.

Arizona Congressman Raúl Grijalva of Legislative District 3 is proposing a bill that would place land located in Maricopa and Yuma counties under the Bureau of Land Management to be designated a national monument.

Grijalva announced House Resolution 5556 at a press conference at the Inter-Tribal Council of Arizona in downtown Phoenix on Aug. 29.

Several tribal leaders in attendance expressed their support for the bill.

Among them was Gila River Indian Community Lt. Gov. Monica Antone, who is part of Grijalva’s effort to get the bill passed.

The Community supports the bill because the Huhugam, who once settled in the area have ancestral ties to the land, along with other O'otham tribes.

Lt. Gov. Antone said, "The effort to protect the lands of the Great Bend of the Gila demonstrates how Native Americans can come together on land that is sacred. That's [our] history, our ancestors, our vessel to our bloodlines."

On June 22, Grijalva introduced the bill into the House of Representatives, which referred the bill to the Committee on Natural Resources.

If the bill passes, it would create the Great Bend of the Gila National Monument and also place it under the National Landscape Conservation System.

The job of the NLCS is to protect and restore cultural resources, species and ecosystems that are present in the area.

As an Arizona native, Grijalva’s said he appreciates strong ties between the land and the indigenous peoples.

"I thank Congressman Grijalva for being here because with our travels to Washington D.C. with the O'otham sister tribes [we] have done a lot of lobbying to keep this effort going," said Antone.

Grijalva said, "I'm very fortunate to be around in this time where the role of Native Americans in the functioning of our public lands and in the general political landscape of our country has changed dramatically."

He said that the influence of Native people on preserving sacred sites, cultural resources and historic preservation is vital to the decisions that are made in Washington D.C., as outlined in H.R. 5556.

Archaeology Southwest President and CEO Bill Doelle provided an overview of the archaeological study conducted at the proposed site.

Doelle said, “We are here to celebrate the release of the ethnographic report on the Great Bend of the Gila National Monument proposal.”

He said they were able to provide extensive documentation that justify making the area a National Monument.

The DRA Collective press release stated that the area is considered culturally rich, and is dotted by petroglyphs and geoglyphs and the remnants of ancient settlements and trade routes.

Doelle said the study recognizes the importance of the landscape by incorporating the input of tribal communities and the centuries old existence of settlement by the Huhugam and Patayan peoples.

In addition to the ancestral connection, the study discovered that it was used as a trade and travel route for groups of people traveling across Arizona.

At the press conference, Grijalva said the support of 13 tribal communities is important to protect land that may be at risk of destruction if not brought under federal status.

Antone said the bill is way to honor and respect the ancient remains of the Community’s ancestors who have an influence on GRIC’s cultural teachings and practices done today. 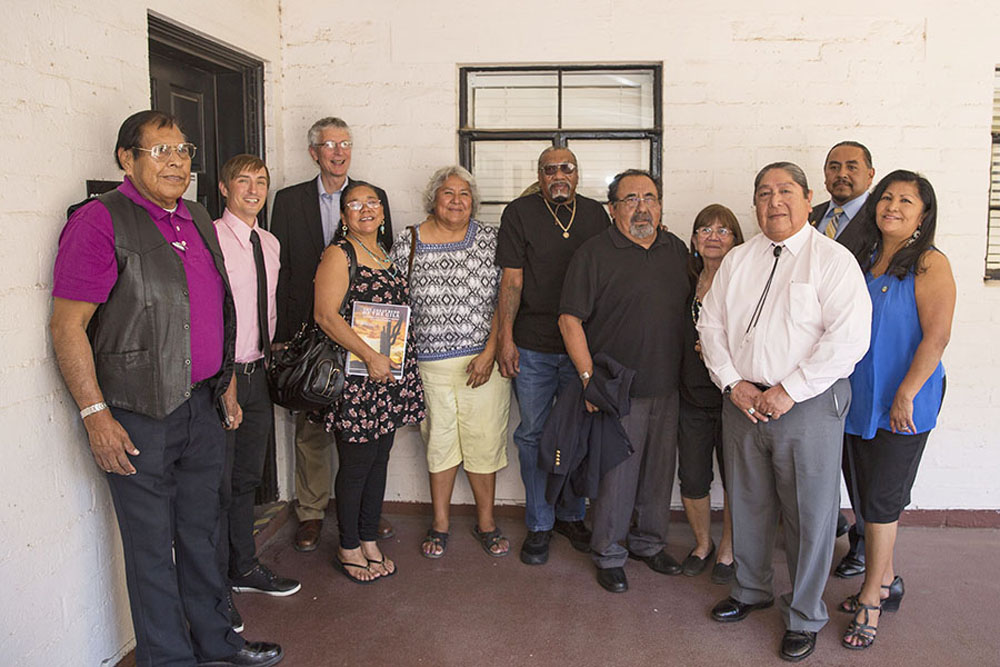 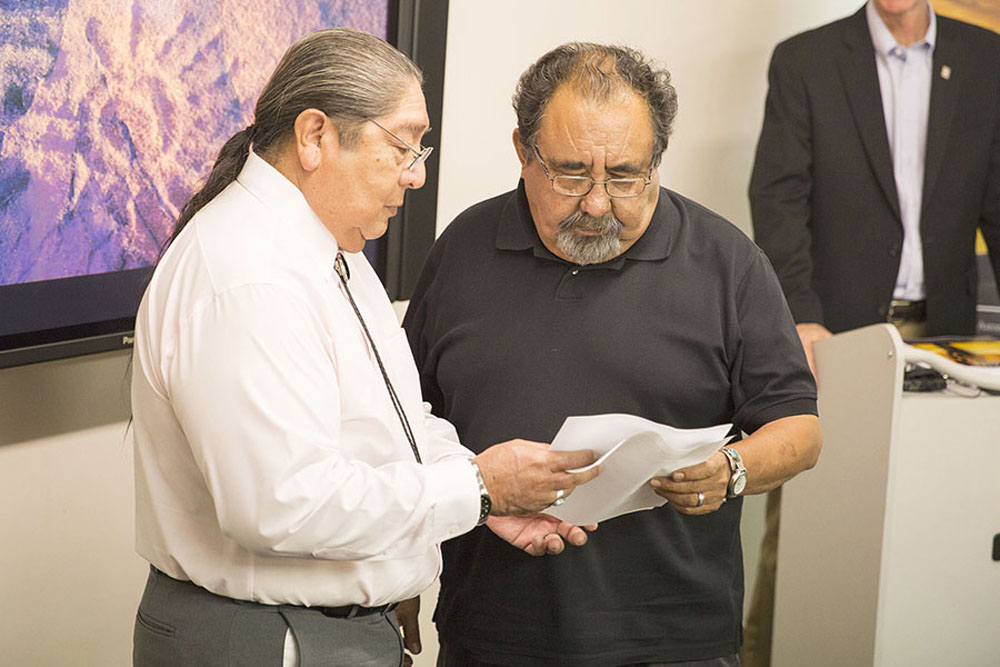 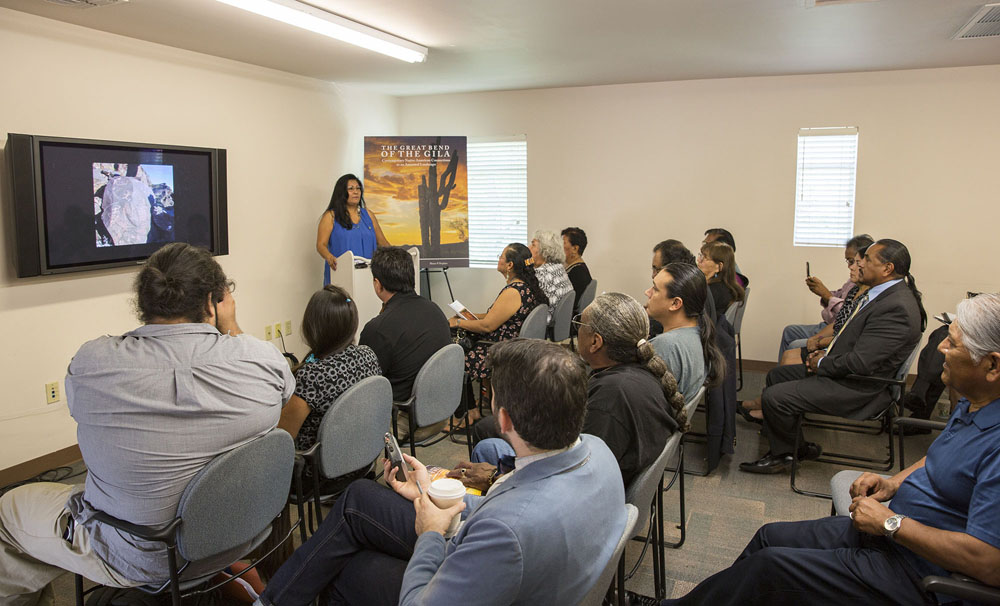 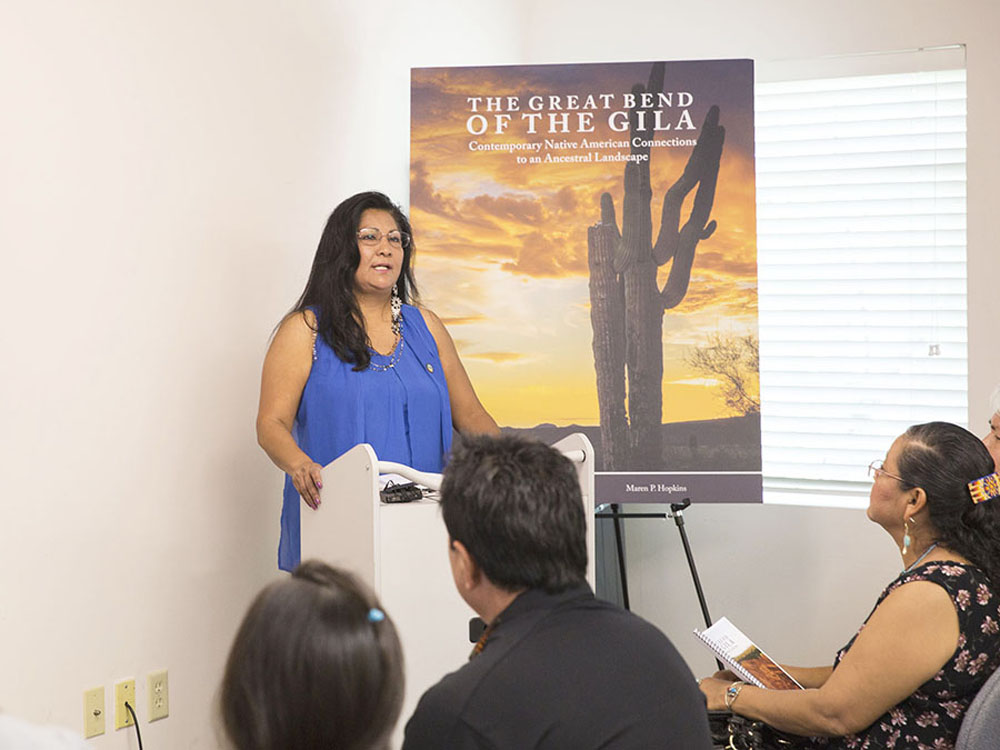