GRIN Articles > What Time is it?

What Time is it?

Learning numbers and how to count in O’otham is one of the first lessons that are taught to learners, whether they’re learning at home or in school.

Knowing how to say the numbers in O’otham is very important as we use numbers everywhere. We use numbers when we count items or measure things around us. We also use numbers to keep track of the passing of time, whether it is the day, month, or year.

Every time we use numbers we have the opportunity to use the knowledge of our own O’otham ñeo’ok instead of the English numbers we’ve grown accustomed to.

One area where we can incorporate O’otham numbers in our daily lives is with telling time. A common question that is often asked by people of all ages is “What time is it?”.

Now, the hourly concept of time that we presently use is relatively new for our Community and is based on a European idea of the day divided into 24 hours. This idea was brought to our lands by Spanish and Mexican visitors starting in the late 17th Century.

Prior to this date, the traditional concept of the day (thash) was more loosely divided into a few periods that corresponded primarily to morning (sialig) afternoon (tha:m juk), evening (huduñig) and night (chu:g). The Spanish influence on our Community can be heard in the words that we now use to tell time.

There are a number of different ways in O’otham to ask the question “What time is it?” The easiest way is by using the question phrase Sha:chuḍ o:la?, which literally translates as “What hour is it?”.

Another way of asking the same question is by saying “He’ekia o ‘i him? which literally asks “How many (hours) are going (by)?”. You might sometimes hear people say the same phrase as “He’ekia ‘o vai him?”.

All of these questions are different ways of asking the same thing and are understood by speakers. The difference on which form a speaker will actually use in a conversation can be based on his or her preference or on their dialect and it is important to pay attention and ask people in your area how they would ask the question “What time is it?”

Replying to the questions is relatively simple and uses your knowledge of numbers. For example, if you wanted to say that it’s one o’clock you can simple reply to one of the questions above with “hemako o:la”, which literally says “one hour” or “one o’clock”. If you wanted to be a little more proper in your responses you can also say “Tho hemako o:la” meaning “it is one o’clock”. And if you wanted to emphasize that the hour has reached one you can use the phrase “E-ai ath heg ______” which is a way of saying that the clock has reached a certain point of the day. To complete this example you would use E-ai ‘ath heg hemako o:la, meaning the time has reached one ‘o clock in the day.

For example, if you wanted to say that the time is 8:05 you would say “Tho hethasp minu:thi ‘i ba’ivch heg gi’igik o:la” or it’s five minutes past eight o’clock. In a similar way if you wanted to say the time is 8:07 you can say “Tho vevkam minu:thi ‘i ba’ivch heg gi’igik o:la”. But on the other hand if the time was 7:55 you would have to think of how many minutes there are left until the next hour.

Telling time in O’otham takes practice and a little time to get used to the system. But it is a good way to bring more O’otham into your daily life and utilize your knowledge of numbers. We encourage you to start asking each other “Sha:chuḍ o:la?/He’ekia ‘o ‘i him?” and figuring out how to say the time using O’otham.

This month’s word match will give some good practice on how to say the time in O’otham. 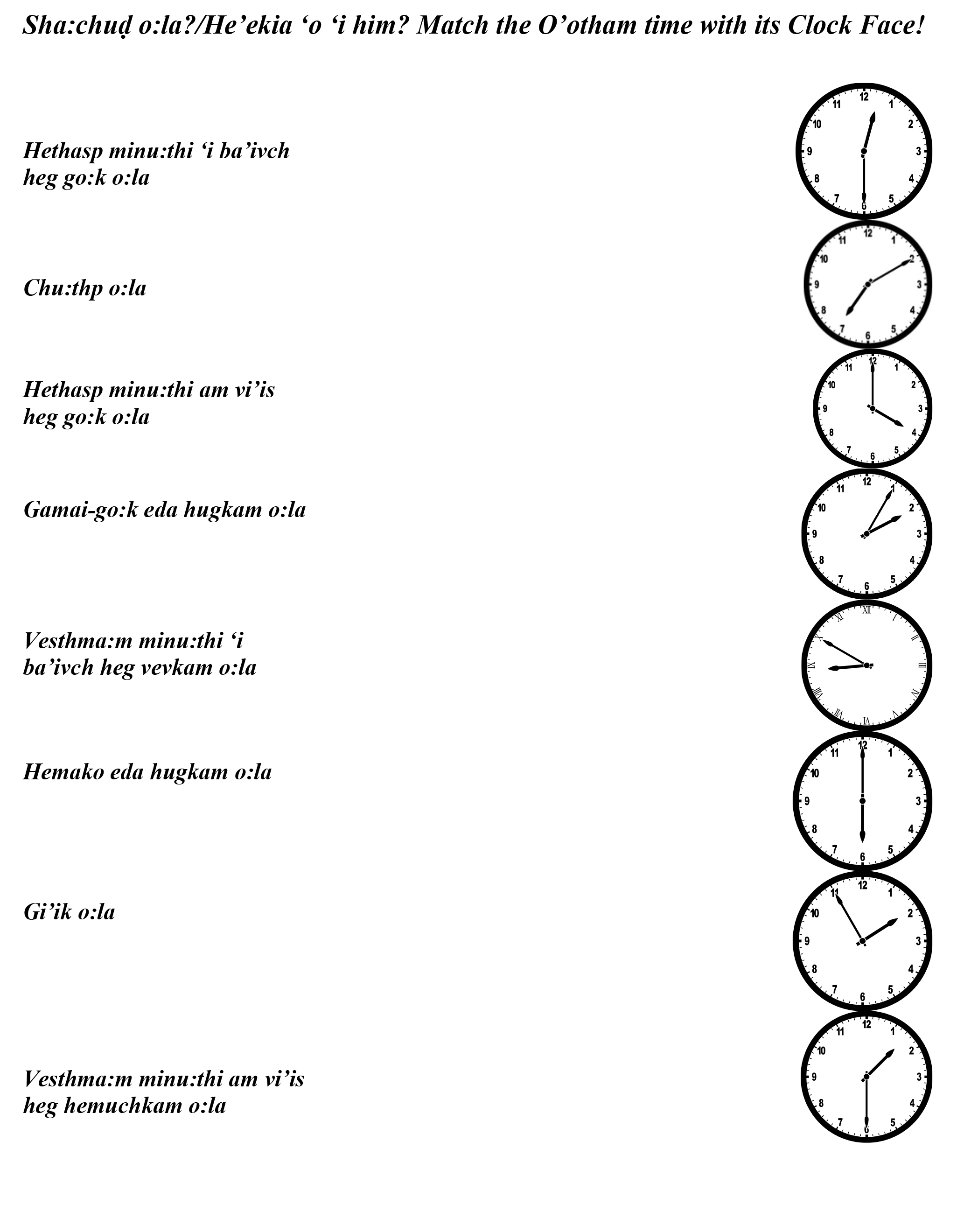 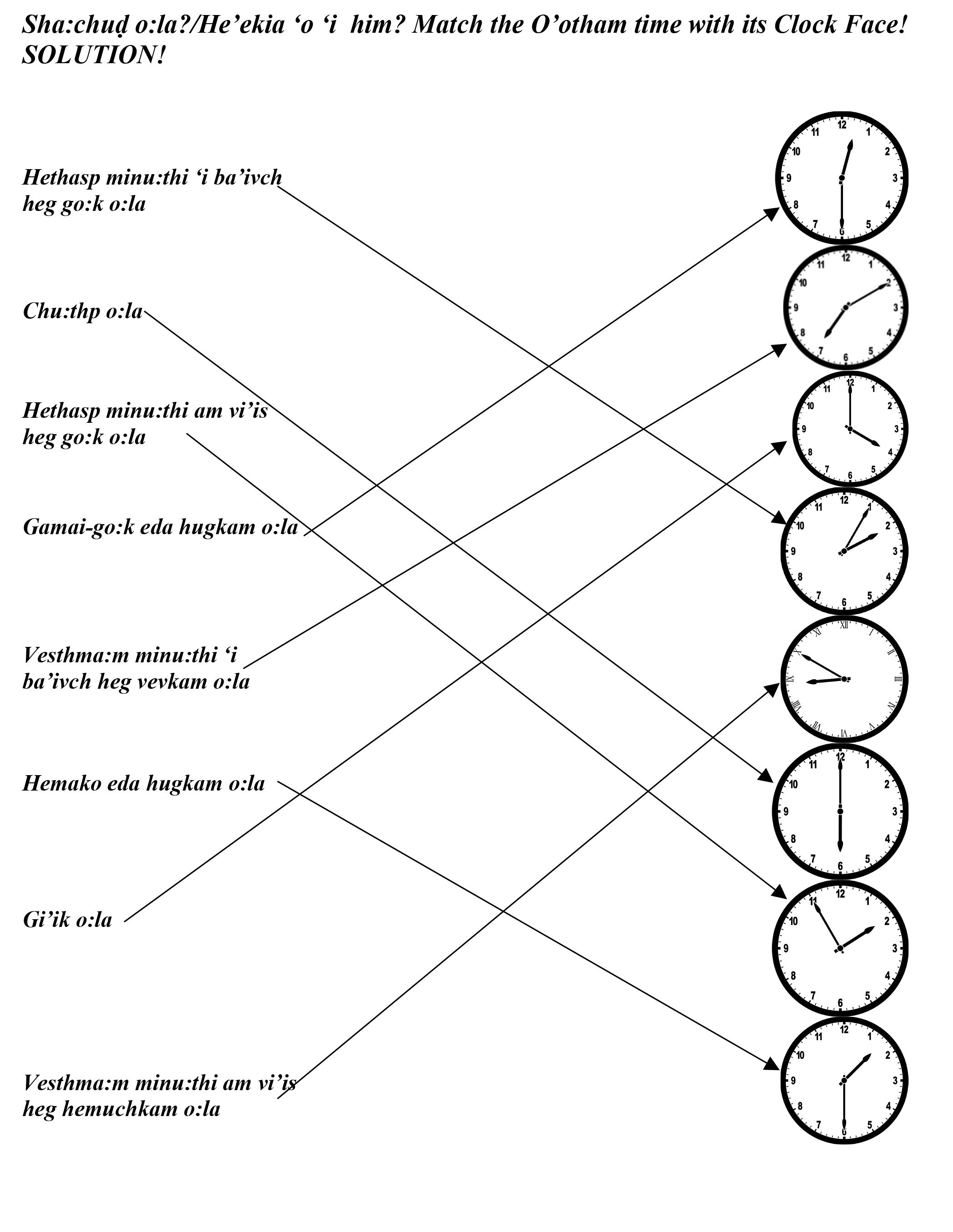