Carrying prayers and good thoughts across the land, the O’otham Unity Run traversed the historically inhabited lands of the Akimel O’otham and Tohono O’otham from the Salt River Pima-Maricopa Indian Community, through the Gila River Valley, toward the Baboquivari Mountains, across the international border, and into an O’otham village in Mexico.

District 1, Blackwater, hosted a camp for the runners and provided wood for a fire and an evening meal with traditional singers in honor of their journey. District 1 also provided breakfast in the morning as they made the rest of the run. The runners stopped briefly for lunch in Vah Ki’s District 5 ballpark on Monday, March 13.

Runners pray for unity of the O’otham people and for the land and water they share. Many runners carry personal prayers for health and family in their hearts, and others simply enjoy the family-like atmosphere of spending a few days in nature with fellow O’otham.

“Most people pray for their families and the water and the land,” said one elder from Blackwater in the Gila River Indian Community.

Runners preferred to remain anonymous, stating that the purpose of the run is not to seek personal attention, but to remain focused on their mission.

“Meeting all these people, it’s good,” said one gentleman from San Tan in the Gila River Indian Community. “They’re good people to be around. You don’t have to be afraid of nobody out here.

Everybody’s just like your friend, like you’ve known them for a long time, even though you [haven’t].” He and his children like to do the Unity Run together.

A lot of the runners enjoy having young children on the run. One young lady from Salt River said, “It’s nice seeing the kids jump in and out of the vans and meeting all the kids.”

She said, “I came last year and it felt good to be here, so I wanted to come back. [It’s nice] to be around people that we don’t know, but we’re all the same people.” She and her friend, also from Salt River, like getting to know people on the run and get prayers and good experiences out of it.

She said she prays for unity of the people on the run.

Runners tend to come back year after year. One gentleman said he has done it every year for the past 11 years. “I started in ‘06 and I’ve been with them ever since,” he said. But there are also new participants every year. “Every year it’s different. We have new runners, new drivers. It changes, but it has the same meaning, for all the tribes to get together and be friends with one another. That’s what I see it as.” He said he looks forward to the Unity Run every year because it helps him to de-stress and enjoy time with others. 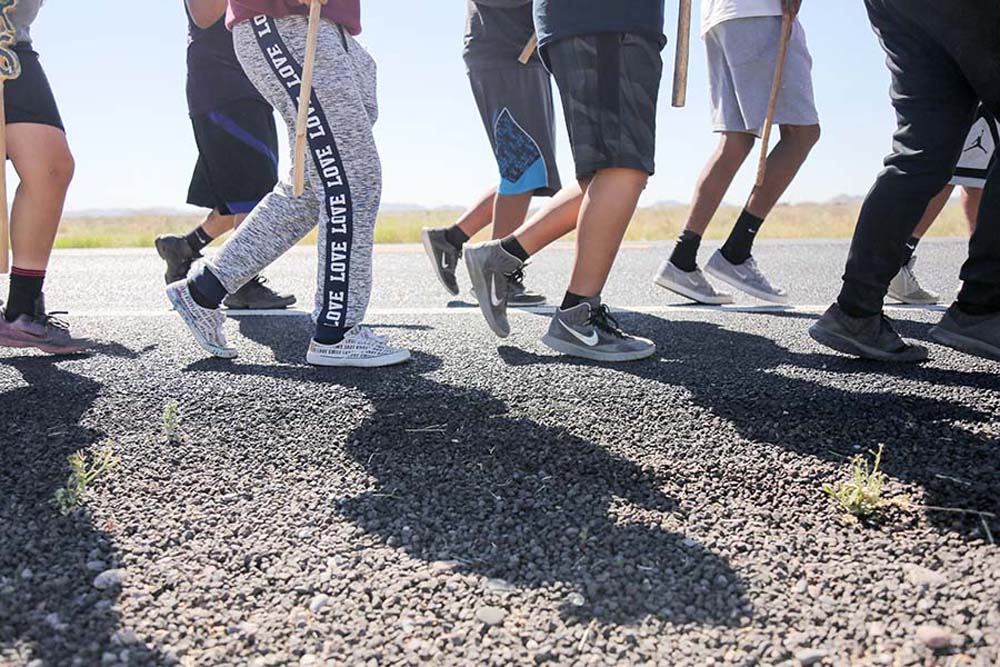