Gov. Stephen Roe Lewis awarded two Community veterans for their service across the Gila River Indian Community on behalf of the President of the United States.

“Today is a special day and opportunity to recognize you two for helping your fellow veterans, your brother and sister veterans. I just want to thank you,” said Gov. Lewis.

Wesley Rhodes and Darrell Whitman, who both served with AmeriCorps, received the   Presidential Lifetime Achievement award on Nov. 22.

Program Evaluator Leonard Bruce with the Office of the Community Manager said, “One of the reasons Darrell and Wesley are receiving the award is because of the tremendous amount of hours and service they have shown through the AmeriCorps Program.”

He said the two have been instrumental in providing mentorship to  new AmeriCorps  members, organizing community veterans events, and bringing service men and women together.

Gov. Lewis read a letter of appreciation from the President of the United States, that lauded both of them for their volunteer service and commitment to the Community.

“You have assured the continuation of America’s unparalleled commitment to improving the lives of others. You have served as a mode of the American spirit,” said the letter.

The letter also stated the award is the nation’s show of appreciation for those, “who give so willingly of themselves and their lives for the benefit of others.” Whitman and Rhodes are no stranger to giving their time and talents for others. Whitman is a veteran of the US Army and Rhodes is a veteran of the Marine Corps.

Gov. Lewis said Whitman and Rhodes have demonstrated some of the highest qualities of leadership in helping build the AmeriCorps program into a prime example of serving veterans within a tribal community.

Bruce said the recognition comes with another bit of extra news about what Whitman and Rhodes will be doing over the foreseeable future.

“One of the reasons it is also a special occasion is because they have been chosen as Peer Support Specialists for the new Veteran & Family Service Office, based on the three years of service that they have contributed to the advancement of veterans and their families,” he said.

Bruce explained, as Peer Support Specialists, Whitman and Rhodes knowledge and connections with Community veterans will help to build the VFSO into a great foundation for future services and resources to serve Veterans and their families.

Gov. Lewis in response to the success of AmeriCorps praised the work of Employment & Training Director, Lana Chanda and former AmeriCorps Coordinator, Leonard Bruce for developing the program and the implementation of the grant that was awarded to the Community three years ago. With AmeriCorps receiving another 3-year grant, and members now serving with the Veterans & Family Service Office, Gila River can anticipate continued support for veterans and their families for many years to come.

In closing, Governor Lewis declared “What we have is an important duty to serve our veterans and bring services to them that will greatly benefit them and their families.”

Darrell Whitman served in the U.S. Army from 2006-2010 with the 82nd Airborne Division and served two tours of duty during Iraqi Freedom campaigns. Wesley Rhodes served in the United States Marine Corps from 1979 to 1982 and was assigned to a Marine helicopter squadron based out Jacksonville North Carolina and out of Norfolk Virginia.

Rhodes was deployed aboard naval vessels as part of recovery efforts of service personnel during times of conflict.

Whitman said despite receiving the award, he and Rhodes are still keeping busy doing what needs to be done for the AmeriCorps program and Veterans and Family Services department.

Rhodes said, “We were doing what needed to be done, talking with veterans and getting to know their history and listening to the stories that they have to say.”

“Over the last three years the work that we have put into the program has gotten us to where we are now.”

Whitman said awards are a great way of showing how well the program has come, but attributed the accomplishment to other program members, who are equally deserving of praise.

“We did not come into this program looking for an award. It was the participation of everyone gathering information from the veterans and trying to get people to make a positive impact on their lives and the Community,” said Whitman. 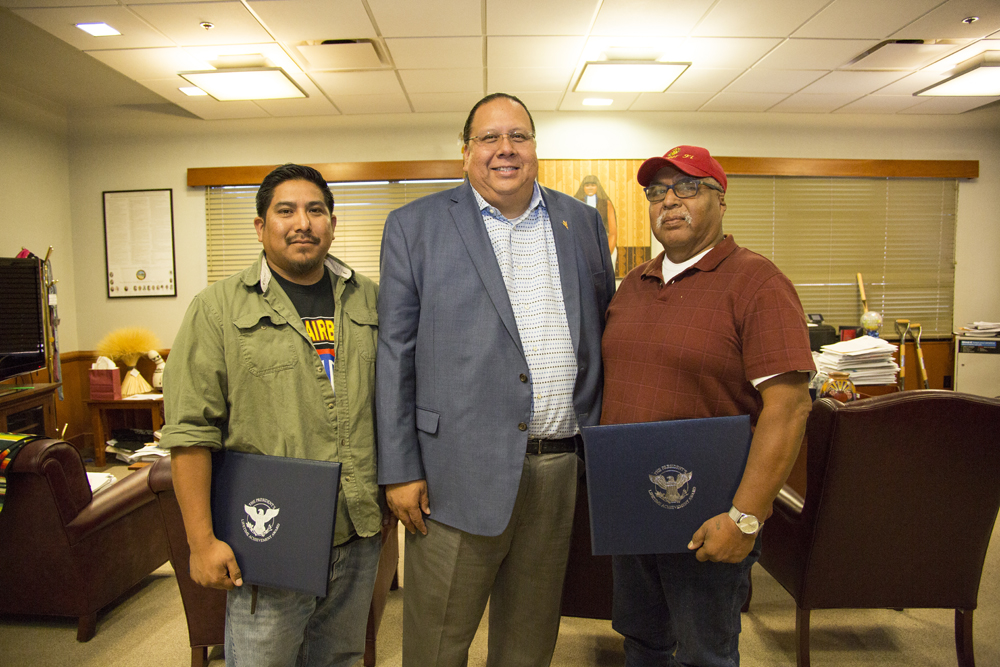 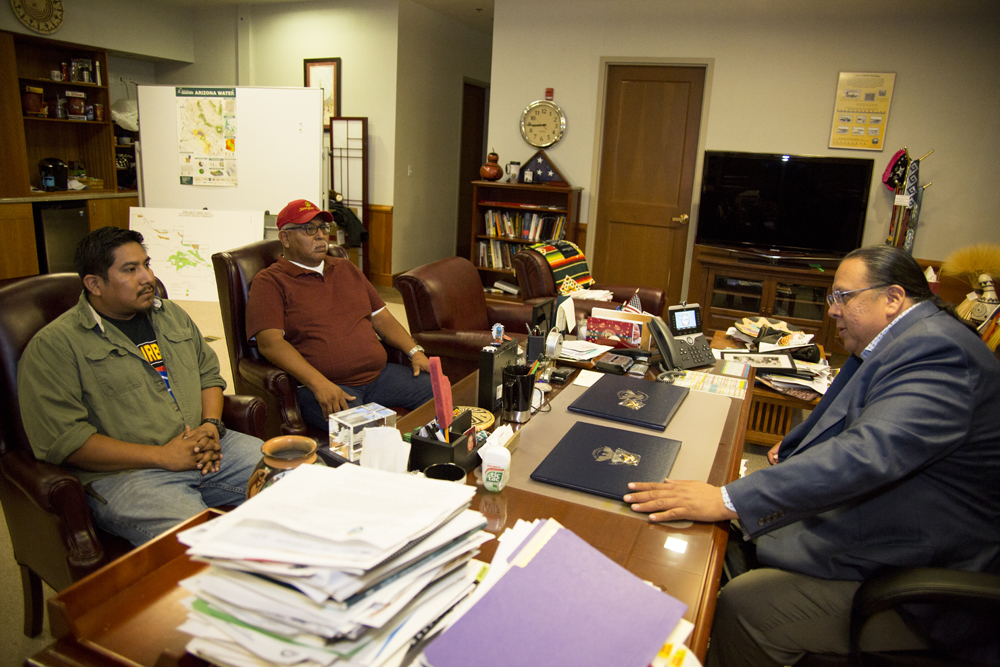 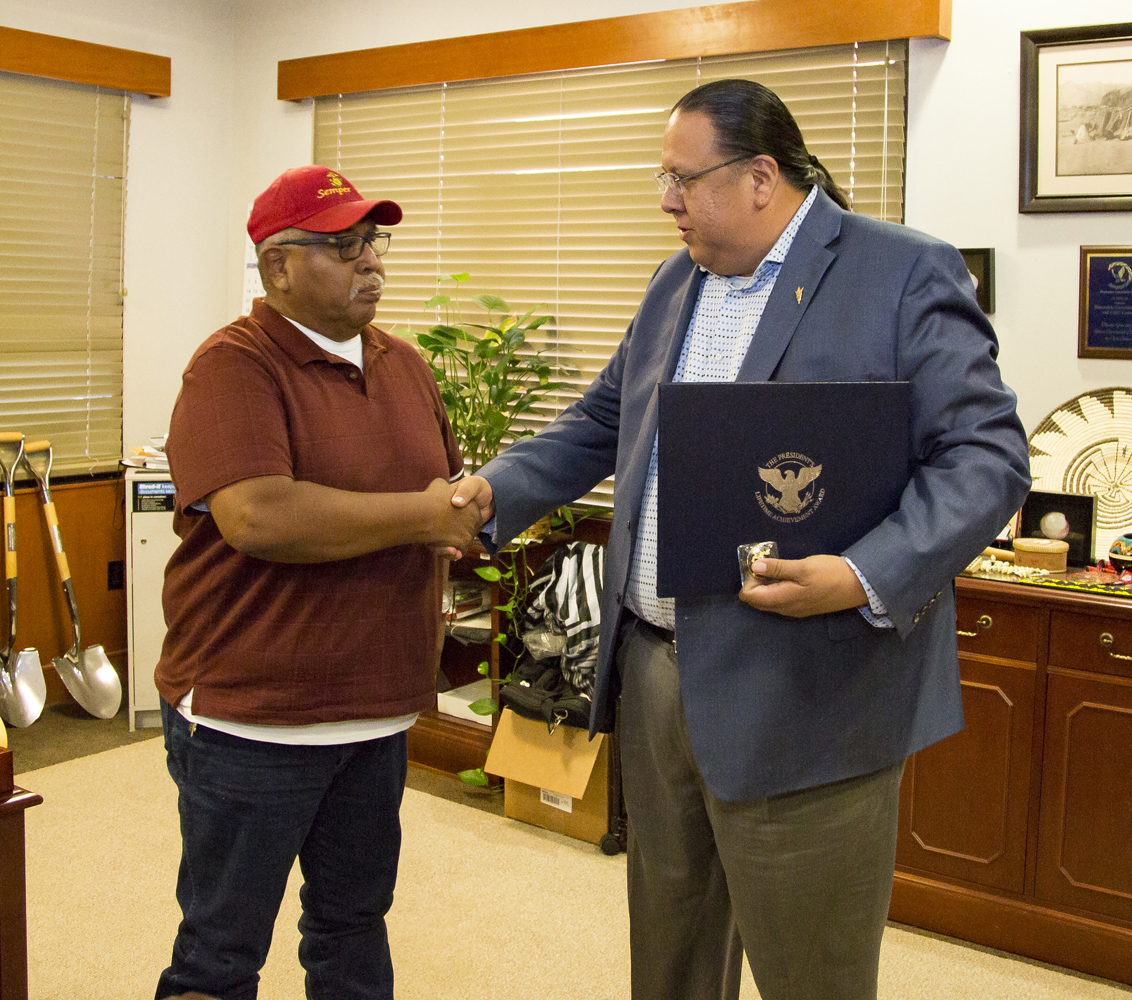 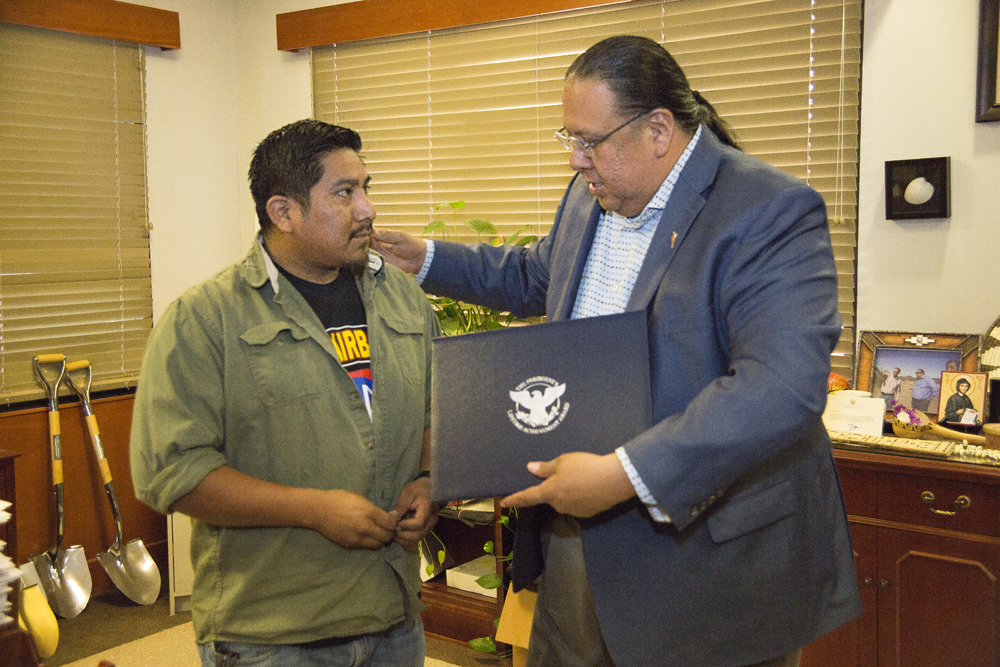