The Gila River Indian Community commemorated their historic Water Rights Settlement with a community celebration at the Mul-Chu-Tha Fairgrounds on Dec. 9, a day before the official holiday.

December 10 has been made an official GRIC holiday to honor the Arizona Water Settlements Act, which was signed by former President George W. Bush in 2004.

“We are all connected to our water, our shu:dag,” Gov. Stephen Roe Lewis said during his opening remarks. “I was taught that we stand on the shoulders of the leaders and elders who have gone before us. It’s been over 13 years since the ratification of the Arizona water settlement. It’s due to the past leaders that we are here celebrating.”

“All of the O’otham tribes understand the importance of our shu:dag,” said Gov. Lewis. “Ak-Chin and Salt River were one of the first ones to regain their water rights and set the standard for all water rights since then, so we really thank them for their presence being here and celebrating our annual water rights celebration.”

The day began with the posting of the colors by Haskell Osife-Antone Post #51 followed by the singing of the national anthem in both traditional O’otham, by St. Peter Mission students, and in English by Devin Pablo.

Councilman Stone offered a traditional blessing before the O’otham singers and runners arrived with a gourd filled with water that was collected from the Gila River at the Managed Aquifer Recharge 5 site. After each runner shook hands with Gov. Lewis, he proceeded with his opening speech.

“After over 100 years of fighting we have finally got our water rights back,” Gov. Lewis said. “But still in this changing time, we see challenges to our water. It is important that each and everyone one of us start to learn about our water history. We start to teach our children in the schools. This is an ongoing reverence for what we hold as sacred. That is why we are here today. That is why we are here celebrating the return of our water but also we are recommitting ourselves to the struggle.”

Following the Governor, the audience was presented a video that went over the history and struggle of the Gila River Indian Community’s fight to regain their water rights. The video featured speeches from former Governors and Lt. Governors from the inaugural Water Rights celebration. As well as outlining the community’s water plan to maintain and use the water from the Central Arizona Project to farm the land, like the Huhugam ancestors.

Following the video presentation, David DeJong, Pima-Maricopa Irrigation Project (P-MIP) Director, gave a speech connecting the history of the water rights struggle to the present and the future. DeJong also went into the history of the P-MIP development after the settlement.

“P-IMP is helping the community put its water, hard-earned water, that Governor mentioned was a fight that took more than 100 years to bring back, to beneficial use,” DeJong said. “The challenge always remained that non-tribal water users continued to use water that rightfully and legally belonged to (the Gila River Indian Community).”

DeJong discussed the Akimel O’otham and Pee Posh history of farming and then diversions that caused the community droughts. He also discussed failed irrigation projects that was supposed to bring water back to the community. At the hearing for the Central Arizona Project, former Governor David Johnson attended to let it be known that the Gila River Indian Community was interested in water from that project. GRIC has always been present in the CAP from the very beginning.

Recently, the Pima canal was completed a few years ago and is a state-of-the-art canal system that brings water to the community. GRIC is the first tribal nation to put a canal system under tribal control. In 2016, the Casa Blanca canal started construction, which is important because the 16-mile long canal will be the backbone of the community canal system.

DeJong discussed future projects of P-MIP to bring more than just an irrigation system to the community. The goal is more than economic profits for the community, it’s to use water in a way that is culturally meaningful but also to restore the natural agriculture.

Also, giving a youth perspective of the Water Rights Settlement was Miss Gila River, Anissa Garcia, who was accompanied by Jr. Miss Gila River, Haili Gonzales. Garcia urged her peers to pursue an education in fields that would benefit the community’s continued protection and beneficial use of the water rights settlement.

Gifts were presented to former Governors and other leadership, who helped with the pursuit of the water rights settlement as well as key dignitaries from the sister O’odham tribes.

A lunch was provided to those in attendance and traditional dancing took place before Gov. Lewis gave the closing remarks to end the day’s celebration. 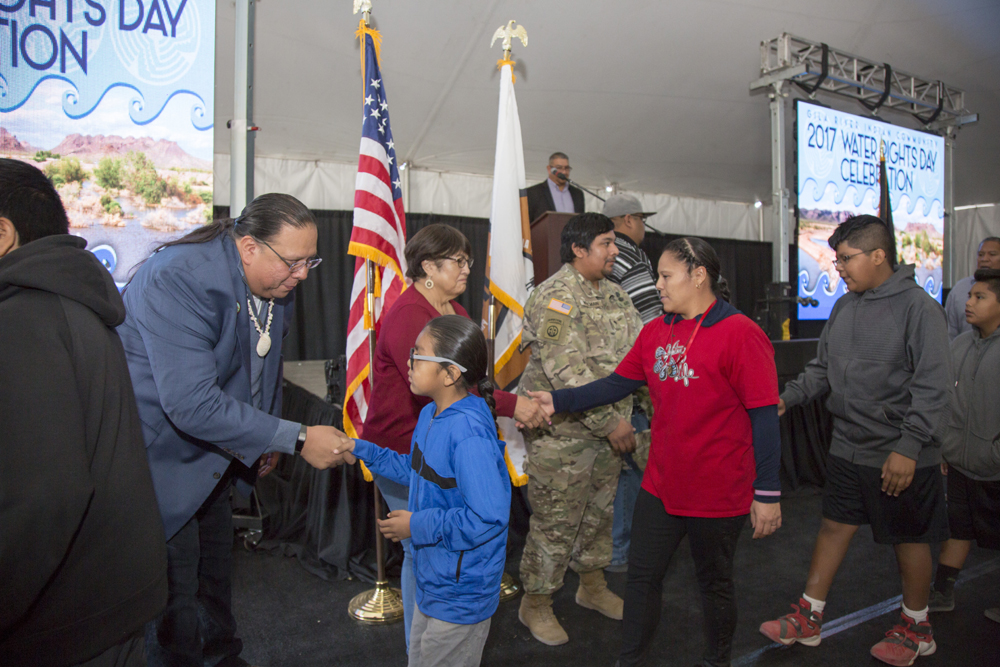 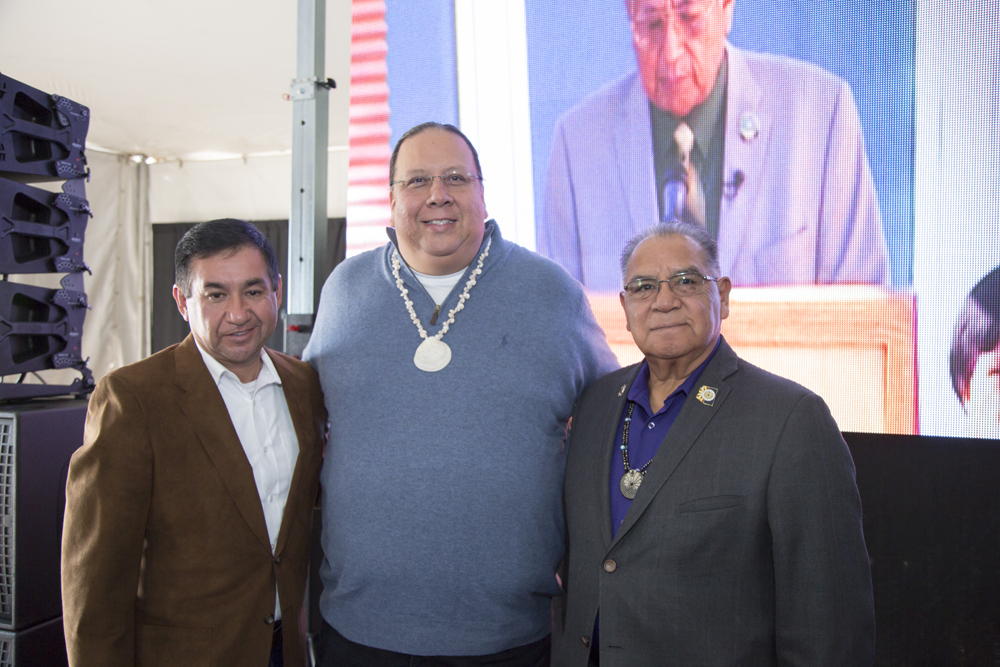 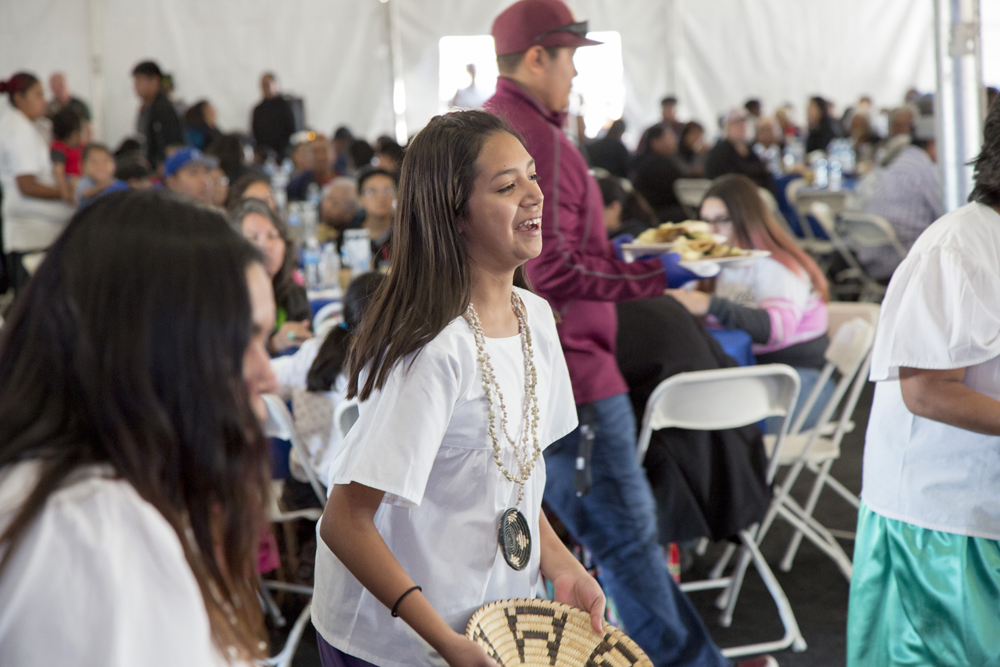