Veterans came out to recognize to the nations symbol of patriotism and sacrifice at a special ceremony at the Community’s cultural center.

On a chilly morning at the Huhugam Heritage Center, veterans mustered in to salute and pay tribute to service men and women, who gave their lives 76 years ago on December 7, 1941 during the attack on Pearl Harbor at a special flag breathing ceremony on Dec. 6.

This was the first time a piece of living history was brought to the Community with the help of many of the Community’s veteran groups and associations, who steadfast in bringing the Pearl Harbor memorial flag to the Community.

For the past two weeks the flag has made its way through each of the Community’s districts for members and veterans to view before it returned back to the Huhugam Ki museum on the Salt-River Pima Maricopa Indian Community.

Ira H. Hayes Post 84 Commander Chesley Juan Jr., said, “We are here to honor the flag and all of those, who lost their lives on December 7, 1941 aboard the USS Arizona BB-39.”

He said there were many to thank for making the ceremony possible to honor the over 1,177 sailors and Marines, who lost their lives and some of those who are entombed in the steel hulk of the submerged USS Arizona at Pearl Harbor on the Island of Honolulu, Hawaii.

Gila River Indian Community Gov. Stephen Roe Lewis said it is a true honor to recognize the many service men and women, who gave the ultimate sacrifice at Pearl Harbor.

“[This] flag is a symbol of freedom and a symbol of all Native Americans, who have served in the highest percentages of any people of the United States. Most of all it is a symbol of the sacrifices and blood that was shed to preserve our freedoms during the attacks on Pearl Harbor,” said Lewis.

He said the USS Arizona memorial at Pearl Harbor Hawaii is a sacred place and solemn place that serves as a reminder of the sacrifices made, but of those who went off to war and never returned.

“We all have our family history of sacrifice, of our veterans serving. My family is no different,” Lewis said recounting the military service of his great uncle United States Marine Corps Lance Cpl., Richard Lewis, who was killed in action in the Marshal Islands of the Pacific Theater during WWII.

Gov. Lewis said it’s about remembering and being proud of the rich military history of families in the Community for seeing their relatives off to war and sharing that story with future generations, so that they may not forget the courageous actions of those individuals.

American Legion Post 114 “Bushmasters,” Commander Darrell Hills, said through a series of requests the post was able to receive the flag in coordination with the National Parks Service at the memorial site in 2007.

“It hits you...there’s a feeling there that you know they’re there greeting you,” said Hill, “We gave a salute to all of the service members that lost their lives on the USS Arizona, those 1,177 that gave their lives.”

He said a special tribute was given to those that perished from the attack aboard the USS Arizona and then retrieved the flag from a group of Pearl Harbor survivors, which was taken back to SRPMIC.

After the guest speaker’s remarks it was time to unfold the remembrance flag, which was performed by members of the various veterans and public safety color guard members that were on hand to unfold the flag.

The flag would later be pointed in several directions and given a proper salute in a tribute to those that have given their lives to defend the nation and for those that are currently serving in harm’s way.

“To have this flag brought to the Gila River Indian Community is a wonderful opportunity for the Community. Thomas Jackson was instrumental in helping bring this flag to the Community and is one of the few members at the Huhugam Ki museum that are responsible for taking care of this flag,” said Hill.

HHC Director Shirley Jackson said, “Caring for this flag has been an incredible experience for the staff and I. It has been a pleasure to work with the veteran’s groups as they were the ultimate planners and directors of what you see today.”

“It was at times a very moving experience. I like to thank all those veteran’s groups that took care of the flag and standing watch over it,” said Jackson.

She said at times it was a very solemn occasion as the flag went to each district.

“I would also like to thank the American Legion Post 114 Bushmasters of SRPMIC who are the recipients of this flag and allowing it to have it in Gila River this year,” said Jackson.

She said there were many to thank like the Huhugam Ki museum in SRPMIC and Gary Owens and the collections manager Thomas Jackson, who cares for the flag.

She said working with them has definitely solidified the HHC’s relationship with Huhugam Ki museum, which has also bolstered relationships with other O’otham museums on the Tohono O’odham Nation and Ak-Chin Indian Community.

Gov. Lewis said the event “Is another example of the heroism of our Community members, so again it’s an honor to stand before you to welcome you to begin this solemn, but also very important ceremony that we are marking, moving forward. We are moving forward to a better tomorrow as we never forget the history, the sacrifice of our veterans.” 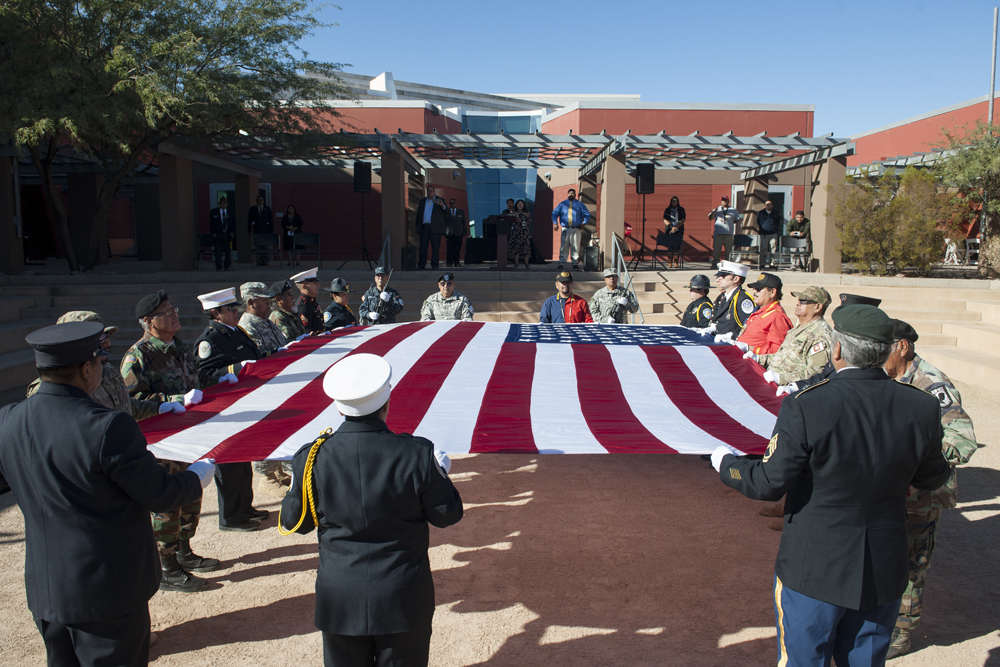 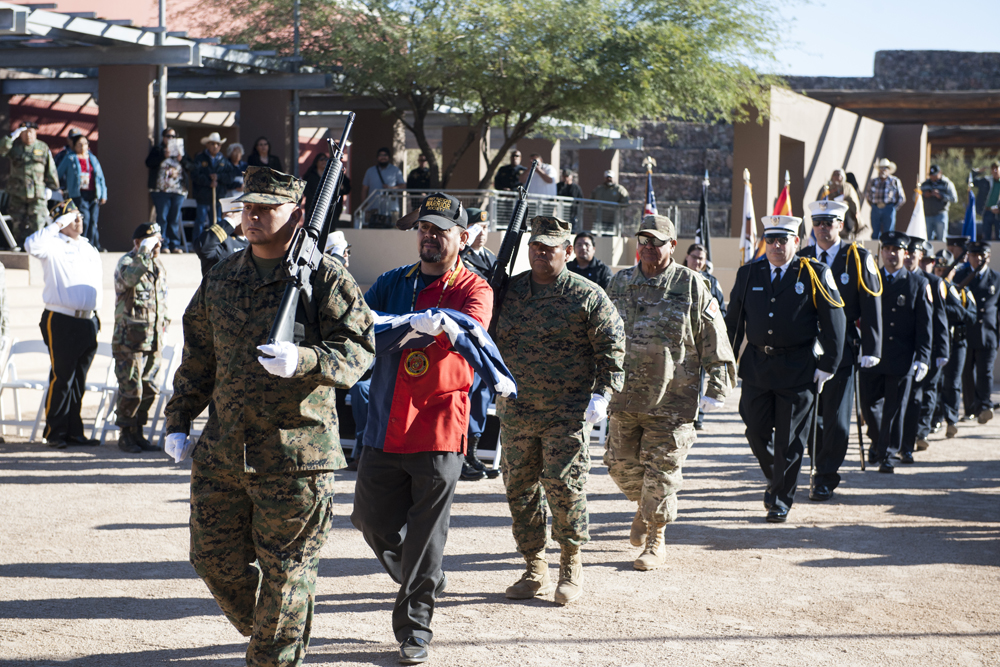 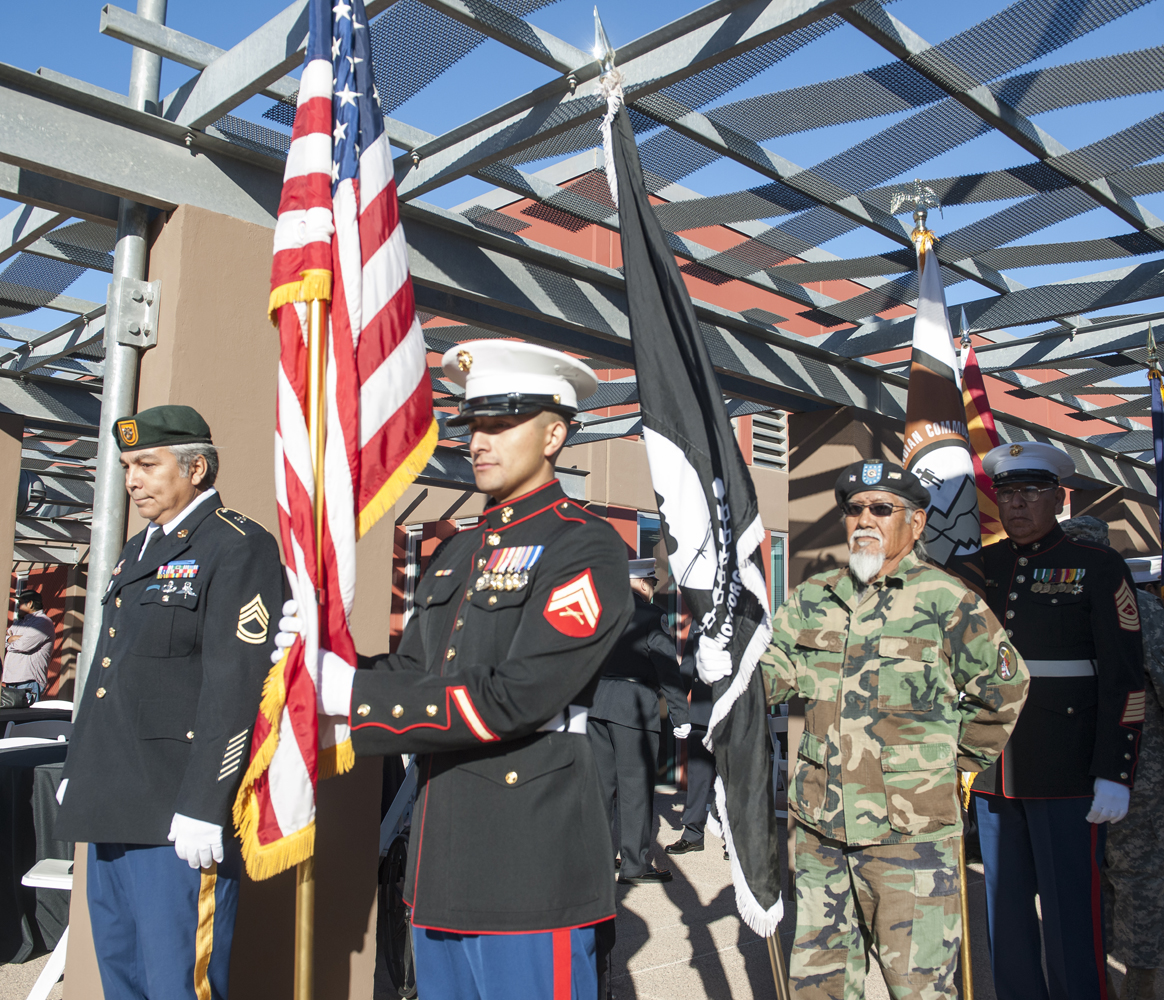 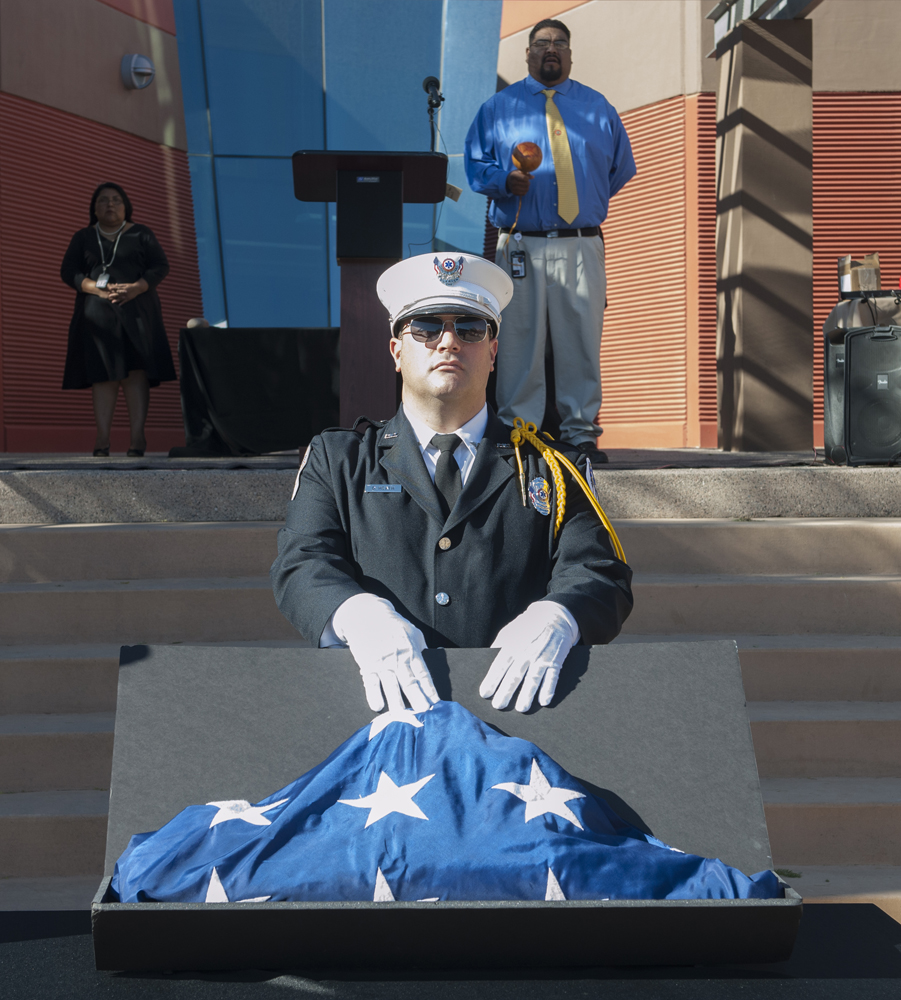