The red carpet was rolled out at Wild Horse Pass Hotel & Casino on Thursday night, Nov. 30 as the Arizona Diamondbacks recognized their corporate sponsors with the 7th annual D-Backs Most Valuable Partner Awards.

The Gila River Hotels and Casinos were up for two awards including the Ambassador Award and the MVP- Golden Glove Award. They ended up winning the coveted Golden Glove Award for their work in the community and also within the Diamondbacks organization.

“We are very proud and excited to host this event,” said Gila River Gaming Enterprises CEO, Kenneth Manuel. “This award is fantastic and demonstrates what we do not just for Gila River Gaming Enterprises (GRGE) but also highlights our partnership with the Arizona Diamondbacks. Partner means we work hand-in-hand in a lot of different endeavors. The advertising is impactful to our business and gets out our brand.”

“(Gila River Hotel and Casinos) is unbelievable and that is why you won the Golden Glove. You should be proud and we are too,” said Hall. “We are so proud of your history, tradition and heritage. We thank you for letting us host the Native American recognition game and also the inter-tribal tournament, it is the only one of its kind and to have so many kids from many states and tribes to come play here and then we get to share that with our fans.”

Gila River Hotel and Casinos has been a corporate partner of the Arizona Diamondbacks from the beginning of the organization’s founding, one of the 12 original partnerships. With the partnership, GRGE is able to maximize its advertising efforts, which this past season focused on the launch of the new rewards card for Gila River Casinos which included, digital signage at Chase Field, the LED rotator, e-blasts to the D-Back’s database, D-Back’s insider ads and having the D-Backs tagging Gila River Hotels and Casinos on social media.

“What makes it so special is the longevity of the partnership, we’ve been there since day one,” Manuel said when asked what makes the partnership special. “They’ve been a very active partner, not just with Gila River Gaming Enterprises, but with the Gila River Indian Community as well. Our kids from the Gila River Indian Community participate in clinics throughout the year and it’s something they are always going to remember and we are proud to be a part of that.”

The GRGE Public Relations Department coordinates three kid’s clinics for the Gila River Indian Community. One clinic is held at Chase Field while the other two are held in the community districts. Each clinic helps introduce the 100 participants to the game of baseball and teaches them the fundamentals as well as sportsmanship.

On hand to accept the award for GRGE was Manuel, Dominic Orozco, Corporate Vice-President of GRGE, David Baggerly, Director of Player Development and Cyndee Jorgensen, Corporate Media and Advertising Manager.

In the past, the GRGE has been awarded the Lifetime Achievement Award (2011) and a previous Golden Glove Award in 2013. 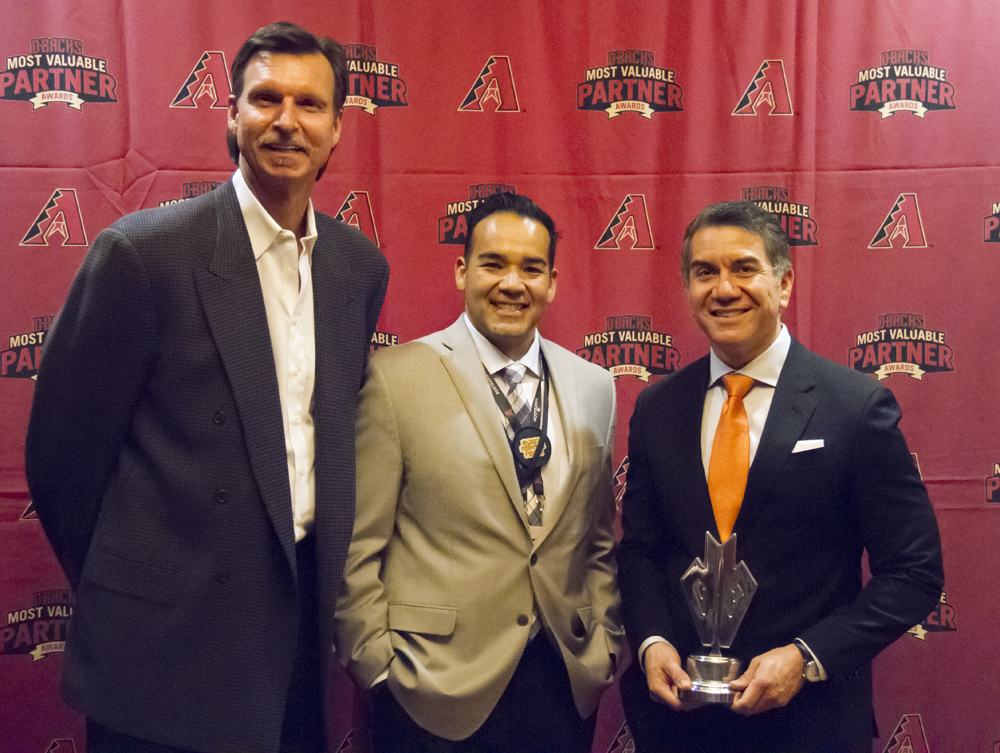