Seventy-two years ago the island of Iwo Jima was the scene of a massive and grueling battle between the United States and the Empire of Japan from Feb. 18 – March 26, 1945.

Over 110,000 United State’s soldiers, including the U.S. Marine Corps, Navy corpsmen, and the United States Air Force invaded the small rocky island, beginning a five-week battle. When the smoke cleared and the U.S. flag was raised in victory over Mount Suribachi, 6,821 U.S. servicemen and over 18,000 soldiers of Imperial Japanese Army had lost their lives.

In honor of the U.S. servicemen who died during the Battle of Iwo Jima, Ira H. Hayes American Legion Post No. 84 is hosting the 72nd Anniversary Iwo Jima Flag Raising on Feb. 25 in Sacaton, Ariz.

The event will include a parade, a fly over by a B-17 Flying Fortress and a Boeing Stearman Model 75, special guest speakers, a hot lunch, and powwow.

Post 84 Event Coordinator, Oscar Urrea, said the annual event attracts veterans groups from all around the U.S. with crowds sometimes growing to over 1,500 people.

Urrea added that the parade, which has around 100 entries, will begin around 8:30 a.m. starting at Skill Center Road. The parade will then head east down Casa Blanca Road and end at the Matthew B. Juan - Ira H. Hayes Veterans Memorial Park.

“Once at the park we have a massing of colors,” said Urrea. “That means all the different veterans groups come in together in front of the memorial, [and] they take group photos.”

After the massing of colors, guest speakers will present on stage around 10:30 a.m., shortly followed by a lunch served around noon.

Urrea said that after guests are finished with lunch, they will be directed toward the Sacaton Fairground where the powwow will be held.

Post 84 Adjutant Tony McDaniel, said that there is a special invitation out to all World War II veterans, and that for more information email ihpost84@gilanet.net or call (520) 562-8484. 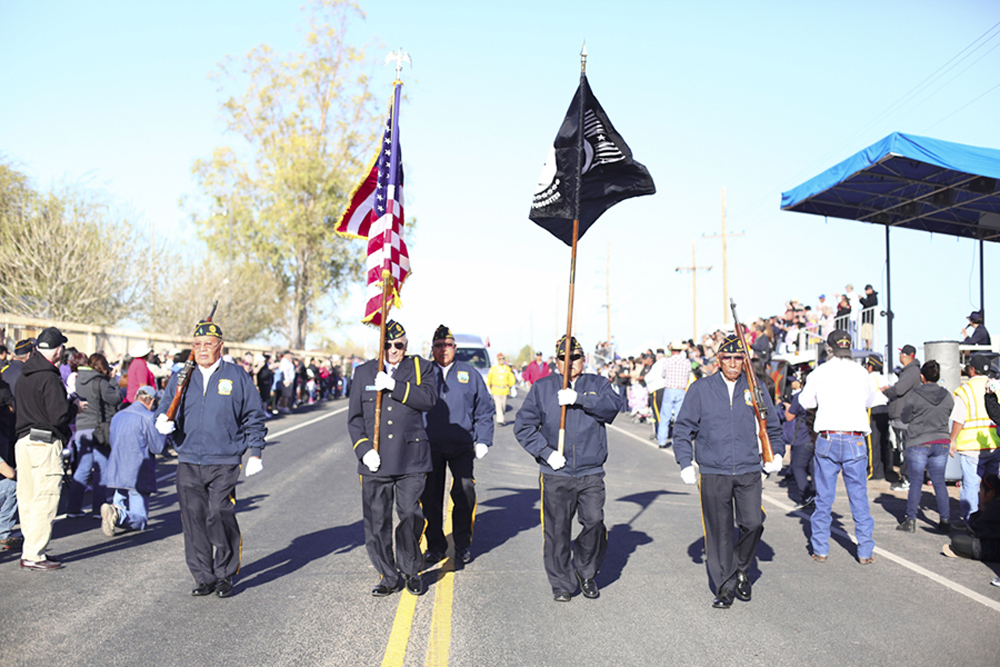