At the Inter-Tribal Council of Arizona building in Phoenix, Ariz., on Feb. 10, Gov. Stephen Roe Lewis and Lt. Gov. Monica Antone spoke with members of the Inter-Tribal Association of Arizona (ITAA) about the Community’s effort to halt the construction of the Loop 202.

ITAA passed a resolution to support efforts to stop the South Mountain freeway through the 9th Circuit Court of Appeals.

The Tohono O’odham Nation, which also has cultural connections to Moadag Doag, has filled an amicus brief, which is a series of documents outlining the issues related to the construction of the South Mountain freeway.

In addition to the amicus brief, an opening brief was submitted by the Community, which they expect to have a date in the court of appeals.

Gov. Lewis said whether it is from the state or federal governments, there needs to be a fair and respectful consultation process with tribal governments on issues that are important to them.

He said the Arizona Department of Transportation’s consultation process is faulty, because they did not take into account the Community’s religious freedom and the environmental impact the freeway will have on the area.

Lt. Gov. Antone said the construction of the Loop 202, it is devastating the cultural connections the O’otham have to South Mountain, which is used for traditional prayer runs and many traditional ceremonies.

She said, there were never consultations and in recent meetings the Army Corps of Engineers were notified of concerns of flood drainage on the Community land that will could cause harm the to environment, which is home to a variety of specifies of plants and animals.

Lewis said that the Community is currently consulting with the U.S. Army Corp of Engineers regarding the cultural and natural degradation of the area and will continue to seek litigation to prevent the construction of the Loop 202.

What this means across Indian Country?

He said the issue is part of the broader scope of what is happening across Indian Country.

“We are very concerned with how this new administration is not honoring the consultation process between the tribal nations and the federal government, which has a trust responsibility to work with tribes in [their] best interests,” said Lewis.

Many tribal leaders at the meeting support the Community and passed the resolution to reaffirm that all tribes stand united in protecting culturally significant lands at risk of devastation. 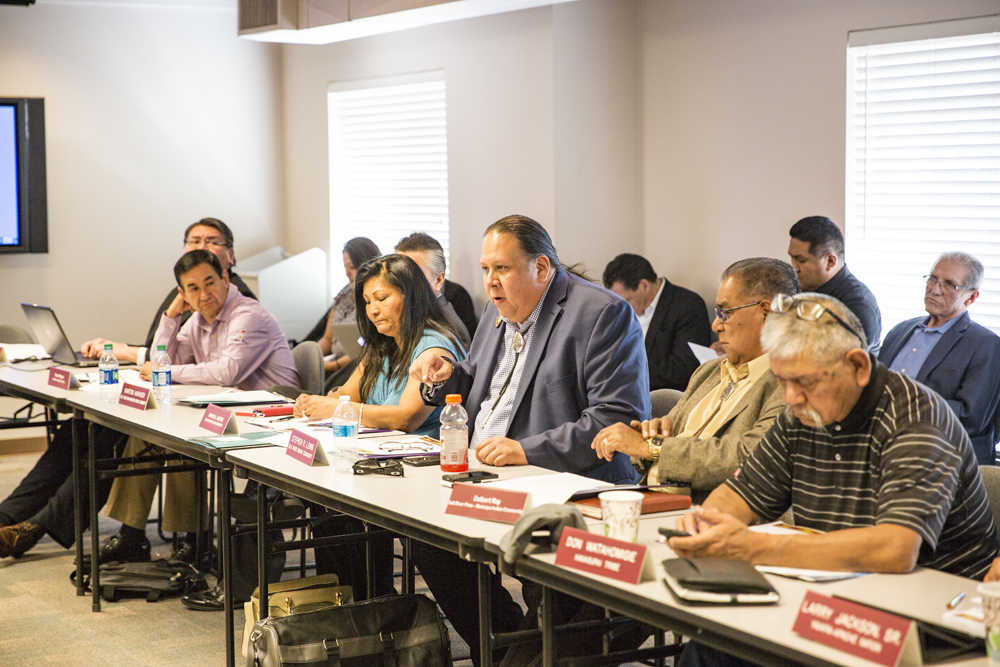