A common question that is often said amongst O’otham speakers is “Tho:ḍ hegai?”, which is a question that might be directed at you if you’re a newcomer or stranger amongst the group. This question literally asks “Who is he/she/that one?” and is the conversational version of the more formal phrase “Tho: ‘o vuḍ hegai?”

This question utilizes the O’otham word vuḍ which is often heard in O’otham conversations and has a specific purpose in O’otham sentences. In O’otham sentences vuḍ is used to link or identify two words (often nouns) as being one and the same. This can be seen in the following example sentences.

All four sentences above have the same form in that they each start off with a noun (Mateo) or pronoun (Añi, Hegai, A:pi), are followed by a form of the auxiliary (‘añ, ‘o, ‘ap), are then followed by the word vuḍ and end with a type of noun. What is interesting about all of these sentences is that there is no true verb in the form of an action word present in the sentence.

The auxiliary verb which is present (‘añ, ‘o, ‘ap) is only there to provide information about the subject and does not provide any information on the type of sentence. Vuḍ in these sentences expresses the idea that the subject (the first noun) is linked or identical with the predicate (the final noun).

You can think of vuḍ as being like an equals sign (=) in that it communicates the idea that the two nouns are one and the same (Añi=Akimel O’otham, Mateo=viappoi, hegai uvig=ba’ag). This type of word is called a copula and works similar to the word “be” in English.

In everyday conversation vuḍ shortens to ḍ and it is often this form that is used by speakers. The corresponding sentences from above would shorten to the following.

Although there is no change in meaning with these sentences you can imagine that it is harder to hear the word vuḍ in its shortened form. Even O’otham speakers may not (consciously) realize that the shortened form ḍ is the same word as vuḍ. This is especially true in commonly used phrases and questions (Tho: ḍ hegai? Sha:chuḍ i:tha?) where the ḍ sounds like it attaches to the closest word.

O’otham ñeo’ok is flexible and allows for different orderings of words without changing the basic meaning. This is true with sentences that use vuḍ. Another possible ordering for the sentences above is one where vuḍ appears at the beginning. It is actually this order that is commonly heard in casual conversations.

By this point you should be able to understand the word vuḍ and all its forms that it appears in. As you can see it is a very useful word when you want to identify someone or something to another person.

So the next time you hear the question “Tho: ḍ hegai?” you should be able to think of an answer using the word vuḍ. See some of the possible answers in the following puzzle. 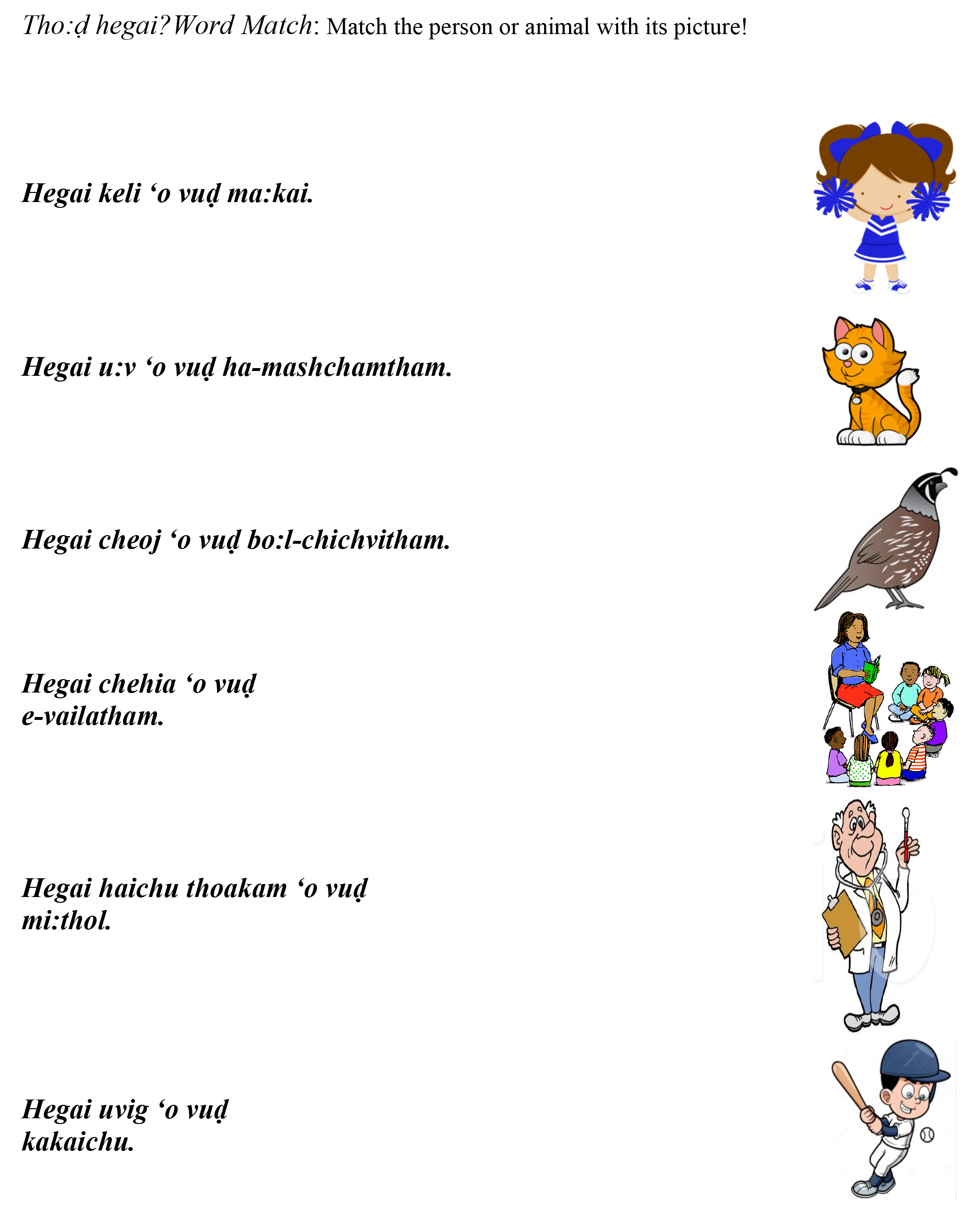