Pima cotton comes back to Community after two decades

While cotton has been a staple fiber used by mankind for thousands of years, there is a more modern and luxurious variation of the plant that stakes its birthplace within the Gila River Indian Community.

Pima cotton, or Supima cotton as it is also known, has been making a comeback at Gila River Farms (GRF) for the first time in over two decades with around 450 acres of the crop grown and harvested in 2015 and 900 acres in 2016.

The crop, which in some circles is called the cashmere of cotton, shares a history with the Community and has gained worldwide renown as being of high quality.

According to former GRF General Manager Tiffany Horne, the crop’s origins began in the Community almost 100 years ago.

She said the crop was originally developed by the United States Department of Agriculture on an experimental farm located in Sacaton during the early 1900s.

“It was previously called American Egyptian (cotton) and was developed here in the desert. The name Pima cotton was given to honor the community here,” she said.

While it has been a long time since the fields of GRF have grown Pima cotton, it is not the first time the farm has delved into the luxury cotton market.

“Gila River Farms grew Pima cotton until from the [late 1960’s to the 1980’s] and then discontinued production due to costs and commodity prices,” said Horne.

Over the next 25 years no Pima cotton was grown at GRF, but was brought back to the farms in 2015 in an effort to diversify the farm’s crop mix.

“We brought it back…to try it out to see if we could grow it here again,” she said. “And it did really well last year so we decided to put a majority of our cotton acreage into Pima for 2016.”

Pima cotton is considered to be a luxury item and is in high demand overseas, where almost all of the harvested fiber will be shipped.

“What we grow here is Supima, which is a combination of the term superior and Pima,” said Horne. “The Supima cotton that is grown here in the United States is considered to be the highest quality cotton in the world.”

The 2016 crop, which was twice the size of 2015’s harvest that produced just under 600,000 pounds of Pima cotton, did well, and according to Horne, was reported to be of a high quality, meaning a premium return on their harvest of just over 1 million pounds of Pima cotton.

Horne said domestic demand for Pima cotton was up in 2016 from last year and markets for the extra-long staple cotton are typically 50 percent higher than the upland cotton primarily grown in GRF over the past two decades.

From the ground to your t-shirt, how it’s made

From planting to picking, the process of growing Pima cotton, harvesting, ginning, milling, and eventual production into apparel, is a long and complicated process that is fraught with the ups and downs of international politics, volatile market prices, and the will of the weather.

“If the weather is great, we like to start planting at the end of March,” said Horne.

“We have to wait until the soil temperature reaches a certain level before we can put the seeds in so it will germinate properly.”

In 2015 and 2016, the weather was hotter and lasted longer than on average, said Horne, meaning that the date of the harvest for the past two years was a little later than usual. She added that they were able to estimate the harvest date and future yield of both crops by measuring accumulated thermal unit data gathered by weather stations in the area.

“We try and use some more scientific data,” she said. “Agriculture is becoming more [data driven]. You really have to use that data in order to be…somewhat profitable or successful because there is just no margin for error.”

After the cotton is planted the crop begins a long 9-month growing season, which is more expensive than upland cotton due to higher water usage, pesticide and herbicide costs, and growth regulators to inhibit the plant from growing too tall.

Once the cotton is ready to be picked, an agricultural aircraft sprays a defoliant, essentially a sodium mixture, that removes the plant’s leaves making it easier for cotton harvester machines to pick the cotton bolls.

The harvester machines drive through the cotton crops separating the lint from the plant and then take their loads to a nearby module builder, a machine that mashes the cotton down forming compacted blocks of cotton, which will then be picked up by trucks and taken to River Co-Op Gin in Coolidge, AZ.

The gin separates the cotton from the seed and is packaged into bales. From there, most of the cotton is sent to cotton buyers who then sell the product overseas.

“Ninety-five percent of it will be shipped overseas to Japan, Korea,” said Horne.

“They will take most if this into their spinning mills and then turn it in to yarn. [They will] either send that yarn back to the United States to be put into textiles or …produce the textiles and ship them back here and we rebuy them.”

For the past two years GRF has grown some of the highest quality cotton in the world. So the next time you go shopping and pick up a Supima cotton t-shirt or pair of socks, there is chance that it was grown in the fields of Gila River Farms, right here, in the Gila River Indian Community.

*Interviews for this article were conducted at different times, from September through December 2016, as the Community’s Pima cotton was growing and harvested. 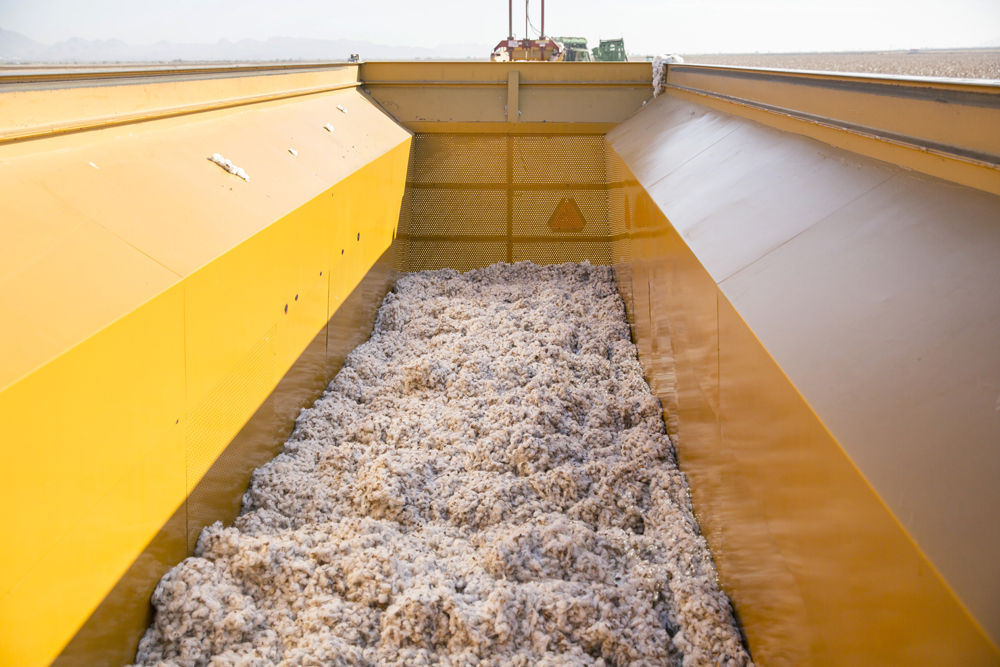 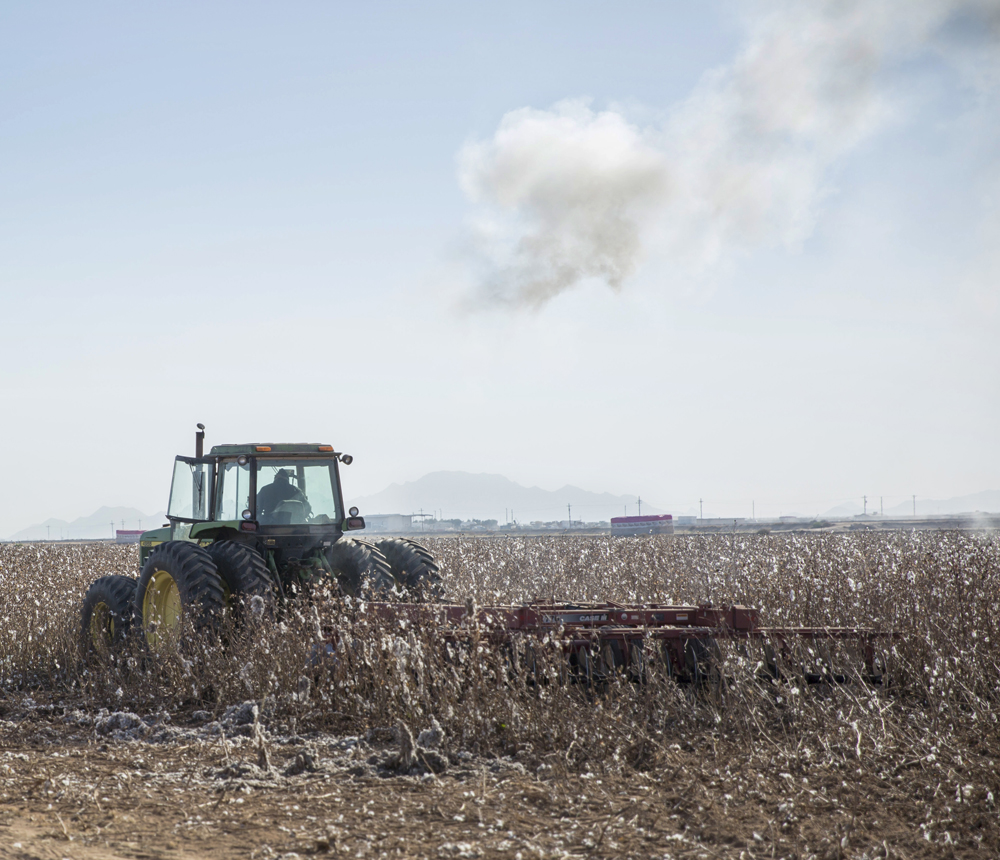 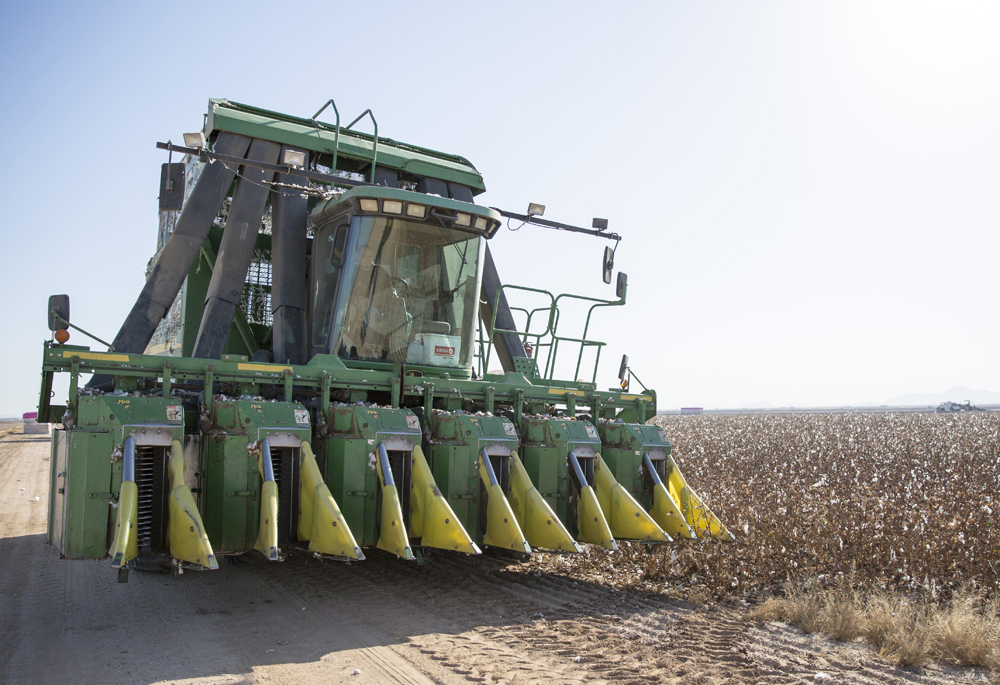 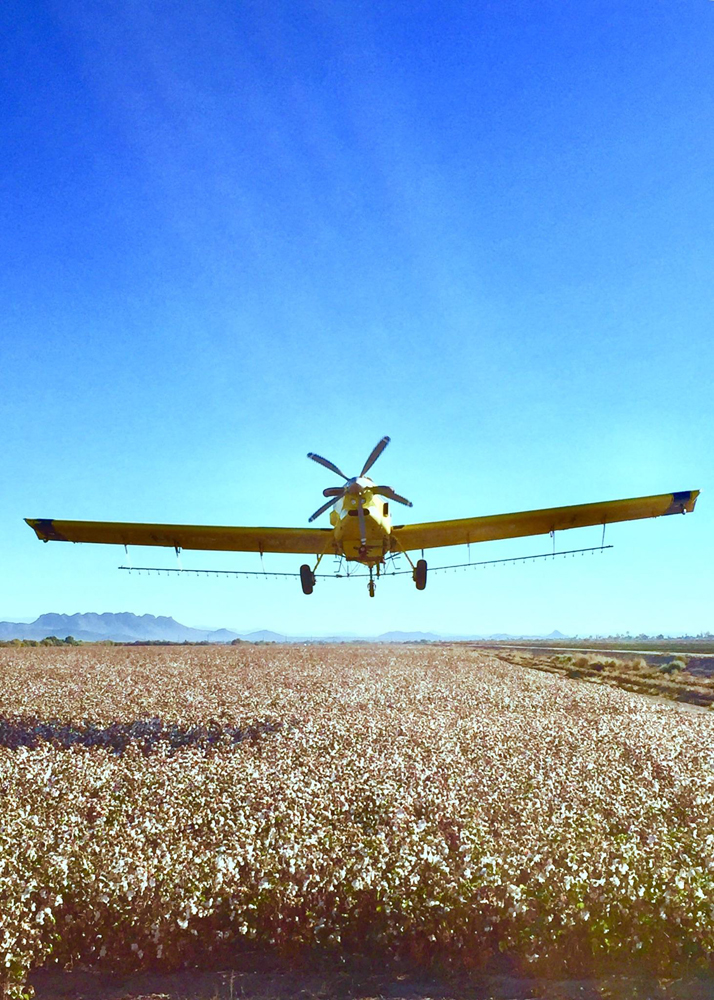 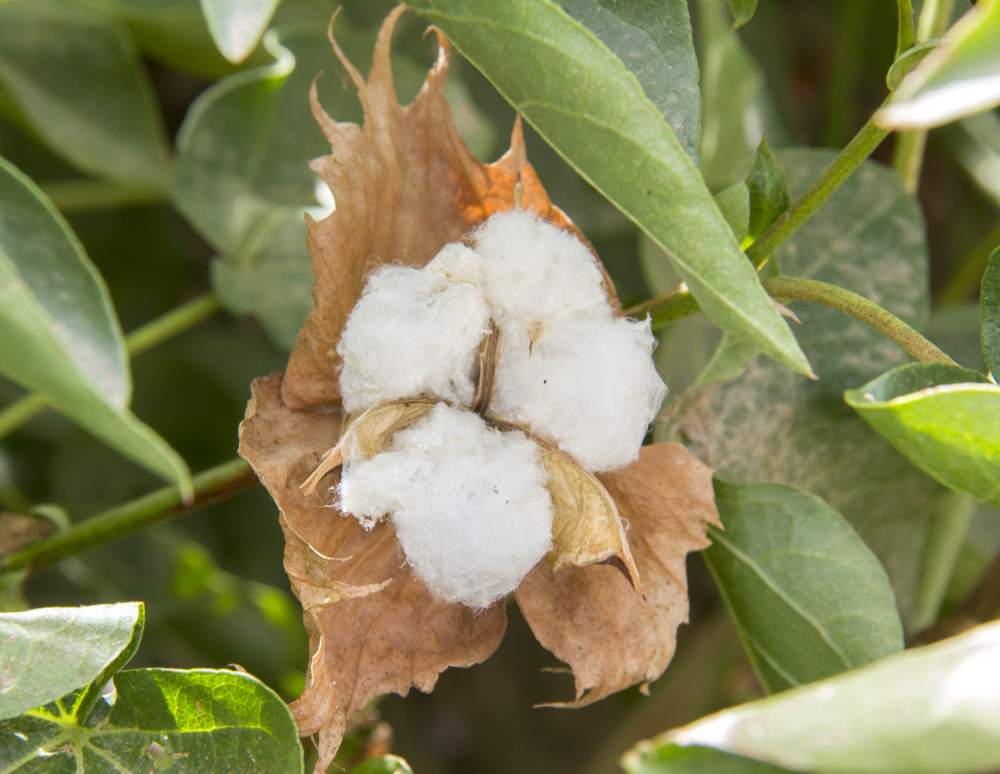 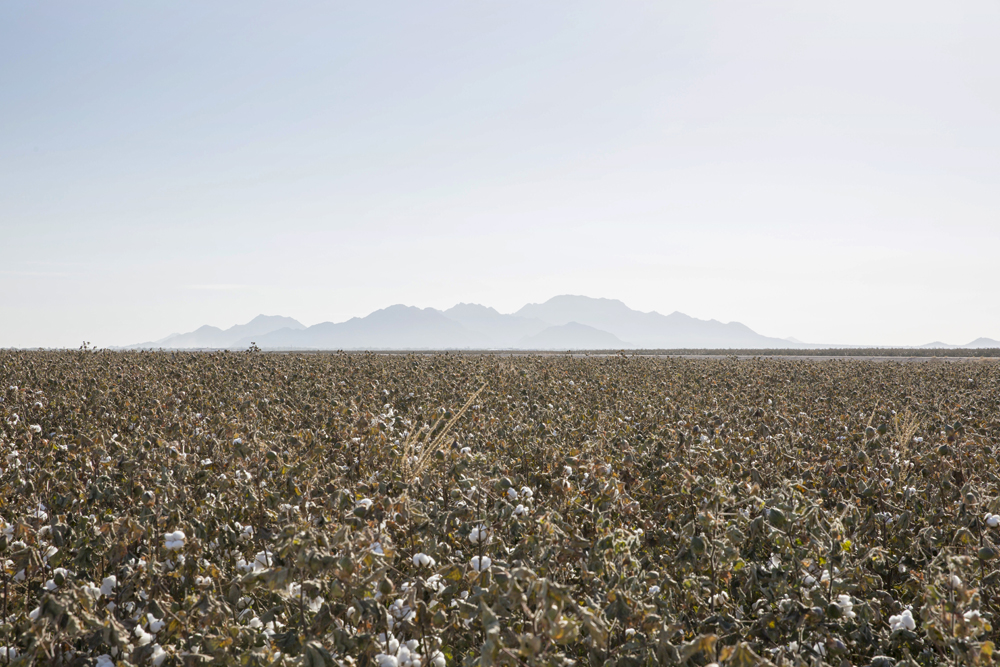 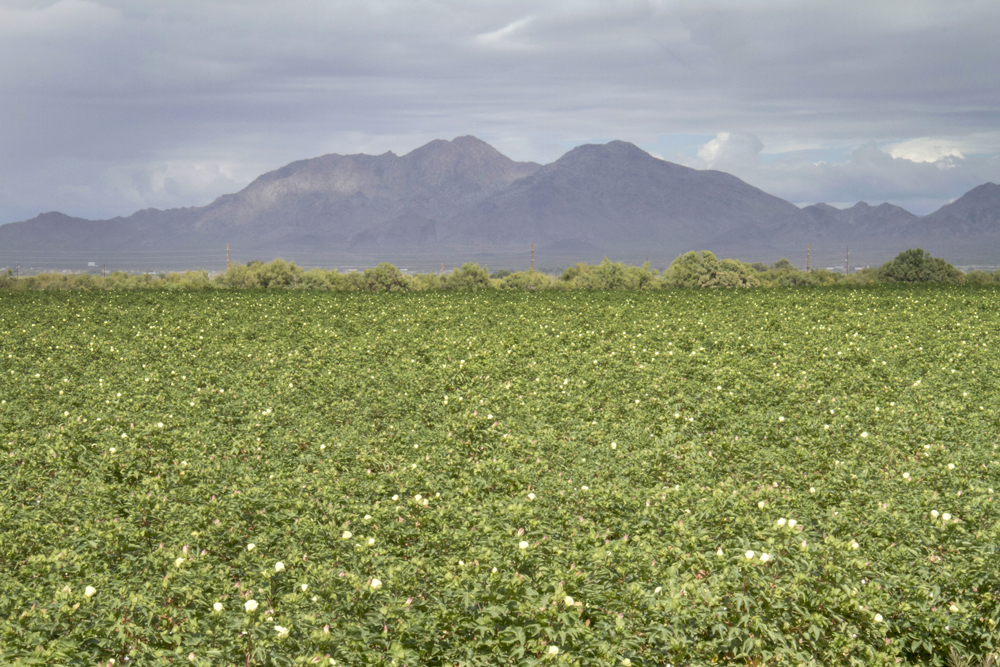