GRIN Articles > A’AGA: Something to be told

A’AGA: Something to be told

Just a few generations ago our ancestors felt the winter solstice was a key event. Among other things, it began the path back to normal temperatures. When darkness and his navoj or friend cold arrived, it was time to huddle inside a ge’e ki or big house and listen to stories. May this story of a vikol or great-grandfather bring warmth.

On December 14, the father of our country, George Washington died, 217 years ago. He was commander of the Continental Army, president of the Constitutional Convention and a gentleman planter. George Washington exemplified strength in both character and leadership.

The same could be said about an O’otham leader; he commanded an all-volunteer army, was “president” of a tribal convention and a gentleman planter. The roles of warrior, statesman and peace-maker were handled with character and leadership by both individuals. Though he may not have been the father of our jeved or land but Antonio Azul was a “vikol of our jeved.”

When the Maricopa or Piipaash came to our land, in the early 1800’s, Shon tal Keli or Old Soldier was the headman. During a battle against the enemy, Shon tal Keli was mortally wounded by a musket ball shot to his mo’o or head. When the fight was finished his body was cremated on the battlefield.

The war party returned to Vah ki or Casa Blanca, where all of Shon tal Keli’s cattle, horses and possessions were distributed among his relatives. A new headman had to be chosen but Shon tal Keli had no male heirs and to introduce a new lineage, it took longer for the village headmen to reach a consensus. A man who had served as a “lieutenant” in previous battles was chosen. (An Indian agent described O’otham leadership being passed from father to son somewhat like royal families.)

Anton Azul was selected at the dawn of a new Native world; in addition to tribal affairs, he had to deal with American soldiers and emigrants passing up and down our akimel. Anton was headman of Mount Top Village, an abandoned village three miles east of the Vah ki.

Anton served admirably and died of a sickness during the winter of 1854-1855. It took a while for elders to reach consensus in selecting Anton’s son as the next headman. Best estimates have Antonio Azul born around 1818. He fought alongside the Piipaash against their enemies thus strengthening our communal ties.

Like his father, Antonio assisted soldiers and provided food, lodging and escort to emigrants. When General Kearny came through our land via the akimel in 1846, he wrote, “These Indians we found honest, and living comfortably…”

Antonio Azul sensed O’otham and Piipaash lives would be affected by forces beyond our land. The United States obtained the land south of our akimel to the present border in 1853. Akimel O’otham, Piipaash and some Tohono O’odham officially became residents of the United States in 1856.

In June of that year, Antonio Azul along with Ki:mah, Vu:lo Vu:pui, Vivigitha and Piipaash Sikul Mat-hais and Malai traveled to Nogales to find out “if their rights and titles to lands would be respected…” They were assured the United States would guarantee all rights and titles.

As our akimel water diminished he considered moving to Oklahoma but when the people did not like the idea, he dropped it. When allotments were being considered, he argued for thirty acres of land for each family and opposed water from pumped wells.

Antonio Azul traveled to the other side on October 20 of 1910. His son Antonito took over tribal affairs but soon realized leadership now required one to speak English, understand the law, business and the Bureau of Indian Affairs. In 1911, a five member “business committee” was created to deal with tribal affairs. Kisto J. Morago, Lewis D. Nelson, Harvier Cawker, John Johnson and Jackson Thomas took over. These young educated men helped usher the Gila River Indian Community into a new era.

When Antonito traveled to the other side in 1923, the practice of appointing a headman ceased. With this new year, we can take comfort in knowing our ancestors faced the unknown with solid leadership. We adjusted and changed by looking backward and forward.

Information was gathered from Peoples of the Middle Gila by John P. Wilson, The Pima Indians by Frank Russell and “Notes on the Pima”,   by Elsie C. Parsons, 1928, American Anthropologist, vol. 30, no. 3 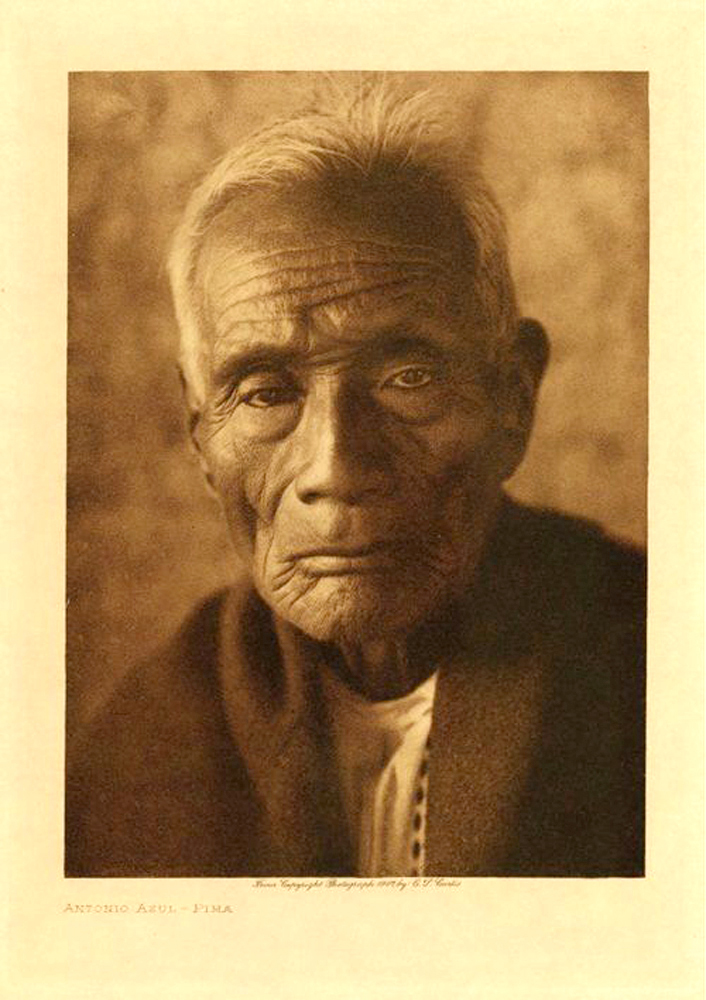