In years past, Gila River Police Department’s police officer recruitment drives have brought in around 30 applicants, but now, due to the development of a new recruitment strategy the department is receiving a record number of applicants, with over 150 people applying for the position on June 2.

The new recruitment strategy, developed by the Backgrounds and Recruiting Unit led by Sgt. Paul Maroney, created a hiring campaign that not only reaches every corner of the Gila River Indian Community, but also the Phoenix Metropolitan area and beyond.

This has led to daily recruitment drives at every service center in the Community, recruitment billboards off of the I-10, electronic billboard displays inside the Gila River Arena, job fairs at many local community colleges, and job fairs at Fort Huachuca, where hundreds of United States Marines are transitioning out of military service back to civilian life.

“When I came into the unit, we had approximately 33 to 36 applications for police officer,” said Maroney. “This was all by word of mouth or people [being there] at the right time, [the] right place. I would call it a low response,” he said. But now, due to the success of the new hiring campaign, the department recently received over 150 applications for the position of police officer.

“We are seeing a higher response,” said Maroney. Two years ago they received on average around 30 applicants, he said, but as they utilized their new strategy they saw a large increase in interest, with 113 people applying six months ago, and most recently, with over 150 people applying for the position.

In addition to the new advertising campaign, GRPD has changed their hiring strategy of posting a job application on mygilariver.com for 30 days, to having an open continuous recruitment policy.

This means individuals interested in applying for the position can do so at any time.

“This is a true dynamic change in the face of the department and what we are doing: proactively searching for new applicants,” said Maroney. “At the same time…our primary focus is Community members. We pushed really hard this past year to gain community interest in our positions,” he said.

Maroney said that while GRPD has been advertising for positions in the Phoenix area and even out of state, they have also been pushing hard to get Community members on board.

One day a week, for seven weeks, GRPD’s recruiting unit visited each of the Community’s district service centers in an effort to find interested tribal members, he said. GRPD also recruited at special events like the Mul-Chu-Tha Fair and Rodeo, local car shows, and even set up a booth at the Governance Center during a per capita payout, all in an effort to recruit local talent.

In addition, GRPD is gearing up to recruit Community dispatch personnel. Because the minimum requirement for the position is that applicants must be 18-years-old, the department will be visiting local high schools in search of future employees.

“We are specifically looking for Community members that go to one of these high schools to move in and become a dispatcher,” Maroney said.

If you are interested in becoming a GRPD police officer, a dispatcher, or would like to learn more information, call (520) 562-7114 and ask for a recruiter. 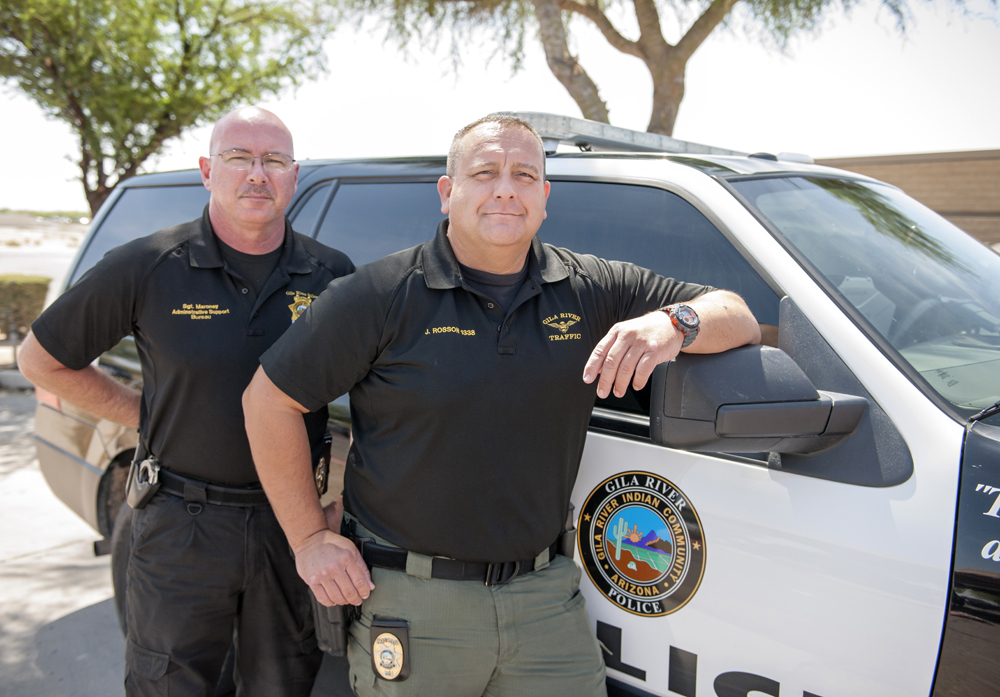